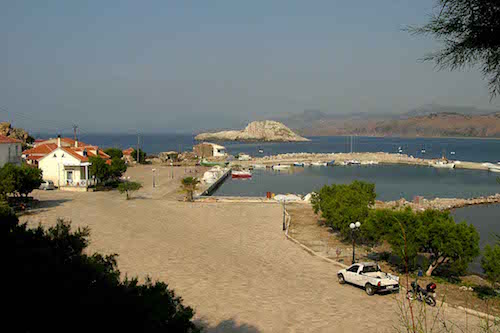 When the new Greek government took office in July 2019 they wiped the Ministry of Migration from the table. The responsibility for migrants and refugees was shifted between different ministries until it was decided to reinstall a Ministry of Migration. It took them five months to realize that Greece not only had an economic crisis to deal with but also has a huge refugee problem.

So they quickly made plans. The government believes that closed camps will deter the refugees. As if they come for holidays in camp Moria! A closed camp is a prison. As far as I know prison camps are fully against the rules of freedom in Europe. Not that Europe cares: as long as Greece does not allow the refugees to swarm all over Europe.

They also plan to close the last transit camp (Stage 2) on Lesvos (along the road from Skala Sykaminia to Sykaminia), even though everybody, including the police, is against this closure. It is a first rest place for refugees just-arrived after an often traumatic journey, where first aid can be performed and wet clothes can be changed, before their journey continues to Moria. After 5 months they will probably have to reopen this transit camp, when it will be proven that this camp is very necessary. Money seems not to be an issue, as the Greek government still appears to have millions to give to support a Greek orthodox school in America.

It’s not only the Greek government that is pretty short sighted. So too are the inhabitants of Gavathas. They tried to block NGO’s entering their village, afraid that when the NGO’s enter, there will be more refugees arriving at the village, as it is not far away from where the new prison camp is planned to be built. The scenic little village of Gavathas for years has continued its little fishing life, undisturbed by masses of tourists coming to watch the same sunset that one finds on Santorini. But their quietness is in any case soon to be finished. Already a luxury campsite (glamping) has been installed a little outside of the village and there are plans for more big tourist accommodation — almost as if the island had no tourist crisis or as though the never completed hotel that ‘shows off’ at the entrance to the village has ever been a success.

On January 22 Lesvos (together with Samos and Chios, also confronted with the same new measures from Athens), will have a general strike against plans nobody believes in.

At the end of the month the UK will leave Europe. Sometimes I think this would also be a good idea for Greece to leave this small dictatorship. Without all those laws from Brussels the Greek taverns would get a breath of fresh air and Greece could build up its quirky state. There is however a huge risk for a Grexit: were Greece to depart from under European wings, The Sultan will take advantage. And even without a Grexit,he could take some of the Greek islands, because he has millions of refugees to use as a threat and I wonder if Europe actually cares if some of the Greek islands just change flags. As long as the refugees remain here, in ‘un-European’ camps, under ‘un-European’ circumstances. I am ashamed to be a European.