Alfa Heijn, or the supermarketizing of Lesvos 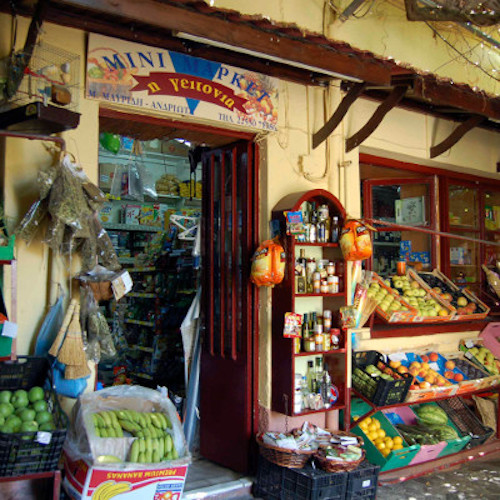 Unexpectedly the winter has descended on Lesvos with low temperatures, pretty strong storms and snow. For days no ferries have appeared between the high waves, meaning that the shops have slowly emptied. The smaller shops with local products still have enough to sell, but the bigger supermarkets are facing empty shells. In western Europe, and certainly in Holland, all small grocery stores have been chased by the big supermarket chains. Not yet true in Greece, but the assault has slowly started.

Some fifteen years ago going to shop in Molyvos meant you only had some small grocery stores to go, the ones that still prosper in different small villages. If you wanted more, then you had to go to the one small supermarket in Petra, nowadays called Proton. This situation hasn’t changed much, even though most grocery stores in Molyvos have now become little mini-markets, fully stuffed with a larger offer of products.

For the real supermarket you had to go to Kalloni and if you were a serious shopping junkie, you drove to the capital Mytilini, where the Alfa Beta (pronounce Alfa Veta) with its large choice of products came closest to a Dutch (or West European) supermarket. The shopping party became even wilder when a Lidl also settled in Mytilini.

I hate the monopoly of some huge grocery chains, like the Dutch Albert Heijn. It is through their efforts that at least half of the population of Holland doesn’t eat Dutch anymore, but Albert Heijnish instead. In Greece there still is not yet that big push to consume. Just like Greek food, shopping lists remain pretty simple.

But Greece also ‘supermarketizes’. Fifteen years ago there was just one supermarket in Kalloni, today there are four: the Alfa Beta came last summer and nestled right next to Masoutis, across from the discount In Market and some tens of meters away from My Market. Greeks seem to love to compete in close proximity to each other. Now we have to wait to see who will survive.

Masoutis is a Greek family-run supermarket chain, opening its first shop in Thessaloniki in 1976, nowadays expanded to 200 supermarkets, mainly in the North of Greece and the northern Aegean islands. My Market belongs to the Greek Metro SA and opened its first shop in the same year as Masoutis. Proton is also Greek, but with independent stores, each retailer owing shares. Lidl, one of the biggest concerns in the world, is owned by the German family Schwarz.

Alfa Beta started in 1939 as a small grocery store in Athens, run by the two brothers Vassilopoulos. In 1970 they opened their first supermarket and now have about 500 stores all over Greece. In the 90’s the Belgian Delhaize Group acquired Alfa Beta and it now has merged with the Dutch Ahold (orthe very famous Albert Heijn).

Since I now know that Albert Heijn more or less has a hand in the ‘supermarketizing’ of Lesvos, I look at Alfa Heijn (as I call Alfa Beta now) differently. Also the Kalloniates (inhabitants of Kalloni) hesitate to enter the shop of Alfa Heijn: most of the time the place looks empty, even though they have a large offering of products, wide shopping lanes, great discount actionsand friendly staff (some Greek supermarkets seem to specialize in plainly unfriendly staff).

Greeks eat what the season offers; even though you may find a tomato in the winter, it doesn’t taste like a hot Greek summer. In winter there are various cabbages, beans and the winter salad (marouli) that reign over the dinner tables. The Greek kitchen does not change a bit, even though supermarkets try to change this with new products and fast food. Only ginger and avocado seem to have snuck into the Greek eating pattern. It is a challenge to create different dishes with the meager offer of winter vegetables: broccoli puree with walnuts and cheese, stir fried white cabbage with peanut sauce, cauliflower curry and so on.

But there are times you long for something different. So sometimes I sneak into the Alfa Heijn, where they have chicory and even Brussels sprouts, a non Greek choice of foreign cheeses, a big assortment of different beers and a good ham. They bloody well know how to seduce clients, though you may be left wondering which Greek eats chicory or Brussels sprouts, or drinks Belgian beer. I do not have to be afraid that the island will ‘supermarketize’ too quickly. Greeks do like their own fantastic food too much.

Oops, did I just provide publicity for Alfa Heijn? That was not the intention.