Where have the olives gone? 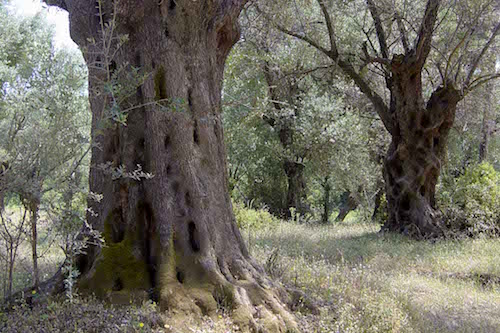 These days the Greeks mainly talk about the medicane, a rare hurricane on the mediterranean sea. Just a few days ago a big storm prevented the ferries from functioning and, in a few hours, blew the summer completely away, while temperatures dropped considerably. Combined with a warm sea this makes ideal circumstances for the birth of a storm-like a hurricane.

Crete and the southern mainland (including Athens) got code red weather alarm, but also here in the north of Lesvos the wind keeps on blowing, contrary to the weather forecast. They also predicted rain that has not fallen. The island is longing for some water from the heavens, but except for a little local shower, all serious black clouds sailed across the island in search of the land of the sultan (where, for the last month, there was a lot going on in the sky).

At least the storm blew all the almonds out of the tree, save me the trouble of batting the poor tree in order to get the nuts. Now I just have to collect them from the ground. However the rain for the olives will be too late, because most olive trees have already lost all their fruit. There are only a happy few that wave in the wind with branches filled with light green olives. Lesvos awaits another crisis: an olive crisis.

For centuries olives and olive oil provided the main income for Lesvos. Until the Ottoman Empire fell, there was lively international commerce in olive products, but since then the island is only an empire with small farmers, who manage thanks to the olives to survive the Greek crisis. Now they do not have one olive!

Most owners of olive fields I spoke say the source of the empty trees was the mediocre summer without a real heatwave and with some serious rainfall in July. Ideal weather for the dakos, a fruit fly that prefers to lay its eggs in the olives, this way killing the fruit. These insects had the time of their lives last summer, without being killed by high temperatures or without dying from thirst.

At least the island is not besieged by the olive pest, Xylella fastidiosi, a bacteria causing great havoc in the olive grows of Italy and Spain. This bacteria comes with a spitting bug and prevents food and water from reaching the branches. Entire groves have been dug up because of this lethal illness. This pest-epidemic has not yet reached Greece. Which is lucky because the island has even more olive trees (12 million) than Greece has inhabitants (nearly 11 million). Imagine how the island would look without the green silvery trees.

Although there will be not much to harvest this year, some people still have olive oil — last year having had such a good harvest — the price however was so low that lots of people did not sell their oil and kept them in their containers. Anyhow, the mayor of the island has already asked the government for compensation for the farmers who will see their income decline this winter due to the lack of olives. Likewise, there will be a minimal number of people hired to harvest those rare olives, a number that already decreased because of the crisis.

In Europe you can find several very old olive trees, some said to be thousands of years old, like The Olive Tree of Plato, in a field a bit out of Athens. According to the story this was one of the twelve direct ascendants of the first olive tree that the goddess Athena gave the capital. Plato settled his academy under this huge tree where he taught his pupils. Last century the tree was a kind of tourist attraction, until 1976 when a bus ran over it. Part of the large trunk was acquired by the agricultural academy of Athens. The lower trunk remained in the soil and even grew new roots. In 2000 when the price of heating oil was so high due to the crisis, many people took wood illegally, including the trunk of this famous trees, now disappeared into thin air.

Lesvos does not have such a famous tree, but some parts of the island have trees that certainly are hundreds of years, maybe even thousands of years, old and will have much to tell, if they could only talk. Lesvos without olive trees is unthinkable. It must have been a horrible sight when in 1850 most of the trees died during the Great Frost (when, in just a few hours, the temperature dropped below zero). The island overcame this disaster quickly by importing and planting many new trees.

However we can live with a Lesvos without olives for a year. The owners of the trees will have time to clean their olive fields: repairing walls and fences and dig over the surrounding land. A friend has even said that it is good for the trees to not have fruit for a year: this way they have a rest, which can only lead to a better harvest next year. But then they certainly don’t need the medicane raging over them. The hurricane seems to be heading towards Lesvos in the direction of Turkey, but hurricanes are impetuous and difficult to predict. So now we can just wait for this rare Mediterranean phenomenon.