The small dependance of the Open Air Graffiti Museum of Vatera 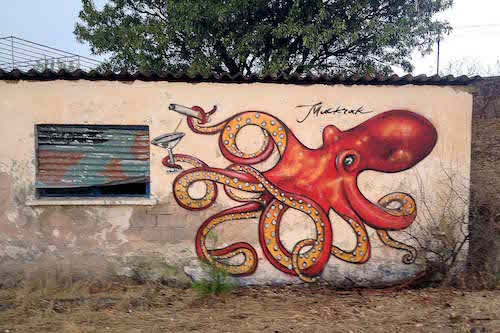 (The Smoking and Drinking Octopus at Eftalou)

After the refreshing rain I took a walk along a little road that I hadn’t been on for some time. Shimmering in the distance I saw an enormous red octopus. For a few seconds I thought I was hallucinating, because I have often passed the little old deserted military camp and there was nothing to be seen. But now on one of the buildings there was a huge fat red octopus with a cigarette and a glass in two of his hands.

The dilapidated hotel Sarlitza in Thermi, the ruined Hotel Arion at Molyvos, the nightclub at Skala Sykaminia and the never finished hotel in Vatera are icons in the Lesvorian landscape. Not such good ones, because they all are reminders of a tragic story.

I do not know the story of the night club at Skala Sykaminia. In the Sixties the Hotel Arion had been open to clients for one year and then the bank took it because of bills not being paid. Hotel Sarlitza was a Turkish spa hotel and I guess that after all Turks were thrown off the island in 1923, the hotel started to slowly die. Now the beauty of the building is being recognized and there are calls for it to be restored. Each year I read in the papers that the building will be put back to its glorious old state, but each year nothing happens. Then last week I saw a photograph of the garden being restored. But I wonder if we will ever see a time when the lights will be lit again in the Sarlitza.

Lesvos Palace has another tragic story, showing how the island ‘welcomes’ grand hotels. In the Seventies Aris Skafidas bought the land at the end of the long beach of Vatera and started building on this dream location. Sometime in the Eighties the 1000 bed hotel was nearly ready: missing was a proper road, that would cross the river (that is very full in winter) and link the hotel, some two kilometers away, to the main road. Building a road and a bridge is peanuts for someone who was once a friend of Onassis and had built plenty of buildings on the Greek mainland. But first the road needed a permit from the municipality. However, no license ever came and even when Skafides’ company offered to build the road and bridge no papers ever showed up. And again the same situation recently when a Swiss, German and Chinese consortium tried to lay hands on the buildings. Lesvos Palace has never opened.

The only time the hotel has been used was during a music-graffiti festival, a few years ago in Vatera. Artists from all over the world created a tribute to Theophilos and painted great art on the naked walls of the spacious, empty lower floors. The artists also had a great time putting paint on the walls in the upper floors. I now call this hotel the Open Air Graffiti Museum of Vatera.

According to the organizers the festival was ready to take off another year. However they did not get renewed permission and the second event had to take place in Mytilini: not such a success – because the graffiti was spread all over the city. Now the festival has disappeared, but has left a great amount of beautiful wall paintings, which is better than the numerous modern Greek ruins we see, of which the most ugly is to be found at Gavathas. I do not know the story but I am amazed that somebody got the permission to squeeze a hotel complex between a few houses at the entrance of the beautiful village, buildings that – by accident? – resemble another lost building complex on the Petra boulevard, in the direction of Molyvos.

I am honoured that now we see the legacy of the Vatera Graffiti Museum in Eftalou on a deserted military camp. Along with the smoking and drinking octopus, in another little building there is a beautiful white horse lead by two doves, on its back a sleeping girl. On another shed there are two signatures.

Graffiti has been used to communicate since ancient Egyptian, Greek and Roman times. In the Seventies when the punks stood up, graffiti became very popular and was recognized as art. I hope that graffiti artist soon will go to Gavathas to turn that ugly concrete building into lively art. These days there are messages enough to be distributed, even if it is to tell the municipality of Lesvos that they should reconsider their licensing policies around hotels, that could – or not? – bring more allure to the island.