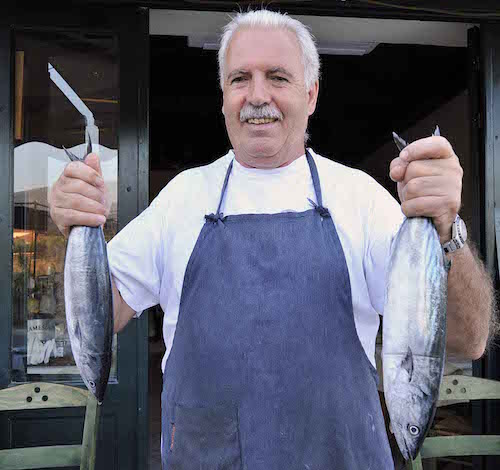 (Angelos and palamides in better times)

In ancient times people didn’t gaze out over sea to admire a flamboyant sunset. They were looking out for hostile sails on the horizon, or waiting for the return of loved ones after a faraway and dangerous journey. The sea in those times meant danger. In the salty water lived mythical sea monsters, so all sea travels were only for real heroes, who had to keep on the good side with many gods, so that neither storm or doldrum would break up their journey.

Lots of Greek gods used to rule over seas and oceans. The eldest was Oceanus, the best known Poseidon. Other lesser gods were Nereus, Glaucus, Proteus and Phorkys. Glaucus, born as a mortal fisherman, became a god after a piquant affair with Circe, daughter of Helios, who fed him magic grass. He is the protector of fishermen.

There are not many stories about fish in Greek mythology, many about dolphins, but those are mammals. Concerning the other creatures then living in the sea, like those awful sea snakes with hundreds of heads, those were not fish neither. The goddess taking care of fish was Amphitrite, daughter of Oceanus (or Nereus, other people say) and spouse of Poseidon. She was the only one who could calm down this mighty sea god when he was in one of his volcanic moods, shaking up the earth. Amphitrite gave birth to dolphins, seals and even to some of those terrific sea monsters.

And there is the story of Aphrodite and her son Eros, who had to flee when the dangerous giant god Typhon assaulted Mt Olympus. They were saved by two heroic fish (or changed into two fish), who helped them escape through a river. Later, to thank them, they were immortalized between the stars as the sign pisces (fish).

Nowadays all seas have been explored and the gods chased away. The waters have been mapped, just like their dangers, which are however defied by refugees, changing many a sea into a graveyard. No fish nor dolphins have come to their rescue.

There are more changes. The sea is now free of mythical monsters, but it won’t take long before the sea will also be free of fish. Countries discuss fish quotas, if that will help. It’s not just overfishing but also our plastic footprint that make the sea more and more into a hell to live in. The gods should be more than mad at us.

On the Greek islands different fish are eaten in different seasons. In the summer there are sardines, in the winter there is plenty of shellfish. In autumn along comes bonito (Sarda sarda), named palamides in Greek. Lots of them end up in restaurants. In 2008 the huge empire opposite Lesvos, Turkey, hauled 18.000 tonnes of that tasty fish out of the sea. From September on, you can observe lots of huge fish trawlers in the Turkish territorial waters, working day and night.

Now, eleven years later, those big fishing ships emptying the sea, still appear each year. But no palamida on our plates. There were none. Eaten by the Turks? Their catch will probably be tenfold, because they now also have to feed an extra 4 million refugees, mainly from Syria. In ancient times Syrians did not eat fish. Because of the myth of Aphrodite, Eros and the pisces. In the Syrian version of that tale they fled over the river Euphrates. Another Syrian myth tells that after this rescue action, a huge egg appeared floating in the Euphrates. The fish Aphros en Bythos helped it ashore and out of the egg came the Syrian counterpart of Aphrodite: Ashtarte.

A new record for refugees, 14,000, are now trapped on Lesvos, a large number of them from Syria. They will not miss the palamides: Syria never built up a serious fish culture. But I did, and I wonder if these delicious fish are all caught by the Turks or is it the sea gods that finally have arisen to punish us humans because we have made such a mess of the seas.