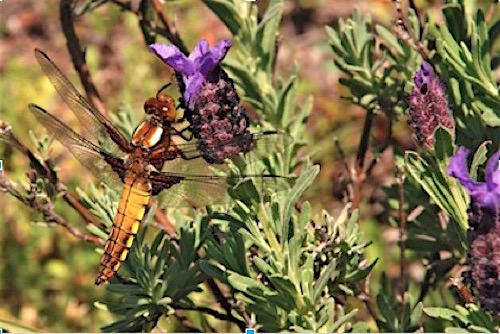 We live in a strange world. We don’t live in the Sahara, but we live under the Sahara! For a few days clouds of sand have covered the sun and the blue sky. I’m not sure if the high temperatures are due to this Sahara sand. But it’s certain that I had to dig deep into my closet to find some summer clothes. At 28°C even a light sweater is too hot.

Not only Lesvos is carrying the weight of the African Sahara, but the whole of Greece and who knows what other places in Europe. In Athens people with respiratory problems have been advised to stay indoors.

Our friend and professor of dragonflies, Wolgang Lopau*, is however excited by this clammy weather: will the African Schrabacken dragonfly (Anax ephipigel) hitch a ride with the Sahara sand? Wolfgang Lopau travels as much as he can around Greece to visit the haunts of the dragonflies. His home is Lesvos, where you can find at least 46 varieties of dragonflies. That makes Lesvos the biggest dragonfly island in Greece, as well as the best researched island in Greece.

That’s why we were happy to take Lopau to one of our favorite places on the island, which he did not yet know. Certainly it’s a place of interest to him because the loamy soil there means that there are a lot of little ponds, even during hot summers.

Palios is a region south of Mandamados, towards Mytilini. Already next to Clio, by the road you will see a little lake that shows the loamy soil we’re dealing with. This area stretches for kilometers down to the coast and it offers a landscape of low mastic trees, strawberry trees, wild lavender, Cistus bushes and little ponds where frogs, tortoises, ducks and dragonflies live.

Close to the little hamlet of Palios there are graves thousands of years old. But now we are not so sure if there are graves. The square holes cut out of stone do seem like the graves they found here in Molyvos. But there are scientists that say that they could also have been hot air ovens where pieces of loam were baked in the sun. When you consider this loam rich region, this theory is fairly possible.

Anyhow, Lopau was very happy with so much water. I saw him thinking hard: what dragonflies were hiding under the water?

A dragonfly starts as an egg in the mud, just below the waterline or scattered over the water. From the egg comes a larva which has to shed its skin seven times, which can take anything from a few months up to five years. During all that time the larva hides in the water. At the last shedding of skin it will crawl out of the water (around May) and then the dragonfly wriggles itself out of the larva and takes a first short flight to find a place in the sun to dry.

On this warm day in April we saw some early heather dragonflies (Sympetrum fonscolombii) that were encouraged by the hot weather to take to the air. Also a Libella depressa, which had just shed its last skin and flew out with glittering brand new wet wings to find a place in the sun to dry.

Dragonflies are like fairytale creatures, with their four fragile transparent wings and a usually brightly coloured body. They live by ponds or lakes, a very few of them daring to live close to running water. Whenever you are looking for dragonflies, you have to search for water. Which can be challenging in Greece. Lopau has learned to study the landscape. For example where there are oleanders there is usually water. However it’s best to ask the locals. Most of them kind of know dragonflies. But when Lopau shows them his book full of pictures of dragonflies, they generally can point him to a secret hidden little pond.

The day we went to Palios the Sahara sand was still not there and the sun had the sky to itself. Although we knew it was too early for dragonflies, Lopau turned out to be a mine of information. For example, I have no knowledge at all of birds, although I live on an island famous for its birds. At this moment bird watchers are flocking to the island to look for the 320 species, (according to the birdwatchers bible Birding on the Greek Island of Lesvos by Richard Brooks), that live or take a break during their migration on Lesvos.

Even though we were mainly looking down in order to find dragonflies and orchids (Palios was full of a few kinds of orchids), thanks to Lopau in a few hours we saw an impressive list of birds: a Black Stork (Ciconia Nigra), a Ruddy Shelduck (Tadorna Ferruginea), a Cretzschmar’s Bunting (Emberiza Caesia), a Crested Lark (Galerida Cristata), a Hooded Crow (Corvus Corone Sharpii), a Little Egret (Egretta Garzetta) and a Northern Wheatear (Oenanthe Hispanica).

Who makes these names?! Here is another list: Caloteryx Virgo Festina, Platycnemis Pennipes Pennipes, Ischnura Elegans Ebneri, Hemianax Ephippiger, Crocothemis Erythraea. They all live on Lesvos and are names for small creatures: welcome at the Dragonfly island. Another side of nature that makes Lesvos a very special island.