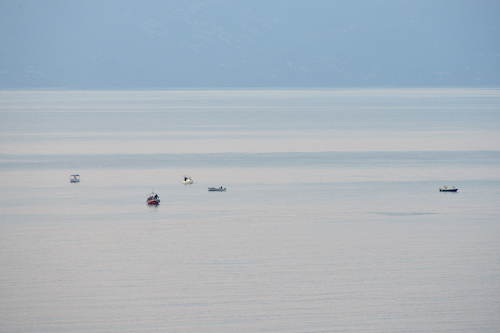 A Dutch proverb says you can ‘live like a God in France’. But in Greece you live with the Gods. Each year this is proved by the Alcionides Meres or Halcyon Days, also called The Little Summer of January. The Gods must organize these warm days, how else would you explain this phenomenon?

The warm weather encourages the Greeks to empty their last olive trees and it’s a wake up call for those in nature that are behind, like the almond trees this year, to prepare for spring. Aeoles, God of the wind, remains calm. The sea is like a mirror, where grumbling fishing boats have happy fishermen, because the fishes these days are eager to get caught. A fisherman from Chania, Crete, was lucky enough to catch a squid of one and a half metres! When you cut this huge squid (these big ones normally live in the deep sea) into rings, you can hulahoop with them!

The myth of the Alcionides Days shows that although the Gods could be cruel sometimes they also showed some mercy. Alcyone, daughter of Aeoles, married an earthly king, Ceyx. They were so in love that they sometimes called each other ‘Zeus’ and ‘Hera’. This made Zeus mad. So when one day Ceyx was travelling over the sea, Zeus produced a big thunderstorm and Ceyx was struck by lightning and drowned. Alcyone was so grieved by the death of her husband that she threw herself into the sea and drowned as well. The Gods took mercy. They changed the pair into seabirds (ice birds) and Aeolus made sure that for two weeks in January the weather would be nice so that the birds could build a nest and lay their eggs on the rocks.

The inhabitants of the city of Arta (North West Greece) also showed their mercy, after priests published a letter in the local paper about the shameful circumstances of the life of local foreign workers. These workers live a life like in the middle ages and are exploited by the local farmers and businessmen. Greeks do listen to their papas, but the priests were still surprised when after publishing this letter of mercy, goods started flooding in, as well as free medical treatment.

Many immigrants in Greece come from neighbouring Albania. But just as many Greeks did in the Fifties in America and Australia, the Albanians now know how to make a good living. That good that they leave the countryside, where living conditions are the most difficult for them. And now the Greek farmers are panic stricken, because they have nobody to do their harvest. A Farmers Syndicate is now talking about getting some 50,000 workers from Egypt, in order to solve this problem.

Last Christmas an Albanian friend of ours travelled to Italy, to visit some relatives there. She was stunned by the price of goods in the shops. She told me that her relatives earn twice as much money as they do here in Greece. But then they have to work the whole day, from early morning to late at night, leaving them no time for other things.

She said here in Greece she has to work hard as well, but in Greece work finishes early, which leaves time to spend going for a walk, helping the kids with their homework or going out to dinner (one of the things that is still relatively cheap in Greece). According to her, life in Greece has much more quality than in Italy.

The Greeks may not agree with this, because thanks to the latest political scandals (see the previous Lesvos News), they no longer trust their politicians or the media.

Residents of an area in Athens discovered that the trees in a little park were being poisoned, (yes, they discovered an alternative for arson) so that a parking garage could be built. The residents went to a high court to get these plans overturned, because they no longer trust their local politicians.

But on a nice Sunday during the Alcionides days, all cares are forgotten. Then the Greeks go out with their whole family. They go to picturesque places like Molyvos, to take a little stroll and no political scandal can stop them from flocking to the restaurants by the sea.