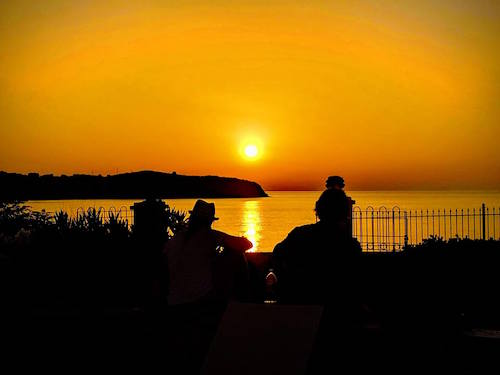 Tourism has become a plague. I am wondering what’s pleasant about standing like a huge flock of seagulls to stare at the sunset on a rock in the sea, or being surrounded by masses of people visiting an old temple while the sun mercilessly burns legs, necks and noses. Most people nowadays just want to take a picture, even though the internet is already filled with the same photographs.

Whilst one part of the world’s population is, by foot or by wonky boat, trying to escape wars and other life-threatening events, the other part flies unconcerned to those regions not yet touched by misery. It is a strange world, with people who do not mind waiting for hours to catch a glimpse of Holland’s most famous painting The Night Watch (from Rembrandt van Rijn), who parade in swarms over the canals of Venice and who wait patiently for hours to enter the Notre Dame at Paris.

Packed camping sites, overcrowded beaches, miles of traffic jams, entry tickets that have to be booked years in advance: what makes people want to waste their free time amongst so many other people? Some cities and other hip places now are fed up with the masses. Not only Amsterdam, Venice or Paris, but also the Greek island of Santorini has called out for change: millions of people last year visited that small once ‘fairy tale’ island. Now it must be hell because of long queues, slowly shuffling through tiny streets and places packed with people trying to take ‘romantic’ pictures of a sunset. All in the blistering Greek heat.

It is not only Europe that has problems with too many visitors. In Thailand Maya Bay has been closed temporarily, because 3000 to 4000 people flocked daily to this beach (known from the movie The Beach). In the Philippines the entire tourist island Boracay has been closed for some time for reorganizing and the old Inca village Machu Picchu in Peru has become only accessible to a restricted number of people. This is just the beginning of a long list.

So you might say that the not-even-a-century-old phenomenon of mass tourism is derailing. In past times traveling for pleasure was for the rich. It was at the middle of the 20th century that the working classes finally were able to go on adventures in the world. Not having the money to go far, they were happy to spend a day at the beach or elsewhere in nature. The Sixties brought cheap flights and so began tourism by plane: now at risk of going too far.

Nowadays, for the average European it is normal to travel many times a year by plane. Thanks to Airbnb and far too cheap air fares, city breaks have become a normal time-passing for weekends. This brings extra problems to the heavy polluting aviation industry and sees air space slowly silting up. Airports like Schiphol (Amsterdam) just keep on growing, no matter that security comes with greater risk.

Greece always has been a holiday country. The islands Rhodes, Crete and Corfu were, along with mainland Athens and Delphi, the main attractions and for centuries were part of a tourist travel route, thanks to their archaeological treasures.

Most modern tourists no longer like to stare at old stones. They prefer to settle down in an all-inclusive resort, where they can enjoy themselves the whole day around the pool, getting served free food and drinks. They do not care where the resort is: at the Turkish Riviera or on any kind of island. As long as the sun shines and where there are drinks a plenty.

It is only for some decades that Lesvos has been on the tourist map. It’s an island that does not offer famous ancient sites. In the eyes of the Lesvorians the crazy numbers of people visiting Santorini (and other islands such as Crete) would be a dream. Thanks to the refugee crisis the island of Sappho has been somewhat left alone; even though the sunsets can be as spectacular here as on that extinguished volcano with white villages.

But times will change: once tourists become allergic to the other vacationers and the uniformity surroundings many holiday locations. Soon there will come a time when it will be ‘hot’ to travel to quiet places, to worlds that turn around their inhabitants and their life-style and not around tourists. Then Lesvos will be the most authentic Greek island.

However, I fear for the time when this mass of visitors, now terrorizing other tourist locations, discovers Lesvos. The quietness found here on Lesvos, disturbed only by chatting crickets, is an experience many people have lost. However it may only last until the tourist tsunami also reaches Lesvos.