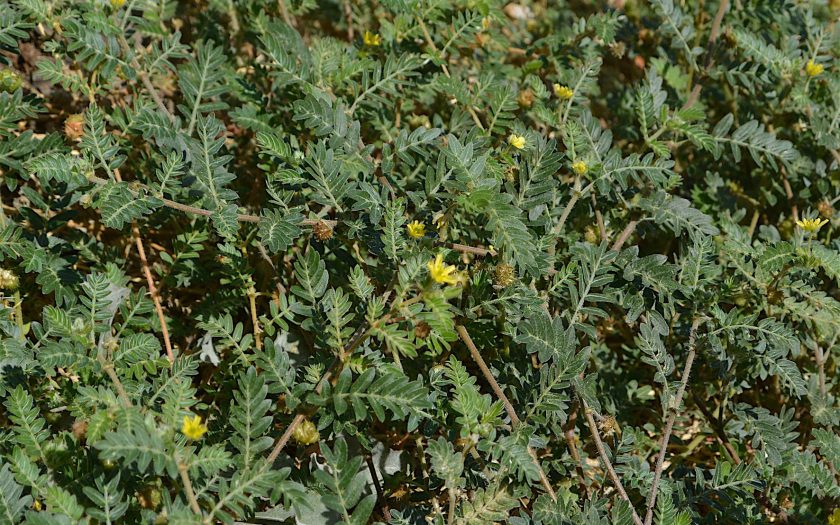 My garden is beset with problems. They grow in the midst of the summer and the disaster spreads pretty fast. It is like a herd of constantly growing pushpins. The only defence is to wear proper shoes. Worn-out flipflops just don’t do and even in your house you are no longer safe.

The summer has many advantages, but the Devils thorn is a returning plague, — worse than mosquitos or wasps. I am talking about a stupid little plant, with teeny-tiny yellow flowers and strong thorny fruit that you will only notice when it sticks into your foot or flipflop.

Tribulus terrestris is the latin name of Devil’s thorn. The Greek name, τρίβολος, has something to do with water chestnuts, according to Theophrastus. But maybe he mixed up two plants: that is for the scientists studying the Old Greek language to figure out. The translation of its Latin name is more to the point: ‘problem on the ground’ and that is what I have.

The little branches with long leaves at both sides are rampant within the grass and other surviving weeds, as well as on and along the sandy paths. The alarm bell tolls when the little yellow flowers appear. Within a week the fruit with 2 to 5 razor sharp thorns is ready to fall. They vaguely look like a bull or goat’s head — reason for more nicknames: Bullhead or Goat’s head. A field with Goat’s head is the same as a bed of nails: you do not want to venture into it.

Its now the time that you hungrily reach for the figs that hang, ripe and sweet, in the trees. Also this year the grapes are early and their juicy ripeness seduces you to pick them. They are the-end-of-the-summer fruit that comforts you because this warm season has had its best days. But here in the garden they look more like forbidden fruit: to reach the fig tree you have to pass a Devil’s thorn field, so as soon as you reach out for a fig it is: Ouch, a needle in your foot!

No need to pick the fruit of the Bullhead. They roll or propell themselves toward you. They stick onto shoes and feet and this way they also invade your house. Riding a bike or walking bare foot is not done anymore; it’s best to avoid a punctured tyre or holes in your feet, and especially the merciless pain. They even can cause a real plague. In a town in Oregon, America, you can earn a dollar when you deliver a garbage bag stuffed with Tribulus terrestris. I can send them a shipload.

However there are also people who gather this prickly fruit for the herbal industry. I do hope they use machines. With a big aspirator to collect those devilishly thorny things? I’d like such a machine sent over to the field here. Because this herb is worth its weight in gold: those stinging seed-boxes can be ground into a blessing aphrodisiac, proven by more than one scientist. They should plant plenty of these herbs in China and Vietnam: there people are so desperate that they pay fortunes for elephants’ tusks and rhinoceros’ horns that may improve their libido. This way those animals would not have to become extinct and people would pay far less money for their pleasure.

In the grapevines it also is said that the herb increases testosteronelevels. Athletes and other people pimp their bodies to deliver better performances. For this reason this nasty prickly herb is now popular amongst sports people. Obviously, as a powder or a drink; I don’t think those agitated people would like to have a bed of nails in their garden.

The thorny fruit has more positive medical uses. In the ayurveda for example it is called the ‘Cow’s hoof’ and is used for the wellbeing of kidneys, bladder and urinary tract. In Kashmir they believe that ‘Cow’s hoof’may slow down fevers.

Maybe I should seriously consider turning this misery into something positive and start to collect this nasty herb. When I walk over an area rich in Bull’s heads – after just few steps there are already hundreds of Goat’s head stuck to my thick-soles shoes. Who wants to buy them?