There were the Romans 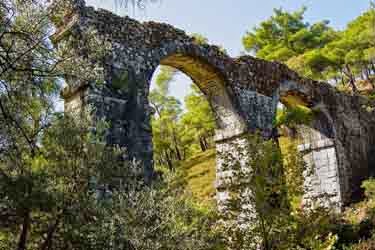 (Part of the aqueduct near Lambou Mili)

The American writer John Williams (1922-1994) left three finely written novels; their subjects differ considerably. Butcher’s Crossing (1960) is about the slaughtering of the buffalo in the USA, Stoner (1965), about a farm boy who became a professor at the university and his last novel Augustus (1972) is about the Roman Emperor Augustus and won in 1973 the National Book Award.

The great Augustus only had one daughter: Julia. He manipulated her marriages to gain political stability or to reinforce the position of somebody he wanted as heir to the throne. As a two year old girl Julia became engaged to Augustus’ adversary Marcus Antonius. He however fell madly in love with the Egyptian queen Cleopatra and a few years later had an illustrious death. Eventually Julia was married to her cousin Claudius Marcella. When Augustus wanted to fortify the position of his best friend Marcus Vipsanius Agrippa as heir of the Roman throne, she was then married to this much older Roman general. No love involved.

For centuries the Romans dominated Lesvos and its surroundings. One of the few remnants of this time is the aqueduct, whose greatest remaining part can be admired in Moria. In John Williams’ story, Julia followed Agrippa on one of his journeys across the Orient. In those times it was not ‘done’ for a general to take his wife on his tour of duty, but Julia wanted badly to see more of the exotic regions of the extended Roman Empire. As the wife of the Second Citizen of Rome and as the daughter of the emperor Julia was welcomed on some Greek islands as a goddess and the biggest reception she got was on Lesvos, where she was named after Aphrodite. This made such a big impression, that later on, when her husband had to go and defend the frontiers of the Roman Empire, she chose to wait for him on Lesvos. According to Williams’ story, she got involved in the rituals of a secret cult for women, adoring a highly secret and almighty god. Part of the ritual was a retreat for three days in a shabby hut with a young man.

I have never read about a secret Greek god. The family of the Gods of the Olympus is already large enough. In the book The Cults of Lesvos by Emily Ledyards Shields, the 12 main gods of Lesvos are named, and some smaller ones but no secret ones. It appears that Apollo was the most worshipped god and Artemis the most important goddess. Artemis is now known as the goddess of the hunt, but on Lesvos she used to be the goddess of the thermal baths. There used to be an important Artemis temple in Thermi. Hera also belonged to the 12 most important gods of Lesvos, because of herbeauty contests. However not much remains of a temple nor writings about a cult for Aphrodite are found, although she was the protector of the neighbouring town of Troy. There are a few scientists who think that in Mesa there once was a temple for Aphrodite and another one close to Mytilini. Sappho wrote different poems for this Goddess of love and even named her daughter after her, just as Augustus’ daughter was honoured with her name.

Parts of the book Augustus are fiction, which is also its charm. This way it became a portrait of a normal man with his dilemmas, his sadness and his health problems. Thanks to the fictional correspondences between important Roman people around Augustus, along with parts of diaries (some of them from Julia), Williams created an inspiring image of the time around the man who was worshipped as a god, yet had to ban his beloved daughter because of her lewd behaviour. The case was that Julia, once back in Rome, never forgot Lesvos and continued with an unhinged life, even though she married again after the death of Agrippa, this time to her stepbrother Tiberius. I wonder why Wiliams imagined Julia in Lesvos participating in primitive rituals, far away from the intrigues and bacchanalia in Rome? Did he think that the Greek islands then were not yet civilized?

It is indeed true that even in Roman times heroes or mighty people such as the emperor Augustus were worshipped as real gods and were honoured with festivals. But Lesvos, or Mytilene as it was called in ancient times, was in those times both cultured and wealthy, an island where orators, philosophers and scientists were often best friends with politicians, like Theophanes of Mytilene, who traveled for years with the Roman leader Pompeius the Great. This friendship saved Mytilene from severe punishment, after a war in which the Lesvian city chose to fight against the Romans. During the times of Augustus, Lesbonax, a beloved writer who wrote political discourses and historical documents about the war between Athens and Sparta, lived in Mytilene. His son Potamo was best friends with emperor Tiberius (Julia’s last husband) and was a respected visitor of Rome.

In his book Rom und Mytilini, Conrad Cichorius writes about the relations Lesvos had with the Roman empire and about which Romans lived on the island. The book also contains lots and lots of names of archaeologists and important Romans, which I do not know so well, so I became a bit dizzy reading all of it. This is a book for scientists. But just a casual reading gives a great revelation into how scientists reconstruct ancient history and with a little effort you even can imagine how life was during the Roman Empire on Lesvos. Not bad at all, because plenty of people chose the island as a place to study or to sit out their exile. And if we believe John Williams, also a place to go crazy.