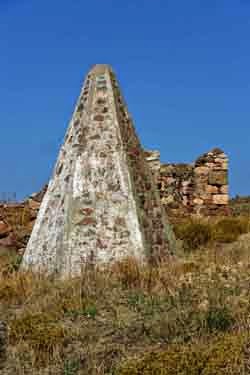 A cold wind and more than a week of leaden grey clouds has made it clear: winter is on its way. The last tourists have all left the island shivering. Some weather prophets predict that the inclement weather forewarns the coldest winter ever in Greece; but that is what they say each year.

The sun took some effort to blow away all those clouds, but she finally managed. Now the sky and the sea are again competing for the best colour blue and the dominating green colour on the land begins to cede more and more to the yellows and the reds: fancy autumn has arrived and when you look out over the sunny landscape you will notice more than one plume of smoke reaching for heaven. That means that people are cleaning their fields and preparing for the olive harvest.

The Greeks were not the inventor of the telephone – an apparatus that nowadays for some people seems to be the extension of an arm – but they had in ancient times other smart ways to communicate. For instance the message of the victory over the Persians at the battle at Marathon in 490 BC was brought to Athens by the running courier Philippides who ran so fast that he dropped death after reporting the message. In his honour the marathon runs were created, a sporting events that is nowadays especially popular.

Somewhat less known, was the system that was used many centuries earlier during the Trojan war (12th or 13th century BC), as described by Homer, Aeschylus and Vergil. In a few hours the Greek victory was reported to the city of Mycene, some 600 kilometres away, using fire signals, a system called fryktories. I can imagine that the Lesvorians had plenty to say about what was going on in Troy: the fire signals line began right opposite Lesvos, starting at the top of the mount Ida (the Kaz Dagi in Turkey) and the signals carried along to mountaintops on Lemnos, Athos, Makistos (now Kandilion on Evvia) towards the mainland and to the mythical city of Mycene (that used to be a little down from Corinth). I am not sure if they were then using the ingenious system of the two towers with five torches, which enabled them to write the whole alphabet.

But it is a fact that fire signals have been used for centuries. The fryktories were the precursors of the lighthouses. They were not only used to help ship navigation but also as a warning system against enemies. The Greek islands especially were for centuries threatened by pirates and on the neighbouring island of Chios there remain plenty of old watchtowers. They must also have been on Lesvos and probably you can find some remnants of such towers in various places.

When last week we were driving around a little and at Nifidia beach, we took an unkown path which seemed to go towards the very end of the Gulf of Kalloni. On a mountaintop I thought I saw a pyramid. It was no optical illusion because when the road reached the coast again there was the very same construction: a six sided massive tower. Further on there were even more. When we looked around we also discovered three other pyramid-like buildings on the other side of the water. What were they? Were they some kind of platform on which to light a fire? The flat top however was not spacious enough for any firewood. And I can imagine that, on a windy day making atop a fire, may cause the surroundings to go up in flames.

Were these constructions part of a warning system against – for example – pirates? This seems to me a bit odd because from the rest of the island you could hardly see them. Or was it a system of beacons for the ships to pass safely through the opening of the Gulf of Kalloni? While most of these towers stood at the seaside, one of them was a bit higher, pressed against a rocky hill, another one stood high on a mountaintop, and one on the other side of the Gulf overlooked the water from high on a ridge. If this was a beacon system for the seafarers it must have been a very clever system for them to safely reach a harbour.

A few local fishermen have confirmed that it was a beacon system. It was very old, so old that the towers are now restored with plenty of cement. Whatever they are, and from whatever period, I am sure that these outstanding pyramids of Lesvos – spread out in the rough landscape of red stones –were a kind a communication system.

During the summer there was some annoyance about the lasers that were nightly sent into the air by the discotheque oXi. I am wondering what is the point of these lights: are the lasers meant to be a beacon in the night for clubbers? It might be an idea to, instead of using these sky piercing polluters, to build some of these pyramid towers along the roads going to the oXi. That would be less of a nuisance and also a nice tribute to history.

The plumes of smoke you can now see everywhere in the Lesvorian landscape, can be interpreted as the message ‘here is work going on’, but of course they are not meant as fire signals. Or maybe there are farmers, who by the means of a smoke column, warn their wives back home that they are soon coming home, so the food must be on the table. This could be the case, because a modern mobile phone does not work in all places on the island, so you have to be inventive. Now just consider what amazing things the ancient Greeks did!