The myths of Moria 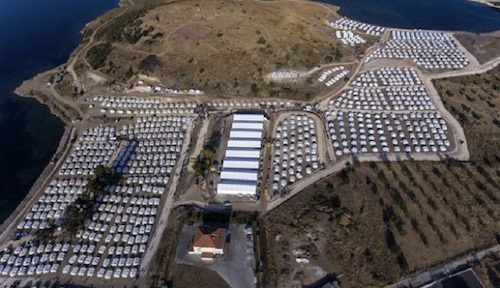 It is not for the first time that a huge camp of tents makes history in the North Aegean. More than thousands of years ago BC, in today’s Turkey, not too far from Lesvos, a camp arose that was probably far larger than camp Moria ever was. For more than ten years it waved its canvasses at the foot of the city of Troy and was a temporary home to kings, warlords, soldiers, servants, prisoners and slaves.

The Trojan war has inspired many to make unforgettable stories, starting with Homer, whose Ilias and Odysseus still make writers imagine new versions of this mythological battle. Euripides, Aeschylus and Sophocles also became reknowned with works about Troy.

They threw the Olympic gods and many Greek heroes into their stories, making this a war of epic proportions. Most of the stories are set in the camp of tents, where the warlords had comfortable accommodation, the foot soldiers and lower orders sleeping under the stars. With all the wounded, prisoners and enslaved women in the camp, it probably had barbarian sides similar to those of Moria.

The dramatic stories, with gods and heroes playing the leading roles, were seen as one of the many Greek myths. But for some years now, scientists agree that in earlier times there raged a real great war around Troy and that Troy once lay blinking on the hill of Hisarlak.

The population of Lesvos would then also have put up barricades: warlords regularly raided the island for food and women. Someone even said that the great hero of Troy, Achilles, abducted seven women from the island, among them Briseis. So it could have been that a Lesvorian lady played a crucial role in the fall of Troy. Euripides and other writers however say that Briseis was a king’s daughter who was captured after her town (Lyrnessus) fell in the battle around Troy. She was so beautiful that she was awarded to Achilles as a trophy of war. Later Achilles and Agamemnon (another important king and warlord sieging Troy) got into a fight over her; Agamemnon leaving with her. At that point Achilles refused to fight any further, and along with him a large portion of the camp would not go to the battlefield without their grand hero. Lots of negotiations were needed to return Briseis to Achilles, who then took up arms again to continue the fight.

The burned camp of Moria is also a rich source of stories. Lots of refugees have heart breaking stories about war and dangerous escapes. Movies have already been made about the story of the teenage Syrian girl Yusra Mardini and her sister Sara who swam kilometers tugging an overpopulated rubber dinghy to the safety of the shore of Lesvos. Or of the Palestinian/Syrian Aeham Ahmad who played piano for four years in the bombed streets of Damascus before he also had to cross oceans to get himself to safety (The piano player of Yarmouk). Documentaries are to be found about the Iraqi cat Kunkush who got lost upon her arrival in Eftalou and was returned many months later to her family in their newfound home in Norway, or about the three Greek grandmothers from Skala Sykaminias, who for months helped newly arrived refugee mothers and their small children and were nominated for a Nobel Prize for peace, and about the costguard captain, Kyriakos Papadopoulos, the Hero of the Aegean, after he rescued hundreds of refugees from the sea in 2015/2016.

There soon will also be stories from the camp. Like that of the five young arsonists, whose, never to be forgiven, action caused the Fall of Moria.

In the meantime, in record time, an already controversial camp, Kara Tepe II, has been built by the Greek army and even though it borders the sea, it bears the nickname ‘The Desert’ because only a few trees are to be seen amidst the too close together tents. Camp Moria now is history and it is up to the writers to distill the myths and its heroes of this infamous camp, as once happened also with the Trojan war.