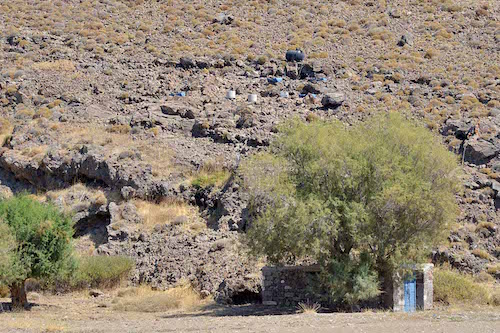 The ninth month of the year still bears the name of the seventh month. An inheritance from Pre-Christian times, when science endlessly struggled with the months and the moon phases. Along with Greek calendars and the one from Romulus that had only ten months, there were twelve-months calendars starting the new year in March. September became officially the ninth month in .45 BC, when the Julian calendar was installed, followed in 1582 by the Gregorian calendar.

September in Greece means saying goodbye to the summer, most of the tourists, figs, walnuts and grapes. It is the month that fog and sea fret stalk the island and make the tamarisks cry thick salt tears. The humidity mellows the salt, which is collected at the tops of the barely recognizable leaves and falls down in fat drops: never park your car under a tamarisk on an early September morning.

These glittering trees of a humid morning – the salty tears in other times, were collected by Greeks to spice a dish – grow mainly along the beaches. They are also called Salt cedars and offer ideal places of shadow, something to battle for in the midst of the summer, but now, in the seventh month (which however became the ninth month) most of them are vacant.

On Lesvos the farewell to the short summer season this year was a bit hasty, now that the corona cases are building up on the island. Only fearless tourists, studying the tables of the worldwide travel virus, will see that Greece (and even Lesvos) are amongst the lowest ranks in Europe. Here there is so much space that a one and a half meter distance is easy to keep. There is so much place that you have a large choice of cool places under the tamarisks (that in fact only cry in the mornings).

It is okay to wear the obligatory mask, some decorated with printed green ferns or pink flamingos. It is the new street scene, once only familiar in Asia, where its inhabitants have for years known what great value they can have. Not the free minded Europeans. They immediately search for conspiracy theories. Just having managed to prohibit face concealing veils in public, and now they make face masks mandatory.

Half of the Greeks are pretty afraid of corona, thinking that it floats everywhere under the large sky, only not in holy places like churches, and especially not on weddings. The other half lives on fantasy theories telling them that this worldwide virus is only used as a scary power tool, that should be ignored and that no mask can protect against it. There are people, even those living far away from corona hotspots, that barely dare to come out of their houses. Others like to embrace you (even though you stretch your elbow towards them for a corona greeting) or keep on having forbidden parties long into the night.

The world again has been divided into believers and non-believers. And even though the death toll declines (in Europe) and many victims are so old that you wonder how they managed to even get so old; the millions of people who survived corona had a big bang and for months after have to deal with health issues like fatigue.

On August first I lived my worst nightmare: a wild fire threatening the house. I think I had an angel on my shoulder that directed the fire brigade just in time into the garden and saved my house. Exactly one month later the worst nightmare of Lesvos became truth: the first corona case in the overcrowded refugee camp Moria. There is a whole flock of angels needed to avert a disaster. In the camps, the average age is low with few seniors, but lots of them are weak and suffer from illnesses or injuries caught during frightening wars. They are the perfect victims for the cruel corona. The raging flames above my home took such crazy directions that the house could be saved. I do hope that corona also will show a surprising side for these people that have nowhere to go, cannot keep a corona-safe distance, are forced to live in the worst possible sanitary conditions and in a place where doctors are as rare as shooting stars.

Let the tamarisks cry for camp Moria, which will soon be surrounded by a Trump-worth fence, making it impossible for people and virus to escape: this September the biggest prison in Europe will arise from the ashes of human values. Europe is in danger of falling back into times of the pre-Christian calendars.

(In the night after publication of this column, camp Moria burnt completely down)