The Magical Empire of Stones 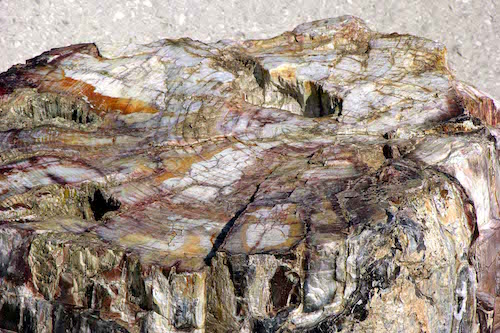 Wherever you are on Lesvos, you’ll be confronted with what the volcanoes long ago spewed high into the air: rocks and stones of all kinds and formations. Whenever you work in the fields, where stones come up like cabbages, whenever you drive along impressive cliffs or lie on the beach with your nose on multicolored pebbles: sooner or later you will get fascinated by the stones.

People have always had a relationship with stones: the first tools were from stone, like the ones they have now found close to Lisvori, one of the archaeological sites on the island. Here they found traces from ancient times when huge hairy mammoths still reigned the world. Later stones were used to build houses and castles.

Stones can also invoke greed: gems, like diamonds, emeralds, topaz, agate to name a few — all that bling that was once only for kings and emperors. Those shiny stones are hidden in rocks, where you may find them accidentally or set up a business to free them from the rocks: mines.

Lesvos has a small history of mining. Apart from mines for copper, gold and silver, there were magnesite mines at Vasilika. Magnesite looks like a colorless mineral polluted by other materials, it’s not exactly the queen of gems. They say Lesvos also is a place to find amethyst, smoky quartz, chrysoprase, chalcedony, agate and jasper. All those are fancy names are for different kinds of quartz and Lesvos has plenty, all begging for someone to go around with a geologists hammer.

Until recently a secret place on the island, has been the crystal mountain, where roads are paved with shiny slivers. Mountain crystal is a transparent quartz, the name deriving from the Greek word kristallos, meaning ice (and quartz). They used to think that crystal was ice that couldn’t melt. Imagine: an ice mountain in the middle of the island!

Crystals are formed when quartz slowly cools in magma. The different colors originate from a mix with other materials, like iron (amethyst), manganese (pink quartz) or through radiation (smoky quartz). Crystal hunters are in the right place on Lesvos, because volcanoes blessed the island with fertile layers of lava and ash. During the eruptions entire woods were buried in cooking hot ash, followed by rains that metamorphosed them in quartz. Petrified trees: another wonder world of the stones on Lesvos.

The west of the island is littered with quartz trees, their interiors colored in unimaginable tints. Elsewhere on the island there is enough radioactivity around hotsprings, (most of them – thanks to strict EU-rules – neglected). They are surrounded by beautiful colored stones, although I have never found smoky quartz ones.

There are people who strongly believe in the healing powers of these stones: they protect against bad moods or stress, they help to communicate and keep your mind and body healthy. Stories have it that Alexander the Great’s many victories came thanks to a belt he always wore, decorated with chrysoprases, stones of victory. After a serpent destroyed the belt, there were no more victories for Alexander and he died not long afterwards.

Lesvos is littered with all these helping powers. Maybe that is why it is called the healing and magic island. Those powers are badly needed these days, because of the new corona world, where it is unsure if there is any place for tourism. But Lesvos has seen worse and is a rich island: it produces high quality olive oil, ouzo and sheep and goat cheese; and has much more opportunities to make a living. In earlier times Lesvos was known for its great wines, an ambrosia still very popular. Tons of seaweed wait on the beaches to be harvested, woods are filled with pines, bubbling with resin, the island is covered by a blanket of plants, badly needed by the pharmaceutical industry and then there are those healing stones.

The coronavirus has put an end to the rampant tourism, that in various places worldwide has become a disturbing plague. Not on Lesvos, where for years now tourism has already decreased because of the refugees. But that has set a new economy: caring for the refugees has produced plenty of new jobs, a fact that should be considered in a positive light. Many a local business remains alive because of these temporary inhabitants.

Of course tourists should return to enjoy the beauty of the island. But Lesvos should concentrate on its biggest gift: the magical empire of stones of the Petrified Forest. That shows how big catastrophes can produce new treasures. That shows how stones were born and rocks were pressed in frivolous forms and nature keeps on moving. That shows how new worlds are born.