The forest under the road 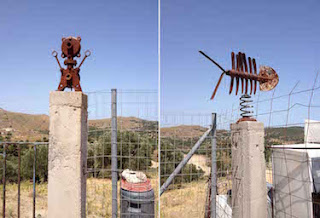 It was at the end of a dark December afternoon, the sun already gone; we drove over a new piece of road, from Vatoussa to Skalochori. It was pitch black and we could not see anything of the surroundings, but we did look forward to each bend the new road took. Nobody knew where the trip would lead us. Suddenly high in the sky a lit building appeared. It looked like a small acropolis surrounded by spotlights. We looked at each other questioning: where were we? How is it that we did not know this highly visible sanctuary? Which village in the west has kept it hidden?

It could only be the little church, sleeping high on the top of a mountain next to Skalochori, now changed into a glorious light object. Maybe they installed these party lights to celebrate the new road, which has reduced the journey between Molyvos and Sigri by at least fifteen minutes. Just as the new piece of road leading from the mountains down to Sigri (the first part that was constructed of this mega ‘New Road’), brings you five minutes sooner into the village. Everywhere you see sections of new tarmac: a lost bridge between Vatoussa and Andissa, a piece of road nearly embracing the road from Filia to Kalloni and another bridge lying neglected in the sheep meadows just outside Dafia.

Everywhere clearcutting and excavators remind you of the making of this road, but it is still difficult to imagine how and where this road is going to be. As it is also unclear for lots of people why in the most sparsely populated part of the island they planned a highway. The traffic in one hour can be counted on one hand.

If we were to give numbers to the thoroughfares on the island, then Kalloni to Mytilini is the A1, Kalloni to Molyvos the A2, Plomari to Larisos (A1) the A3, Polichnitos to Matses (A1) the A4, Loutra toMytilini the A5 and Mandamados to Mytilini the A6. I think Sigri to Kalloni might be B10. The A1 and A3 are already improved. Building goes on at the A4. But why is it that the busy A2 has never had a remake (even though there was money for a circular road around Stipsi [C6]), that is a Greek mystery. As is the megalomaniac project of the B10. Similarly the boulevard of Eftalou, in summer for sure C4, is in such bad condition that shortly buses will no longer be able to pass.

But let’s go back to the B10, Sigri to Kalloni. In the small fishing village of Sigri, kept alive by the beautiful Natural History Museum of the Petrified Forest, there is no sign of new buildings. So when somebody says that this village has to become a port city, I immediately think about the question of the chicken and the egg: is a city growing thanks to a good road leading there, or is a new road made when the city is growing too much? I still believe that the secret plan to cover the wild west of Lesvos with giant windmills is still on the table.

The building of this new road was not totally useless, as proved by the amount of petrified trees discovered when digging out the road. The first section, from Sigri to Andissa, goes straight through Petrified-Tree-Land and during the making the archaeological service was always present and has reaped a big harvest. So much that an interesting exhibition was made of it, shown during the summer of 2015 in the museum in Sigri and it has now crossed the Aegean to Thessaloniki, where The Forest under the Road can be visited until April in the Old Archaeological Museum Geni Tzami.

What the new road has to offer, other than saving time, is unclear. Some people, like the owner of the petrol station just below Vatoussa, will not be happy with this change. Reading the signs in the landscape, the road also will skip Andissa, the village which advertises having the most beautiful village square on the island. Passing above the village, along a hill famous amongst orchid hunters, there is also the junkyard of an artist who makes fabulous sculptures out of scrap metals: from amazing tables to amusing beings waving you a friendly hello as you pass by. All made from screws, bolts, fan blades, drive springs and other various car parts. When the new road actually bypasses Andissa, these laughing robots will be waving useless into the blue sky, because nobody will be stopping anymore to take them. But I guess for the time being we can still enjoy this Junk Art, because the new tarmac extends only a few kilometers a year. Or maybe the ‘real’ goal already has been achieved: that exciting exhibition about what was discovered during the making of a road on Lesvos.