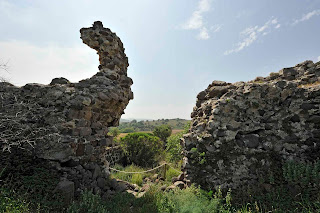 (The remains of a city gate of Old Andissa)

I’m restless, waiting for the next shock: the trembling of the earth, thundering like a heavily loaded truck passing by, the glasses, lamps and paintings shaking furiously – all causing slight panic. For two days the island has been sieged by earthquakes, the three biggest as strong as 5.2 according to the Richter scale.

Greece is the most seismic country in Europe and sixth on the world list. So Lesvos knows the antics of the Earth’s crusts: the North-Anatolia Fault runs close along its northern coast. The tectonic plates grate against each other in order to have a better place to continue slumbering. The fight between the European and Asian plates is now taking place opposite Molyvos in Turkey (not far from the legendary city of Troy that was not only destroyed by warriors, but also by earthquakes). You might even wonder if Erdogan isn’t stimulating the quakes in order to cream off a little of Greece.

Due to these recurring natural disasters, nearly every village or town on Lesvos has been rebuilt one or more times. In 231 BC however the little town of Pyrrha was forever swept off the map, under the gently waves of the Gulf of Kalloni. The waters there are shallow and brackish, so fortune hunters cannot see anything underwater: the town is forever lost.

Also the islet on the coast which was once Andissa was erased, going to a watery grave in 167 BC. Parts of the city walls and some houses kept their heads above the water. With a bit of imagination you can see how this very old Levorian town was. But the ruins of walls and houses are so overgrown that it has became an ideal nest for snakes. There is no way that I will re-enter, through the half preserved gate, this city of ruins, now called Ancient Andissa.

In the 19th century the villages Lisvori, Chidera and Agia Paraskevi were destroyed by three different earthquakes. Only 2 of the 70 to 80 houses of Lisvori remained standing; in Agia Paraskevi 500 inhabitants did not survive, likewise in Chidera only 30. Even though there were so many losses, all villages were restored.

Molyvos has its houses sturdily anchored on the rocks but has also had its share of earthquake misery. One quake after another: in 1865 and in 1867. That last seismic event, with 25 quakes during the night of February 23 to 24, shook the entire island. Mytilini was, for a second time in its history, badly stricken: 2248 houses were completely destroyed (previously in 1383 the whole city of Mytilini was totally destroyed, causing the death of the majority of its citizens, amongst them the ruler Francesco Gateluzi, his wife and children). According to an eyewitness the water in the harbour swirled upwards with lots of foam. Afterwards fishes were found in boats, for days afterwards springs gave only salted water and a meters deep fault was found running from the Bay of Kalloni all the way to Agia Paraskevi. That night 550 people lost their lives, Napi was totally erased and Afalonas burnt to the ground after the shakes.

Even though a 5.2 on the Richter’s scale is categorized as a bad one, I know that the Lesvorians have learned a lesson from history and have built their houses as earthquake proof as possible. But the villagers of Molyvos still do not trust their buildings. When the day before yesterday, a 5.2 occurred in daytime, swift as arrows everyone was out on the street and children were promptly marched out of their classrooms into the school yard.

Now it is raining cats and dogs and a furious Zeus thunders through heaven with flashing arrows. The warmth is over and the temperature is descending rapidly. Ear deafening thundering make doors and windows rattle in their frames. It is like Zeus is joining Gaia (Goddess of the earth) to create havoc on earth. Heaven and earth are angry, yes I do understand. But please, can the tectonic plates stop fighting. There are already enough camps on the island.