The best spot of Samos: Karlóvassi 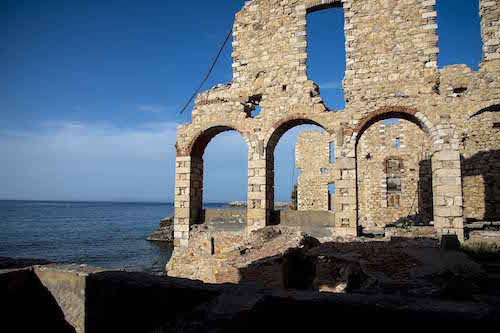 (An old building in Karlóvassi)

For one summer in the Eighties I worked for a travel agency on Samos in Samos Town. I saw little of the beautiful island, because my time between working hours was mainly spent on Gangou Beach, in those days a quiet city beach with only one taverna that had just two music cassettes. The whole day through, only the voices of Alexiou and of Parios (Ena gramma) floated over the blue water of the bay.

In the evening I spent as much time there, but with different music: first in the disco, then at the bouzoukia which was above the disco. In my memories, each night was a party with heart-melting Greek songs, lots of hoppa hoppa and broken dishes.

The floor of the building where I spent so many languorous evenings and where the legs often swept through the air —now a derelict and unsafe building, standing as a sad Greek ruin at the end of the now fully developed Gangou Beach. All the sunbathers who are now relaxing there have no idea what great evenings that dilapidated building once offered.

Why an order to demolish it has not been made, I do not know. Unlike Lesvos, Samos does not have that many ruins, especially not in the capital Vathy. To find them you have to go to Karlóvassi, a place that I hated in the year I worked on the island. It was a place to quickly pass by because it seemed to consist of only huge ruins. Now I walk among them and admire all those crumbling walls of factories that once gave Karlóvassi such a splendid life.

Samos had its first golden century during the reign of terror of Polycrates (540 – 522 BC). The famous mathematician Pythagoras – who had some revolutionary philosophies – had fled from this tyrant to the South of Italy. Having some hundred warships, Polycrates played a role in world politics. He was good friends with the Egyptian pharaoh Amasis who paid him handsomely to defend Egypt. However when Polycrates became friends with the new king of Persia, that flow of money stopped; the Persians occupied the country of pyramids and the armies of Sparta and Corinth attacked Samos. Its huge defence walls stopped them and so Polycrates was able to continue his leadership, but soon after, crazy for money, he walked into a trap of king Oroutos who killed him.

The history of Karlóvassi starts at the beginning of the 17th century, when settlements nestled in the mountains around a large fertile plain, where they grew mainly grapes. At the end of that century, Karlóvssi was the richest town of the island. Just like on Lesvos and in the whole of Europe at the end of the 19th century the grape plague phylloxera ended all viticulture. They then started to grow tobacco and to produce leather. How rich the town became can be deduced from the great mansions that arose, huge churches, various schools and even a horse-driven tram. Further history is a bit similar to that of Lesvos: the union with Greece and the war with Turkey slowed down the flourishing economy. The arrival of hundreds of refugees in the Twenties and the economic crisis in the Thirties brought the industry nearly to a stop and that is how the great Karlóvassi became partly a city of abandoned factories.

The area Ormos with its old industrial buildings is many times bigger than the same like area of Yera on Lesvos. It is pretty lively because of an explosion of building fever. Between the old dilapidated buildings, houses have appeared in all shapes and colours and even hotels have planted themselves in between. For some unknown reason, no building is touching another one. It has a remarkable effect on the ‘boulevard’, stretching along the sea with old glorious buildings along merry newly build houses.

Lots of tourists on Samos are interested in the historical legacy of Polycrates: the temple of Hera, the Tunnel of Eupalinos and the walls of Polycrates. Only a few take interest in the more recent heritage that mainly can be seen in Karlóvassi. From a period when commercial vessels occupied the harbour, factories blew great steam clouds into the air and families in large mansions dominated daily life.

Todays Karlóvassi is partly populated by students that give the town a lively fresh air. The town hasn’t erased the past, but with a bit of anarchism included it in its new structure. That anarchism seems to have seeped in from the surrounding mountains where a lush jungle-like carpet of plants, bushes and trees is growing. Between these amazing dense woods, in between vineyards, many churches hide, amongst them one in a cave like a cathedral. The ruins of a Venetian castle dominate a hill not far from refreshing waterfalls and some villages built high in the mountainsare a places of interest because of their superb views. Now that there is no more bouzoukia at Gangou Beach, I think Karlóvassi is the Hot Spot of Samos.