The ant and the cricket 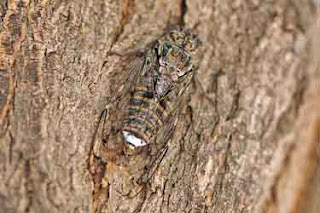 During Greek summers sometimes it is hard to make conversation or read in silence. And it is not screaming children at the beach, nor the boom-boom sound of a disco, nor bleating donkeys that make concentration difficult. The higher the temperature, the more this creature is doing its utmost best to tear your eardrums: crickets are the biggest plug-ugly nuisances during the hot days.

It is incredible what hard noises these chirping insects can produce, sometimes well over 100 decibel. The scientific name of this phenomenal is stridulation, a word that makes me think of a violin, although crickets do not sound at all like a string orchestra, more like a staggering motor. The sound is produced by the wings that scrape over each other’s comb-like edges, a bit like a musical saw, so a cricket indeed is a kind of string instrument.

I reread the fable of The ant and the cricket written by La Fontaine. In the summer the ant works hard for its winter stock, while the cricket sings its best songs. When the winter arrives the ant is prepared and the cricket has to visit the ant and ask for help, which is refused by the ant.

I see the fable performed in front of me. The male crickets talk the loudest, while hiding in trees (sometimes in your living room) and flirting with the poor females who cannot answer their calls (only the males can stridulate). The ants, ready for months, are busy cleaning, dragging objects sometimes twice as big as themselves, building nests and I do not know what else they do, but they are always working.

Since spring they have occupied my house. Although they are very tiny, barely visible, their presence is obvious. It is an uneven battle: I really do everything that I can to keep the house as clean as possible, especially in the kitchen where you cannot drop one crumb or an army of ants rushes to the spot of the offense to take away the mess. I really cannot keep up with their speed of cleaning, and certainly not at all during the hot days that have put the country in slow motion during the last few weeks. I now even see bigger ants, also trying to invade the house. You have no idea how many ants I already killed this summer.

The good news is that this summer the ants came concurrently with the hornets. I am not really happy about their arrival: they are among the biggest wasps of Europe and their red colour is pretty intimidating. But after some years of barely being seen, this threatened insect seems to be back again, which is good for the environment. So where the ants have spotted a nice delicacy, the hornets also rush to the spot to eat it. Long live the revolution!

This year the Greek ants – I assume that they have not travelled from Turkey with the refugees – are particularly busy. Do they foresee a long and cold winter? Or do they collect for charity? Nowadays there is a difficult choice to make when making a donation: for the refugees or for the Greeks who, especially in the cities, can barely survive.

The Greeks – just like the crickets – love to sing, especially in the summer. But now that the Greek economy is in bad weather, arrogant Europe refuses to help them (and the refugees) like a haughty ant. The Greeks have stopped singing: there is no money left to go out to the tavernas where they used to sing their popular songs of love and life, a once so great Greek tradition.

The coming winter is going to be very difficult. Although most of them will be deep in the shit, I am sure they will take up singing and dancing, if only to keep warm, just as the ant advised the cricket.