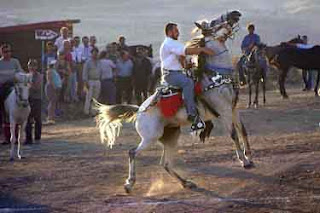 Why do you see so many horses on Lesvos? You see them everywhere, pottering about in little fields; but seeing horse riding is far more rare. The time that they are let out of their normal meadow habitat is during the panayeri’s, small local festivals.

In ancient Greece horses were mainly associated with the Gods. The rulers of the heavens (and earth), like Poseidon, used them to pull their chariots but they were also used as a reward for mortals. In ancient times riding horses was only for the Gods, royal children or famous warriors.

It is said that the Greeks were one of the first peoples who rode horses into war. Not only could horses pull heavy war equipment to the arenas, it was also soon understood that sitting on a horse on the battlefield made you faster than the infantry. Achilles went to the war against Troy with two horses who spoke: Xanthus and Balius. Bucephalus, the legendary horse of Alexander the Great, had a city named after him when he died.

A horse in Greece was a sign of wealth. I understand that very well, because keeping such an animal costs a lot of money. But what is the use of a horse nowadays? The horse owners that I know on this island own more than one horse. They are mostly poor people who have to struggle to earn a living. When you ask them why they keep horses the answer is simple: “ I’m crazy about horses.” And what do they do with them? Well, one or two times a year, they show off the animals at festivals.

These poor show horses will be kept at leisure during the year and then some days before the panayeri will have a crash course in order to build up their condition and then they are beautifully dressed-up and then thrown in the midst of the partycrowds.

Most of the panayeris take place in the summer months and nearly all the villages on Lesvos have one; so mostly any weekend you can find one. The best known is the Party of the Bull in Agia Paraskevi, where a bull is sacrified and where it is said that the horses get served ouzo, in order to come in the right mood to celebrate. Also Molyvos has a fancy decorated bull marching in front of its annual parade, but this one goes safely home at the end of the party. Although in Molyvos at least one animal gets to be killed, because, just like in Agia Paraskev, at night big kettles are put on fires in order to cook meat, wheat and herbs for the so-called Kiskeki, that is served to everyone who participated in the festivities. I once tasted this gunk, but like many other traditional Greek festivity dishes (like the majeritsa, a fresh soup made of offal during Easter night), it is hard to swallow.

Goats provide milk and meat, sheep are also eaten (sheep used to be kept for the wool but not anymore, since cheap wool now comes from even poorer countries), chicken lay eggs and also may end up on a plate. But what use is there for a horse? In Greece no horsemeat (nor donkey meat) is eaten. Do you somehow feel royal when you own a horse that you can barely look after and that is just left to meander around in the fields? There are some people who have given up their horses and set them free. Somewhere high in the hills above Mandamados there is a herd of wild horses, totally free and looking for the Horse Heaven.

Lesvos is rich with organisations that aim to better the lives of poor dogs and cats. They for example save chained dogs, which are kept by the farmers in order to keep away foxes from their sheep. I am wondering why there is still is no organisation that will protect the wellbeing of all those horses that are only used during the panayeri’s. During the rest of the year I regularly see them, stashed-away with legs shackled, all on their own. Is that a dignified horse life?