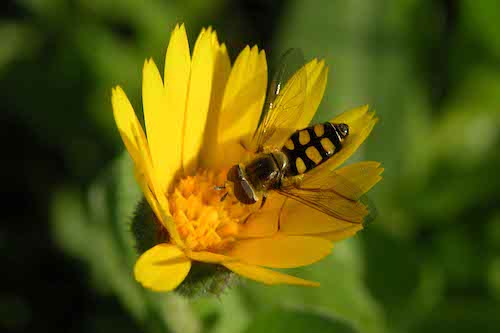 Along with olive oil and goat cheeses, Lesvos has a lot to offer: like honey. When enquiring about the best honey, you will find suggestions for many sources. It seems every village has its own beekeeper and no matter to which local seller you go to buy, the honey tastes like food for the gods.

Somewhere I read that the most important nectar provider on Lesvos is Monk’s pepper (Vitex agnus-castus). Combined with other flowers it will give spring and summer honey of sweet wild flower nectar. There are however more flavours: winter honey from honeydew, tingling thyme honey, lighthearted heather honey and a special, somewhat bitter, chestnut honey. I have been surprised by a jar of oak honey: raw and not too sweet, and a jar of honey from the strawberry tree (Arbutus unedo), its bitter flavour is outstanding. I hesitated to taste it. I just hoped that the beekeeper had not kept his hives close to the yellow rhododendrons, (strawberry trees growing in close proximity). Honey from those sweet scented flowers is poisonous. In about 400 BC the army of Xenophone ate yellow rhododendron honey near Trebizond. They were lucky their enemies were not around when they lay puking and half dead in the bushes — otherwise they never would not have lived continue their travel a few days later.

About 110 beekeepers from all around the island are united in the cooperative of beekeepers, with some 10,000  beehives (Lesvos honey). But there are also some who operate independently, like the honey hut from Pavlis, just outside Kalloni, Anthonis Georgiou in Sigri and Melostagma in Skalochori. Lots of bees are needed, because for one teaspoon of honey 12 bees have to work an entire life!

Everywhere in Greece you can feast upon local honey. Thanks to the huge variety of flowers and trees the land of the gods might even produce the best honey in the world. It has, in any case, the most beehives per acre in Europe and is considered as the country where beekeeping started.

The very first honey bee was Melissa, who started life as a small round nymph with very small wings. When Zeus married Hera, plenty of presents were given and Melissa brought a simple saucer with honey. Zeus and Hera had never tasted such delicious food and asked Melissa if she had a wish. Melissa had problems with animals who stole her honey, so she asked for a weapon to protect her production. Zeus went mad because she had asked for something that could cause violence, a great offense on a wedding. He gave a colony of bees and Melissa had to to be their queen and then, as a weapon, suddenly a sting grew from her belly, and whenever she would sting somebody, she would die. And so it came to be that the lady bees have a sting that results in hara-kiri when they sting somebody.

Greeks used to believe that honey came dripping from heaven. The bees collected this. Sometimes the bees were sent to let fall some drops on the lips of sleeping people, thereafter those mouths would produce wonderful stories, songs and poems. That is at least what Pausanias wrote about the musician Pindar. But also poets like Homer and Sappho are said to have been kissed by a bee with honey on their lips.

It’s no wonder that the honey drink, nectar, was the favorite tiple of the Olympian gods. Now we know better: bees collect nectar of flowers. Or they collect a juice left by hemipteran insects, like aphids. These tiny creatures have loud parties getting drunk on plants’ juice. The sugars they cannot digest are transformed into a sweet secretion: honeydew (ick, that sounds a bit like aphid piss). It is the nectar and aphid piss that are changed into honey in the beehives.

Then honey is put into jars and for example used to make baklava (filo pastry with nuts and honey), loukoumades (small fried puffs swimming in a honey sirup) or especially for Christmas melomakarones (sweet spiced honey cookies). It is also used as a base for various beauty creams, such as the products of Apis Frabricca (Mandamados).

When I put my honey-nightcream on, partly produced by aphids, I have to have a think about those nasty small animals, whose main aim is to destroy my roses. That they cooperate in making a food for the gods makes them a little less a nuisance in my eyes. Though that will not be sufficient reason to stop killing them this coming summer.