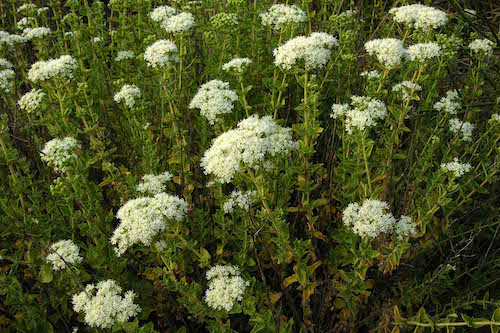 Have you ever tried to sit in a suitcase? Last week port officers opened the suitcase of a traveller boarding the ferry to Athens and in it they found an illegal refugee. It was not the first time that they have come across this desperate manner of smuggling.

On Lesvos there are people smugglers, in the North of Greece, in the mountains close to the Albanian border, the police has to deal with other smugglers: Albanians who sneak over the border to steal tons of, often very rare, mountain herbs. They set up hidden camps from where the pickers swarm over the slopes to gather their loot, using faithful donkeys to transport their loot back over the border to their own country where they can sell in all freedom the herbs for good prices.

Tea and a rare species of sage are high on their wanted list, but most favoured is cowslip (Primula vera) whose dried flowers and roots can be sold for more than 20 euro per 120 gram, or they may ask 34 euro per 25 plants. This way these smugglers earn in one month what they normally earn in a whole year.

If they did the picking in a professional way, or left an address card behind in order to share the profit, Greece may not have taken such extreme measures. But these smuggler gangs uproot plants in such a hurry, that they destroy whole fields and thus threaten the future growth of the plants. Plenty of donkey caravans with illegal herbs are catched on the smuggler routes.

Lesvos does not have that problem: no primula vera grows on the island and it does not border Albania. Even if the Turks were to get the idea to come and steal herbs on Lesvos, no bags with thyme would reach the other side because thanks to the people smugglers the island is very well guarded. And besides, Turkey itself is a Valhalla for herbs, where you can, without danger of getting arrested, amongst others uproot orchids, something which is forbidden in Greece (and in the whole of Europe).

Lesvos is rich with wild oregano, thyme and sage, that is harvested by the locals in pretty modest quantities. They may even not know yet the new Greek law from 2014, saying that you are only allowed to pick herbs for your own usage: ½ kilo a person, per day. They just do not realize that it’s money growing in their fields. Maybe it is better this way, otherwise they would loot the mountain slopes like the goats eat all the greenery.

On internet I have only found two companies specialized in herbs (and olive oil and salt) from Lesvos: Melima products and Nissos (Greek food). I take it that they have a permit and do the harvest in a professional way.

Rock Roses (Cistus creticus) are wanted by the pharmaceutical industry because of its etherial oil. A north Aegean firm has now made a deal with a big company to deliver 800 kilo of Rock Rose from Lesvos. I wonder if they also have a new way of harvesting, because these flowers are not the easiest to be picked: in the heat of the day, when the flower petals sweat that fragrant oil. Or will they use the old method: chasing goats through the Rock Rosebushes, and afterwards picking the oil from their coats.

Now while tourism on Lesvos is still very slow – people may still be afraid of little boats with refugees landing on the beach – it may be time for some people on Lesvos to think again what business they open. The island is not only a paradise for tourists but also offers plenty of opportunity for herb picking (wanted by the pharmaceutical and cosmetic industry) or seaweed cultivation (food of the future). With a bit of vision you could do better than opening the umpteenth restaurant or hotel for tourists who are staying away.

Last week I saw an, unknown to me, man dragging an enormous bag full of oregano on his back. Under the large load he made himself as little as possible. For sure there was more than half a kilo on his back and no donkey or car to be seen: it must have be hidden somewhere in the bushes. Was that an Albanian who crossed the border illegally and took the ferry to Lesvos in order to get some of that first class oregano of this island? If he is not caught along with the stowaways going back by ferry, there might be a truck waiting for him in Kavala that will bring him back to his country, not over the smaller smuggler routes but just over the highway: the new smugglers’ way. It is good that there is no primula vera on Lesvos, otherwise we might also become a smugglers’ island and then tourists might be frightened away totally!