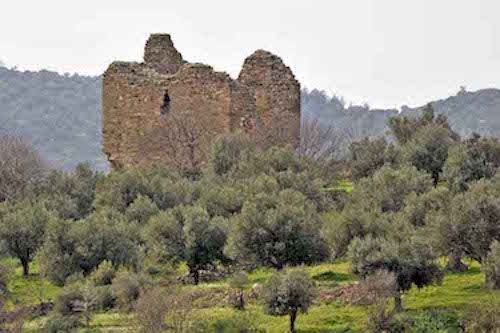 I have to admit that I’ve never wandered around in the village of Vrissa, meaning that I’ve only passed through the village a hundreds of times whilst going to and from Vatera. Each time its traditional silhouette beckoned to come and discover its quiet, colourful streets, I always decided: later. Now that the earth has moved and the stones of the houses have shaken loose, it is too late. Vrissa will never again be that innocent, beautiful traditional little village.

In the Seventies the same thing happened to the village of Chalikas, at the feet of Lepetimnos. There the earthquakes triggered landslides which made the village uninhabitable. The residents were evacuated and never returned. I hope that Vrissa will not become such a ghost town and that it can be rebuilt, although I wonder if the villagers want that.

Vrissa is kind of a nomad village, having moved from one place to another place throughout its history. Once its houses stood at Cape Fokas, later the people flourished at the banks of the Almyra river, from where it moved to its actual place. The cause of the village relocating from one place to another can be easily guessed. The temple of Dionysos that once attracted people to Cape Fokas, and now left with just one pillar gesturing to the sky, was completely destroyed by natural disasters, or was it war?

Vrissa was surrounded by stone factories, where they transformed mined ignimbrite into bricks. Most houses of Vrissa were built with these stones. On Lesvos you will see various local styles, like that of Pterounda where special nice crafted bricks can be seen in some of the walls of the houses and it was explained to me that they were fabricated locally. Lesvos with its volcanic history has plenty of building materials, although I wonder how steady they are. According to Wikipedia: “Ignimbrites are made of a very poorly sorted mixture of volcanic ash (or tuff when lithified) and pumicelapilli, commonly with scattered lithic fragments.”

Even before the earthquakes the walls and roofs of these factories were in a poor state, so I guess it was a long time ago that their chimneys blew smoke into the air. I wonder if these Vrissian icons are still standing, or have they met the same fate as the village, falling into pieces, and finally finding a place in dusty history books.

Not far from the village is the Paleopirgos, a watchtower built by the Gattelusi family that reigned the island for about a century from 1355 on. From pirate roots, the Gattelusi became kings and they fortified the castles of Molyvos and Mytilini and built several watchtowers in order to defend themselves against other pirates. Who knows how far into the land Vrissa was then, because in those times nobody without fortification walls and castles dared to live close to the coast risking being slaughtered by those sea bullies. Will you still see this impressive tower from the road passing from Vrissa to Vatera?

The most known attraction of the village was situated in the old school: the Natural History Museum. There is not much left of this eccentric and interesting museum. It housed the bones of prehistoric animals found in the area and that of Gavathas. They have already survived so many earthquakes that I do not fear for their well being; but I do for that of the plant fossils and animal skeletons and other things in the display cabinets and, of course, the building itself, now scattered into millions of pieces. The bones can be dug up again.

Also all street dogs have mysteriously disappeared from the village. Apart from two. Street dog Liza used to hang around the museum and will not move from its shattered remains. Instead of by visitors, she now is patted by the rescue people and those that have started cleaning the village. The only caretaker of the museum keeps on feeding her. The other dog that did not want to leave the shattered village was the dog of the one person that was killed by the earthquake (a mother of 43). He dug into the debris looking for her and once she was found he did not want to move and could only cry. They had to remove him to an animal shelter.

Lesvos has many traditional villages like Vrissa, each one with its own history, all marked by time and every one is an important historical monument. Now there is one pearl less on the island. It is a pity that it was the eldest houses, those telling most of the stories, that were the first victims of the earthquakes. Lots of houses, churches and other buildings in Plomari, Polichnitos, Lisvori, Akrasi and other villages have been severely damaged. And so time is devouring another piece of history.