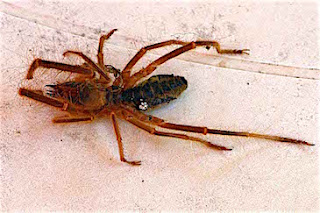 Summer can be lovely but it also has its dark sides, sometimes even creepy sides, like scary insects and other small creepy-crawlies. My biggest nightmare is the Camel spider (Solifugae). You won’t come across him daily, but yesterday I found a dead one lying outside my front door and I went nuts: where did this moron came from?

Two summers ago I saw at least five of those creepy spiders, one of them climbing on my screen door, probably looking for a tiny hole to break into the house. Imagine if such a monster were to succeed in hiding behind your computer, or to crawl under a cushion on the couch just to watch tv, or if it were to take a nap under your sheets. The very thought of any of these things makes me panic, just as I was so horrified when I saw one of these creeps hanging onto my screen door. I rushed to the bathroom, took whatever spray I could grab hold of and sprayed the monster dead. A friend had to save me from the (dead) spider, and finding the camel spider so interesting, he decided to keep it and put it in a glass box where it remained until now (the hairspray having done such a good job of preserving it).

As far as I know, in Greece camel spiders do not get any bigger than 10 to 15 cm. In Afghanistan and other desert-like countries – where these spiders belong – stories go that the wind scorpions (another name for them) can be double that size and can easily dig a huge hole in the belly of a camel. Scientists defend them saying that they are not poisonous, even though the bite of this monster hurts enormously. I will make a detour of any size in order not to meet such a sun spider (this creep with eight legs, that officially even isn’t a spider, has lots of names). If you have seen one, more will follow, so I will be more on guard this summer.

I am not afraid of the jumping grasshoppers. As long as they do not land on my arms or, for sure, on my nose. But they are catastrophically gluttonous. Two weeks ago, on the neighbouring island of Ai Stratis, a state of emergency was declared because of a grasshopper plague of biblical dimension. I am wondering if they might come to Lesvos, once they have completely stripped that little island. The very first colourful messengers – already quite an army – have landed in my strawberry plants, and eaten the leaves and tasted the fruit. Some of them, having had enough of the strawberries, have jumped onto my roses, even though there they have competition from lice, beetles and mildew.

There are also entire armies of mini ants, making the kitchen and the pantry into battle fields. These don’t scare me too much, but they too can constitute another huge plague. I make enormous efforts not to drop a single crumb for them and seal away all the sweets. The popular jar with honey in it I put in a bowl with water, hoping to save it from the ants. But this lovely sweet-water pond is now used for swimming lessons: and the most successful ants have reached the jar of honey. So now I have to create an enormous wavy ocean around it, if I do not want to share the honey with these nasty rascals.

Then I got ‘royalty’ visiting me. For years now, a gigantic wasp, a Hornet-Queen, has succeeded in penetrating my house and even though I throw her out as an unwanted guest, early each summer she tries exactly three times to come for a coffee. Maybe she is less scary than she looks; but, like the sword of Damocles, she hangs from the ceiling right above my head, screeching loudly as if she was on a soap box in Speakers’ Corner, making it impossible or me to work. But I refuse to let her chase me out of my house. From a decent distance I spend long hours waiting for her to come down from the ceiling, so that I can catch her with a glass and a whisk and remove her from the house. In a way I should be honoured with this regal visit, because it’s impossible that each year it is the same queen (that would make her over ten years old!). I wonder if I am part of the traditions around the coronation celebrations: she may only be crowned if she invades my house three times and get thrown out three times without damage.

I am pretty tired of it all: scared because of the camel spider, sad because of my sick roses, desperate because of not knowing how to stop the grasshoppers eating my garden, tired of my fights against the armies of ants and having to be constantly alert for a secret fourth mission by the Queen. But before you know it, I will be relaxed again: gone will be all offenders, but then too the summer will be gone.