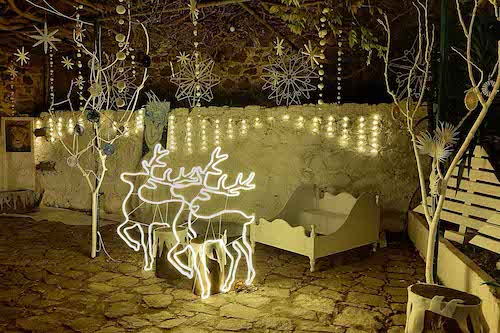 The autumn was unusually warm and the serious rains only came to us very late. Due to the long drought only a few mushrooms have dared to lift their heads from the earth. My house carried on as an ideal hunting grounds for mosquitos. When the earth finally became soaked, the grass broke all records in how fast it grew and within a few days the island was again coloured a young winter-green. It was close that a battle broke out between some ‘Christmas’ mosquitos and the kallikantzari’s (Greek-Christmas-Bullying-Gnomes). Just in time, the temperature dropped to a winter norm and hidden deeply under a mountain of blankets, I no longer hear any mosquitos.

There have been Decembers when the first spring flowers will have already unfolded their petals. But as everything is so late this year, I was surprised to see some daffodils desperately trying to fatten up their bulbs, just to be open for Christmas. And the Winter Clematis (Clematis cirrhosa) is working hard to open up for the holidays. They ‘must’ because this beautiful climbing shrub also bears the name Jingle Bells. I just call her Christmas Bells.

At Easter the Greeks cannot get enough of the chimes, but around Christmas the papas (priest) prefers to stay warm and cozy next to their stoves. I wonder if there even is a Midnight Mass. Or is that only a tradition in catholic and protestant churches? Bells are not a symbol of Christmas in Greece. There are no ship bells on those traditionally decorated boats that light the country in December. Also the children, who pass from door to door singing Greek Christmas songs only accompany their songs with the tinkling of a triangle. Although there exists a Greek version of the classic American Christmas song Jingle Bells: Trigona Kalanta. (Kalandas are traditional songs performed during the Christmas Days, New Year and Epiphany).

Sleighs pulled by horses barely make sounds and that is why, centuries ago, for safety purposes the horses were decorated with little bells: jingle bells or sleigh bells. In America the song Jingle Bells became popular around 1860. It was originally published some year’s previous as a song for Thanksgiving with the title One Horse Open Sleigh. The song tells of the fun to be had getting your girlfriend on a sleigh and dashing through the snow, while the little bells jingle. Because of the snow and the lovely jingles, it became one of the most known Christmas songs in the world. It was also the first song broadcast from outerspace. The astronauts Tom Stafford and Wally Schirra sang this song, accompanied by a small harmonica and some jingle bells, in December 1965, when the meeting of Gemini 6A and Gemini 7 took place in space.

It is now well known that Saint Nicolas together with lots of emigrants made it all the way to America centuries ago. In American children’s books it was said that Santa drove over the roofs of New York, in order to throw the presents down the chimneys. Santa Claus was driven in a sleigh, pulled by a horse. Then in 1820 a story was told that the sleigh was pulled by a reindeer (those animals living in the far and mystical North); this became the more popular version and eventually Santa Claus travelled in a sleigh pulled by eight reindeer. Later Rudolph joined the group, and he too became another Christmas legend. Another children’s story tells about Santa Claus getting lost with his reindeer on a very foggy night. Rudolph saved Santa Claus thanks to his red nose (so shiny that it nearly lit up). That is how he became the ninth reindeer. Of course you can hear the sleigh coming by the jingle of the bells.

Lots of classic Christmas songs have their origin in American stories and poems for children. Slowly this colourful culture has penetrated Greece, where the tradition of a Christmas tree started with King Otto of Bayern. Now cities and villages like Molyvos and Petra are brightly decorated with Nativity Scenes, Christmas Trees, illuminated boats, snowmen, Santa Claus, sleighs and reindeer. A fine mixture of Christmas cultures. But no bells to be seen. They only can be heard in the American Christmas songs that blare more and more through the Greek streets.