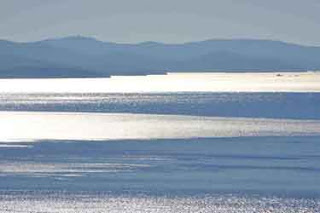 Now that spirits are somewhat cooled down after the negotiations with Europe, there is something else to keep you from your sleep: a heat wave! By definition: a period of days where temperatures are far above normal. Each country or region has its own precise understanding, for instance, in Holland there must be five consecutive days of temperatures above 25 ˚C with at least three days above 30 ˚C. The definition of a Greek heat wave (kafsonas) is three consecutive days with temperatures above 39 ˚C.

It’s so warm now that even some of the refugees arriving today plunged into the sea to cool off. I am glad that Medecins sans Frontiers have now organized regular busses that pick up the refugees in the north of Lesvos, to take them to Mytilini. It would have been a shame if, just like all those thousands of people who in past weeks had to walk to the capital, they now had to do the same in these inhuman temperatures.

So what is to be done during a heat wave? Well, keep your head cool, of course. The best way to survive the hottest parts of a day is to relax inside a cool and dark home or in deep shade outside. Or, even better, to pack up your things and go to the beach, to the blue, babbling sea.

Lesvos is surrounded by the Aegean Sea, a water of some 214,000 square kilometers, stretching between Turkey and Greece. In the north it is connected with the Sea of Marmara and the Black Sea and in the south it merges into the Mediterranean Sea. Three big river deltas supply water to the Aegean Sea: that of the Evros, the Nestor and the Strymonas. If you follow those rivers upstream – and the many others that drain into them – you will arrive in Bulgaria. One part of the Evros forms the frontier between Turkey and Greece and the delta of the Strymonas is partly in the Republic of Macedonia (see: Drainage basin of the Mediterranean Sea).

So when you dive into the Aegean to keep cool during a heat wave, you are throwing yourself into international waters, because the water of the Mediterranean circulates in the Aegean Sea. The French Rhone (that smuggles water from the Lake of Geneva) and the Italian Po (that comes from the Swiss Alps, and is also fed with water from the Lakes of Lugano and Maggiori) come out into the Mediterranean Sea. Additionally the Isonzo, Krka, Neretva, Drin, Vijose and Vardar find their way from the middle of Europe to the blue sea, feeding themselves with water from all the lakes they encounter. It is a funny idea to swim in a soup of all those famous rivers and lakes, all of which, I am sure, are popular during a heat wave.

A lot of swimming goes on in the Aegean Sea. When you put on a snorkel and nose about looking for what is going on underwater, you will still come across plenty of fish (although fewer than there used to be because of over-fishing). I will not mention what fish are common, that would be too long a list (but many of them will be served to you in the Greek taverns); and they all share the sea with octopus, squids, dolphins and other sea animals. Even seals are part of this population, although nobody knows exactly how many remain. In wintertime I sometimes spot a seal who, with his round head dives in and out the water, showing his beautiful moustache for a few seconds and then disappearing under the water without a trace.

There are also people who believe that there are even more creatures roaming the seas: mermaids. According to some myths, the fist mermaid was spotted in Syria. About 3,000 years ago one of the most important goddesses of Syria was Atargatis. In her charge was the fertility of the earth and of the seas. Just like a dove, a fish for her was sacred. One day she madly fell in love with a shepherd, by whom she became pregnant. The shepherd however did not survive the divine lovemaking. Atargatis became inconsolable and after she gave birth to a baby girl, in desperation, she threw herself into a lake. However she could not die, and half of her body was changed into that of a fish. Her daughter Semiramis became Queen of Syria and in memory of her mother she forbade the eating of fish. Except for at the coast, fish eating is still not popular in Syria.

Lesvos has a mermaid-village that was built in 1922, when refugees sought shelter on Lesvos: Skala Sykaminia. The little church of the Gorgóna (mermaid) Madonna still glitters on a white rock at its picturesque harbour. The story is that once there lived a captain, who one day disappeared, leaving behind a mural of Maria with a fish tail. The next day the refugees arrived. The village and its gorgóna became famous thanks to the novel of Stratis Myrivilis: The mermaid Madonna. It is the story of an extremely beautiful girl, who according to some old villagers, was born to a mermaid.

Some of the dinghies that are bringing the refugees to Lesvos nowadays, reach the coast not far from Skala Sykaminia where I hope the Mermaid Madonna will bless all those people who have lost their homes and countries.

There are endless such myths about the Aegean. Heroes like Odysseus got lost there for years, the flying Icarus lost his life in the sea, people threw themselves into its waters because they had broken hearts (Alcyone and Sappho), and the Aegean waves once transported the head of Orpheus and its lyre to a Lesvorian beach.

The sea is full of stories and when you listen carefully, those stories will take you across the frontiers of Greece, deep into Europe, but also to the other side, for example to Syria (not a good place at the moment to get nice stories). Syria also borders on the Mediterranean, but I am afraid that its waters do not provide cooling against the war, rather only an escape route to safer places.