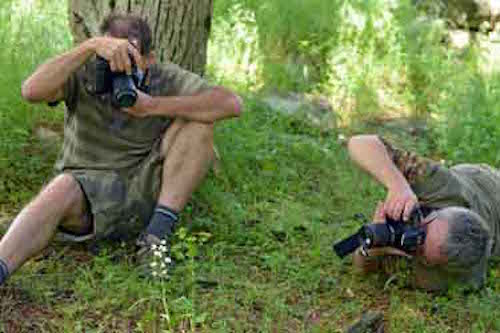 Persephone, the goddess who lives half the year underground with her husband Hades and the other half with her mother Demeter on earth, is seen as a spring goddess. When she returns to her mother, who is the goddess of fertility and growth, Demeter becomes so happy that she makes everything on earth grow. Just like this spring, although I think that Demeter must allow some things to grow in winter too because in the dark months we still have plenty of wild vegetables, citrus fruit and mushrooms.

There are people who were concerned about how little rain fell last winter, a time that I remember with blue skies and very pleasant temperatures. But when the real spring arrived and Persephone came from Hades and saw the dry earth, she might have made a plan with her mother to seduce the gods of the weather to bring a little bit of winter weather. Well, temperatures did not drop quite as low as in winter, but for weeks the weather gods have played a game where masses of clouds, heavy rainfall and deafening thunderstorms race through the Greek skies and the earth gets soaked with the water from heaven. The sun has taken up the challenge and tries desperately to win back ground. The result is a muggy atmosphere, like in a subtropical climate, and it is the plants that take profit and shoot out in record-breaking time. If you have not been visiting your little piece of land for a few days, you risk not recognizing it because of the vegetation reaching up to heaven. Even the asparagus have not stopped growing; thanks to the last rains they have started afresh with new shoots.

I don’t know if the birds are also profitting from this subtropical weather. But with the first charter planes, lots of birdwatchers have arrived on the island and taken their positions at strategic places with cars, huge tripods and cameras as big as cannons. If you pass such a gathering of people along the road or if the road is blocked by people wearing all kind of electric devices, this will be the birdwatchers waiting patiently for the one bird they have yet to spot.

However this spring there are also other gatherings of people: the flowerwatchers, including a large number of orchid hunters, who normally travel individually, but now seem to gather more and more in order to shoot pictures of as many orchids as possible. Lesvos was already known as a paradise for birdwatchers, it’s now becoming famous as a paradise for orchids.

For example when you visit the Chestnut wood above Agiasos and you want to quietly admire the view of a Comperia (Himantoglossum comperianum), it may happen that suddenly ten little rented cars stop and out pops a mass of people that kindly pushes you away in order to be able to photograph this miraculous orchid. These gangs of people are not yet trained to behave in groups like birdwatchers and there is a big risk that rare and beautiful orchids, that are difficult to spot amongst all the other greenery, will be trampled by so many sturdy walking boots. Although I must admit that the orchids are not small flowers anymore; they have never been bigger than this spring, and you might think that Demeter mixed the rainwater with some nuclear waste in order to get such huge plants. In America, when a fish with more than a normal size is discovered, they blame this on the 2011 leaks of the Fukushima nuclear plant (Japan) after the tsunami; though scientists deny that nuclear waste can transform fishes into monsters of big sizes. But I bet that Greece (and all other countries around the Mediterranean sea) will be in for terrible surprises once the Syrian chemical waste gets destroyed in the middle of the Mediterranean sea and the fish get feed by the waste waters that has been absorbing chemicals such as sulphur, mustard gas and sarin gas. Will we be finding gigantic octopus or other huge sea monsters in the sea next year, or will all fish slowly die (O, sorry experiment destroying chemical weapons has failed!)?

I suppose orchids will not easily change into monsters, but who knows what influences make them change their habitat. It seems that orchids growing in the warm south are marching northwards. And this spring orchids are spotted here on Lesvos that have been hidden for almost twenty years. For some people looking for orchids is not just about finding different kinds but also to study their habitat, the hybrids and mutations.

This year we will blame the sub-tropical weather for the explosive growth of the greenery and the outburst of big flowers. Persephone and Demeter did a great job. I must admit that Greek Gods are not always so nice — for instance the Weather Gods, who can spoil many a holiday. But at least they keep the world turning. The question is if they can continue doing this, now that chemical and nuclear waste is spread all over the seas of Poseidon and over the earth of Demeter.