About volcano’s and swimming stones 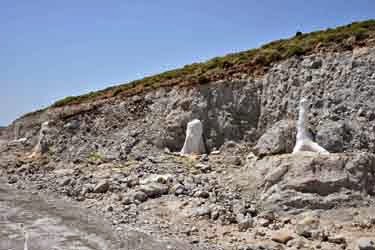 Have you ever noticed the great number of stones on a Greek island? Just like the Lesvorian landscape, that proudly shines with its stones and rock formations. It was millions of years ago that volcanic forces ravaged and reshaped the island, so that now we can admire whimsical rock formations – like the mountainsides built-up of columns (columnar lava), horizontal stone plates that seem to be on the brink of falling down, or enormous rocks which were catapulted by the force of the eruptions and now lie scattered around, just waiting to be made into a Lesvorian Stonehenge Centre.

The monastery of Ypsilo, which has, without doubt, the best view over the stone desert of the West, has been built on the Ordymnos, a so-called lava dome (see it as lava that gets pushed upwards and forms mountains). Also the tops of Lesvos’ biggest mountain range, the Lepetymnos, are lava domes, as are most of the mountaintops surrounding Eresos. The famous mermaid church at Skala Sykaminias has been built on lava rocks. Filia, Avlaki and Alifanta present ‘so-called’ dikes, plates of horizontal stone (solidified magma) sticking out in the landscape like enormous ridges. The Panagia Glikofiloussa Church in Petra has been built on a ‘so-called’ volcanic neck (the solidified end of a canal transporting lava when the volcano was active, with the sides now eroded).

The volcano’s also petrified thousands of trees, so that we now can enjoy the beautiful Natural History Museum in Sigri, where you not only find trees, millions of years old, but where you can discover all sorts of other fascinating geologic aspects of the island. If you don’t fancy popping into a museum during the hot weather, or you don’t want to go for a stroll in the Park of the Petrified Wood during the soaring heat, you might venture out by car from Andissa towards Sigri, where just after the junction to Eresos, there are construction works going on to widen the road. Digging into the ground they have found a whole museum-full of new petrified trees. Upon discovery they are first covered in plaster to protect them, thus creating a landscape of white phalluses. When you take a closer look at where the earth is removed you might see other trees, branches or roots that were covered by lava and rain millions of years ago, thus getting petrified and transformed into colourful fossils, and now seeing daylight after so much time.

During the last few weeks the Greeks have been under the spell of another road construction discovery. Close to Serres in the northern province of Macedonia: a grave was found, where two sphinxes and a huge statue of a lion (resembling the Amphipolis lion) stand guard over the entrance. The enormous grave dates from the time of Alexander the Great (356 – 323 BC) and because the last resting place of this great warlord has never been found, lots of people hope he will be hidden in this grave. Other, more sober, persons think it might be the grave of Alexander’s wife Roxane.

Alexander the Great and his wife Roxane are known worldwide and the discovery of their grave would bring lots of publicity. Just imagine a discovering of the grave of Sappho during the road construction at Sigri. However, the very important archaeological finds made this summer on Lesvos seem only to have attracted the local media. For a few years the archaeological service of the University of Crete has been digging around Lisvori and what they have found has not been a statue of a lion, but lots of stones that served 150,000 to 500,000 years ago as tools for the inhabitants of Lesvos. That means that the site is the oldest archaeological place in Greece and the East of Europe.

Can you imagine that where we now drive around in rented jeeps and cars, people used to roam in search of food with spears and axes hewn out of stones? In those times there was no agriculture. People survived by hunting animals and finding plants. Apparently the hunting fields of Lesvos were plentiful, especially around the Lake of Kalloni. The lake was only much later connected with the sea after a severe earthquake. Prehistoric animals as big as elephants, camels, rhinoceros, deer and huge tortoises were all living on the island (some bones of those animals found near Gavathas can be seen in the Natural History Museum of Vatera in Vrissa). People in paleolithic times did not depend on planes or boats: it is thought that the island was then still connected to the Asiatic plateau, so that it could be reached by walking.

It is known that the Romans used to come to have a holiday on the paradise-like island of Lesvos. I guess that people in the Stone Age were not familiar with the concept of vacations. When they wanted something different, they just moved elsewhere to another place and I bet in those years Lesvos already was pretty popular, due to all the tools that now have been recovered.

So stones can be mighty interesting. Without knowing you may have in you hands an antique item: a prehistoric axe or spearhead. Stones on Lesvos can also provide more surprises: they can hide amethyst or quartz. Even gold and silver used to be mined on the island.

Other less flamboyant stones can also surprise you. During volcanic eruptions, pumice can be made, as was the case during the eruptions on Santorini: lava cooled so fast that gas got trapped inside the clot. This porous stone has the attractive attribute that it can float. I read about it by accident and when the next day I took a stroll along the beach I could not believe my eyes: there was a piece of stone floating on the water! I thought that I might not have seen them before, because I had not known their story. A few days later I saved another piece from the sea, but since then I have never again seen stones swimming in the sea!