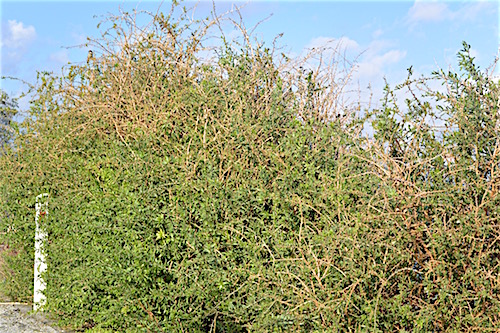 When the ice-cold wind blasts from the north and threatens with polar bears on the road, the lee of a sparrow bush is a perfect place to adjust your breathing and estimate if the damns of heaven will or will not open soon. It is a fine place to blow your nose or drag the zipper of your jacket up to under your chin, because in the winter it’s always is colder at the seaside than you think.

The sparrow bush is an unsightly, thorny, winter green bush, that grows along the beach, towering at least two meters over the road, offering shelter. It’s so ugly that each time the municipal men come in spring to take away the useless branches of the shadow-offering tamarisks, I am afraid that they will think the sparrow tree is a worthless one too and cut it down. Last year indeed they pruned the bush a bit too enthusiastically and I was afraid that the bare sparrow bush would not survive.

But it has proved to be a tough bush, that resists sea water, snow, some ice and especially that freaky cold north wind, as well as an extravagant pruning session. This winter it came back in all its glory and along with it – the return of its inhabitants. This is not an empty bush: in the cold season it houses a gang of lively sparrows.

I am not a birdwatcher, so forgive me if they are in fact buntings or some other sparrow look-alikes. How can anyone ever distinguish all those birds? I take it that they are not house-sparrows, because they live in that bush. Therefore they might be tree sparrows. Those little creatures do move all the time; they waggle, twitter and tweet all day long in the sparrow bush. When you want to photograph them, they disappear between the leaves deep into the tree and the only thing that remains is an angry rustling. They then keep very quiet, even if you wait a bit, in the hope that suddenly one will peep out from between the leaves to properly introduce himself: “Hello, I am Pete the Tree Sparrow”.

I was more lucky in determining what the bush is. It probably is a Lycium europaeum, also known as a box-thorn, wolfberry or tea tree. Tea? Yes. The leaves are good for infusions that may help poor eye-sight and other eye diseases and even help to prevent cancer. It is a healing sparrow bush. According to Wikipedia, there also should appear berries, in China named goji berries: much hyped as weight reducers. They’re not only good for slimming; the Chinese also think they might help you to live longer.

But I cannot remember ever having seen those little weight-loss berries between the leaves. I have noticed tiny, dirty white flowers, that, according to Wikipedia, flower in the summer. Although the ones in my sparrow bush appear in autumn and winter.

There may well exist a winter-flowering box-thorn without goji. I mean, this family has about 70 to 80 varieties. Pliny the Elder (23-79), a Roman botanist, who wrote one of the oldest surviving encyclopedia (Naturalis Historia) named the sparrow bush after Lycia, a region in what is now Turkey. But much earlier the Greek Theophrastus (371-287 BC) had already noted this goji bush in his books, mentioning that they produced excellent wood fire.

Sparrows have an extra bone in their mouth to eat (berries with) seed. Because they hang out day and night in those box-thorn bushes, I’m wondering if it’s because the sparrows are so mad for those goji berries, that before I have a chance to see one, they’ve already been consumed. In China the goji also helps to fight impotence in men: I figure that those little rascals might also use them for this purpose, because the sparrow population diminishes with the hour. Our houses nowadays are built so solid and so compact, not leaving any space for the house sparrows to nest and this – I imagine – might be so frustrating that some of them become impotent. Tree sparrows find their numbers declining because they seek food in the chemically treated fields. This can also cause impotence and there’s certainly not enough goji berry-eating ever to combat that problem.

Those small discrete sparrows are protected by the goddess of love: Aphrodite. They are known because for their busy sex life. The, to a human, impenetrable goji bush offers a unique opportunity. When you shelter from the icy north wind in the lee of such a bush, you may hear excited rustling and movement from deep within the bush. It could be that you are sheltering beside a popular sex-club.