A boat, a tree and Christmas 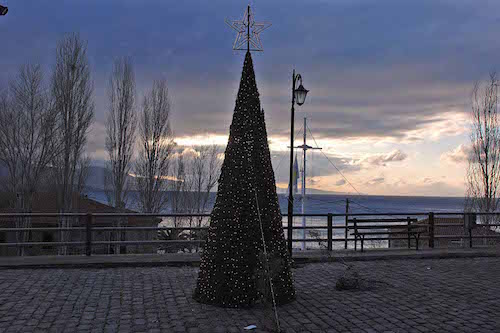 The Lesvorian landscape is filled with olive trees, but the island also has plenty of pine tree forests, which in the winter give a cozy Christmas atmosphere. However, they are not real Christmas trees; it’s usually fir trees that are decorated. What is the difference? The needles of a fir tree grow free from each other, the needles of a pine tree – the ones you find all over Lesvos – grow together in groups. That does not mean that branches of the pine tree, or even little pine trees, will not serve well for Christmas decoration, but Lesvos can never pretend to be the place where the Christmas tree came from.

That place is somewhere in the North of Europe, in the Baltic states or Germany, countries covered with fir trees. During the dark days around the 16thcentury, the idea came to decorate a tree for Christmas, maybe inspired by the medieval mystery plays, where often on December 24 the Tree of Paradise featured: the Tree of Life with apples. So it might be that the Christmas tree comes from the north. For decorating a tree we have to go back in time and to the south: to the Greeks and their Olympic gods. In ancient times the Greeks held up branch’s of the olive or laurel tree and decorated them with red and white threads of wool and walnuts, chestnuts, figs, apples and whatever fruit was left. This merry branch was called Eiresioniand was to thank the gods for the harvest, or – when the harvest was not good at all – to ask for a better one for the coming year. Homer mentioned this Eiresioni in one of his works: in autumn children went around the houses, carrying a decorated branch and sang songs with wishes for a good harvest.

Thesekalanda, the name for these good-harvest-and-good-luck-songs, are still performed by children going around the houses, but now at Christmastime. The children however no longer carry a branch, but a triangle to give the rhythm for the songs. When and why in history the Christmas branch was lost, I do not know. Before the triangle, the children carrieda little decorated boat in their handsand in Byzantine times it even may have been a little Byzantine church.

The ancient Greeks also decorated little ships during the very old festivities in honour of Dionysus. He was the only god who took a boat to visit the islands and this way a little ship became symbolicforthe arrival of Dionysos: let the party begin! But that is not the only boat that was decorated in ancient times. You also have Saint Nicolas, the patron saint of all seamen, whose Name Day is on December 6th. He saved more than one sailor from a rough sea. A decorated boat may also be a symbol for this white bearded saint. And then there are historians who think that such a beautiful little ship may also have been decorated just out of joy because a loved one returned safe and sound from the sea for the holidays.

Even though the Greeks may have provided the inspiration to decorate a fir tree, the decorated Christmas tree was first seen in the country in 1833. Otto, the second son of King Ludwig of Bayern, was seventeen years old when he was put on the throne of Greece in 1832. Not only did he bring an army of German servants, he also brought lots of traditions. Like a real Christmas tree, that every year was installed in his palace. And so, after endless wanderings the decorated olive branch returned to Greece as a decorated Christmas tree.

King Otto did not succeed in winning the love of the Greeks. In 1862 he was thrown out of the country, but the Christmas tree remained. The number of Greeks that copied the tree, was countless. Along with the Christmas tree he also introduced beer brewing to Greece, another German passion that remained. Even though that beer never became a Christmas drink.

I am happy that the Greeks have not been inclined to have a nasty national debate about what is more Greek: a boat or a tree as Christmas decoration. Most municipalities are even not making that choice and place both a boat and a tree in public places. An answer to the question what is more Greek probably does not exist: both the decorated trees and the decorated boats have their origin with the Greeks and their desire to enjoy life.