The downfall of the donkeys 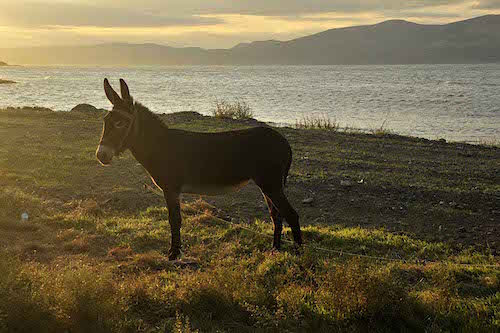 Donkeys have never scored highly in the scientific world. Even though they have existed for thousands of years, they have always been in the shadow of horses and only a few have become famous. Lots of people will not know his name, but the best known donkey is Nestor. He was the one who carried Maria to the stable of Bethlehem, where he and an ox patiently waited at the manger. The most well known donkey in literature might be Eeyore, a friend of Winnie the Pooh (A.A. Milne).

A search for different donkey breeds worldwide came up with only 185. The problem is that there are only few people that keep the donkey species pure: they are working animals and the mostly poor owners have never given a shit with whom a donkey was bred. Germany and France do have a considerable list of fancy donkey breeds; Greece officially only has the Arcadian, the Ellinikon and the Cyprus ass. But most Greek donkeys are of mixed breeds.

Donkeys originate from Africa and slowly found their way up north. For centuries they were indispensable as a working animal, until in the modern world their functions were taken over by machines and cars. Only in very poor countries they remain a trusty ally to work with.

When in the Sixties the mass tourism to the South European countries started, donkeys with a flowery straw hat and big sunglasses on postcards became a big hit. Now donkeys as well as postcards have become a rare sight: their numbers decrease rapidly. In 1955 there were still 508,000 donkeys in Greece, in 2007 there were only about 15,000 (I do not know the numbers for postcards).

Ten years ago you could find most Greek donkeys on the Peloponnese, about 5000, the Aegean islands had about 1700. I have no idea how much donkeys now still roam Lesvos. You see them less and less on the roads and since Michaelis, the Donkey King of Molyvos died last year, you will no longer run into a donkey safari. Some donkeys are still used for the olive harvest in the mountains, or by an old farmer, who has no car or driving license, to go to his plot of land. Even the garbage in Molyvos nowadays is picked up by a horse, since the last garbage man collecting the garbage with his donkey died.

However, there might be future hope for donkeys: donkey milk! In Ancient times this product was praised by Hippocrates and Pliny the Elder, being healthy, especially for people with a milk allergy. Also the beautiful Cleopatra loved donkeys: she bathed in donkey milk, just like Pauline Bonaparte (yes: the sister of Napoleon) to get rid of her wrinkles. Nowadays donkey milk has become popular in the cosmetic industry, proving that Cleopatra and Pauline were not so mad: donkey milk seems to smooth wrinkles.

You would say that we should exchange all cows for donkeys, but a donkey can only give 0.5 to 1.3 liters of milk a day, and only for 6 to 7 months a year. So I am wondering if a donkey farm could be profitable.

Slowly slowly the world begins to take interest in the donkey: in 2000 Europe made a new law that all donkeys should be registered and given a passport. Countries with most of the pure breed donkeys obeyed, but I wonder how many Greek donkeys have a passport. Just imagine an old farmer from Skoutaros going on his donkey all the way to the capital in order to validate the papers for his old donkey.

Also Greece is finally taking interest in the fate of donkeys: not long ago they passed a new law that forbids donkeys to transport more than 100 kilo’s a ride. On Santorini donkeys are still used as working animals: daily they drag thousands of tourists some 400 meters up to the village. Now the not so thin tourists have to drag themselves up. Also on Hydra, where donkeys are the only mode of transport, scales are required.

Taking a scale with you during the olive harvest is no option, so the life of a donkey here on Lesvos will not change. Lesvorian donkeys will slowly become extinct and soon Lesvos might be an island without donkeys.

Maybe all those donkeys without a passport must feel happy that they are not allowed to travel: in China the product ejiao is in great demand: a jelly made from the skin of donkeys, used in the still very popular Traditional Chinese Medicine. For ejiao about 4 million donkeys a year are slaughtered. We all know that these Oriental medicine practices lead to the endangering of many a wild animal like elephants, tigers and rhinoceros. Nowadays donkeys are also very much wanted in China. Let’s hope that Chinese people will not start poaching donkeys here, to smuggle them to China through the ports along with other things they buy in Greece. That way the Greek donkeys will stand no chance at all. So never sell your donkey to a Chinese!