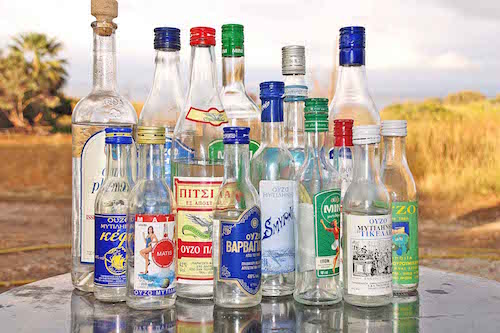 Water finally fell on the island, it was about time. Nature relaxed in the wet days and the ouzo producers no longer have to worry about enough water for their production. Many of them boast of the quality of their ouzo thanks to the wonderful mineral water on Lesvos. If their plants are to work full time, then of course there needs to be water flowing from the mountains.

The alcohol for the first distillation comes mainly from grape skins. Because in the middle of the last century phylloxera killed all the grapes on the island, for years there were not enough grapes to provide alcohol for ouzo production. Some had to be imported from elsewhere. But it’s a fact that the Lesvorian ouzo is the best in Greece. In Plomari most of the ouzo producers use, for the second distillation, nearly 100% alcohol made from the so called ouzo yeast (according to Greek law you must use at least 20%). Last year the European Union declared ouzo to be a protected Greek product.

The main herbs for ouzo are aniseed and fennel, but some also add cardamom, mastic, nutmeg, cinnamon or cloves. Ouzo is a herbal drink and has a fresh taste of licorice, some with a stronger taste than other brands. On Lesvos there are far over 40 brands. The biggest producers are in Mytilini and Plomari. Small villages like Agia Paraskevi, Skalochori and Petra make their own local ouzo.

Drinking ouzo is not only a matter of personal taste or just to have a glass of ouzo. Drinking ouzo is an art and a culinary joy. Whenever you order ouzo, some little nibbles are served with it (mezèdes), such as little fish which are said to taste best with ouzo. When there are no mezèdes served with the ouzo, the taverna is not a good one. Just like an invitation by a Greek for an ouzo means more or less having dinner.

When I recently invited some friends over for an ouzo tasting, I spent hours in the kitchen making great food. For the occasion I got some 13 different brands of ouzo, nicely decorating the table: Matis, Ouzo Plomario, Pitsiladi, Smyrnio, Mini, Fimi, Samara, Tikkeli, Kefi, Varvayanni, Psaropoela, Petra en Yannatsi. The alcohol percentage varied between 39% (Matis) and 46% (Varvayanni). As a kind of dessert I found a bottle of Turkish raki (45%) to taste, in order to make a comparison with all those Lesvorian brands. Surprisingly, this Turkish ouzo-like drink ended up being quite good.

A friend thought that we were probably going to get seriously ill. But drinking ouzo can be very healthy, especially when you have stomach problems. However, drinking so many brands one after the other is asking for problems. But we behaved very sensibly. Just as in a wine tasting, we threw the ouzo we disliked into a huge glass. But for days afterwards we couldn’t bear to look at a glass of ouzo.

There were many names we had to invent to give our verdict. Ouzo is never fruity or full, but can be perfumed or smelling like petrol. It’s a mild one or a strong one, it burns or tastes chemical, it’s not so bad or you can’t drink it, it’s okay or it’s yuck!, it is or it isn’t, it smells like medicine or licorice, it’s fresh or it’s like dishwater, it tastes heavenly or awful. I can tell you that tastes that night were varied. While some friends threw away their glass of Petra ouzo, I really liked to finish my glass. On a few brands we all agreed: Mini, Kefi and Pitsiladi became our favorites and ouzo Tikkeli was condemned, because everybody agreed about its bad flavour.

After 14 rounds of ouzo/raki we had no more energy to judge the design of the bottles. I started this whole ouzo tasting because of the new label for Mini ouzo. The merry girl from the Sixties has been replaced by a more modern looking young lady. She seems to be dancing like crazy, she’s got a more swinging skirt, her shoes have come off and her legs have a healthy brown colour. However she doesn’t look as happy as the Sixties’ girl. But at least the contents of the bottle didn’t change.

Since antiquity there existed all kinds of aniseed drinks like tsipouro. Ouzo only appeared in the mid 19th century. In 1860 Efstathios J. Varvayannis arrived on Lesvos and made his home in Plomari. He had already learnt the art of distillation in Odessa (Russia) and he applied this art to the famous grapes of Lesvos, its delicious water and aniseed. The recipe is a family secret and is still used to make the Varvayannis ouzo. In the Varvayannis Museum in Plomari you can see how they used to make ouzo and what has changed in the making of it.

When Greece was liberated from Turkey ouzo really became popular. Ouzo was once thought of as a replacement for the well known absinth, a drink that particular made the French and Vincent van Gogh crazy. Ouzo isn’t a dangerous drink, although it’s said that people from Plomari, who drink amongst others Varvayannis ouzo, which has the highest alcohol percentage, are crazy. There’s even a local saying: never take a woman or a donkey from Plomari.

Pitsiladi also comes from Plomari and I will never ever say again that all ouzo is good for me, unless it comes from Plomari. I also know some people from Plomari and they really are lovely people. Plomari has the right to call itself the ouzo capital of the island (and of Greece) because they do make really good ouzo. Most of them have a strong perfumed taste, which for a lot of people makes the good quality of the ouzo. The biggest ouzo producer of Mytilini, Mini, has for years been owned by the French company Pernod Ricard. Mini remains a local ouzo, now with a foreign taste. The new Mini-girl keeps on dancing, but her face shows tiredness and seems to say: “Help, I’m falling!”. Well, maybe it’s time to change my favourite brand…