Flowers of the wind 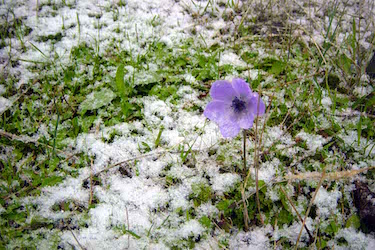 Even though I regularly eat chorta, consume lots of fresh vegetables and drink plenty of juice from the oranges that have started to fall off the trees, the flu hit me really hard.

And it’s not only me that’s not well. Outside, where one day the south wind blows our garden chairs towards the sea, the next day it’s a northern storm that blows them back again. The weather keeps on jumping from cold to warm and mild weather, from heavy thunderstorms and lots of rain to blue skies where majestic clouds hurry to some place else. The only things missing are the white capped Olympos and Lepetimnos against a pure blue sky.

All these changing moods make me low and now I’d better hide in my bed. You’d think that nature would hold back as well. Imagine my surprise at finding heads of wild asparagus peeking eagerly above the bushes in order to find the spring. Well, according to the popular Greek calendar, winter only starts in about a month, in January, and lasts until the beginning of March, when the asparagus are supposed to grow.

I also found some early daffodils that tried to poke their heads through an olive net. Two years ago I caught these spring messengers flowering too early, at Christmas, but now they are one more month earlier still.

Anemones are also called flowers of the wind: anemos is the Greek word for wind. According to mythology they were created from the tears of Aphrodite. This goddess of love was often in love. But when she met Adonis, a young and beautiful god, she fell deeply in love. The God of the war, Ares, however became jealous and sent a boar to attack Adonis. During the struggle Adonis lost his life, and Aphrodite started shedding many tears. The tears mingled with Adonis blood, the wind blew them away and everywhere you could find blood red anemones.

These red beauties only appear after the anemones of every hue from white to purple fill the fields. In mythology I couldn’t find an answer to this phenomenon, but I bet some jealous God will be in the story.

Maybe the anemones just count the windy days before opening. This autumn has already had as many storms as can blow in January. So it really looks like spring is needed. But we still have three months to go before we can welcome this joyous season.

Cyprus, where Aphrodite was born and where, according to Greek mythology, anemones are also born, doesn’t have normal days either. The island has problems because all those nasty clouds and showers never reached them. On the island, archbishop Chrysostomos called for all churches to pray for rain. The reservoirs on the island have so little water left that probably by the end of the year the water will be finished.

Here on Lesvos, the weather stays animated (also a word that comes from anemos). Rain is hammering against the windows. Well, asparagus, daffodils and anemones, do whatever you like. The weather is much like winter, my head is more like a thundercloud, my nose equals a rain cloud, I’d better go back to bed. Goodbye.