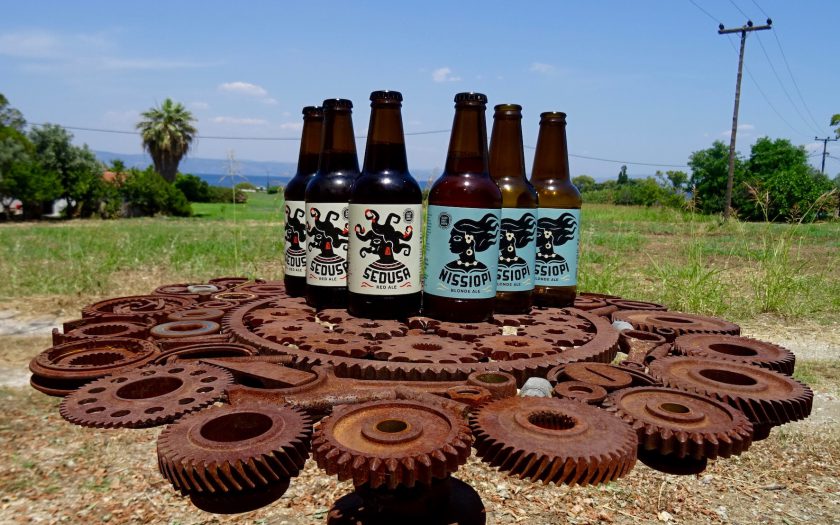 Have you ever heard of grape honey? It is collected on Santorini, where they allow the bees to feast on the grapes that lie in the sun fermenting to make the famous sweet Santorini wine. And what about leaves of the kitron tree? Those come of an old fashioned tree species, with odd looking fruit that taste a bit more intense than lemons. They still grow them on Naxos for Kitron liqueur. Soft spring water, filtered by centuries old lava stones full of local minerals also sounds tempting. What drink do you think is proud enough to contain all these divine ingredients?

Volkan, Nissiopi, Sedusa, Verginia, Septem, Crazy Donkey, Zeos, B29: all are names of Greek beers from small producers. The Volkan Brewery gives the best description of its brew. Who would think that beer contents grape honey, kitron leaves and lava washed water?

The Greek Gods didn’t like beer. In their times beer was associated with the nordic barbarians, even though the yellow juice already flowed abundantly in Iran and China, where – they say – beer was invented. Even the Egyptian Pharaohs gave their permission to drink this fermented brew. However the ancient Greeks preferred wine. As an exception they might have drunk a pint in honour of Demeter, when she had overseen a good harvest. The writer Xenophon mentioned beer in his famous Anabasis, Sophocles warned his readers to stay away from beer. Recent excavations in Greece have proved that indeed in ancient times a drink was brewed out of corn; and that it might have been consumed with a straw!

The Greeks only started to be interested in beer when Otto, the little son of Ludwig I of Bayern, in 1832 was installed as King of Greece. He moved to Athens with his entire German court, including three court brewers who had to make sure that the German soldiers got their beer. One of them was named Herr Fix. His son became in 1864 the founder of one of the Greek beers that – apart from Heineken and Amstel – is the most consumed in the country of the Olympic Gods: Fix. Alfa appeared in the Sixties and now is part of Athenian Brewery, a company owned 98% by Heineken. Mythos was a late baby in 1997, but got successful and is now incorporated into the Danish Carlsberg Brewery (who also has the popular Kaiser beer). How Greek are Alfa and Mythos?

Greek market leader Athenian Brewery (distributing also Heineken and Amstel) rules the country with iron manners. If you’re selling Amstel, then in most cases you are not allowed to sell a beer that is not from the same brewery. Which is unfair and difficult for the many new small breweries that try to sell their product in a growing beer market. Many islands already have their own beer: you will find Nissos on Tinos, Santorini toasts with Volkan and Crazy Donkey, Crete brews Harma and Chios has Chios beer, just as Corfu has Corfu beer.

The small Greek brewery MTB (Macedonian and Thracian Brewery) has Verginia beer and so much guts that they brought the mighty Dutch beer giant Heineken and his daughter Athenian Brewery to court, accusing them of unfair concurrence. They have done this in Amsterdam, hoping that the Dutch judges – probably better than the Greek judges – will decide in favour of the little companies and judge that Heineken is totally responsible for the unfair deeds of his Hellenic daughter. When the Dutch beer power gets broken in Greece, then all those refreshing little beers could possibly knock ouzo and retsina off their thrones of traditional Greek drinks.

Lesvos has also had its own beer since last year. The Sigri Brewery however is still ‘virtual’: it is a nomad brewery that does not own its own cauldrons and brews wherever it can. The result is a blond ale named Nissiopi and a red one called Sedusa. They do not have a smart publicity machine ‘selling’ you the taste of their brew. Will the Sigri Brewery take truck loads of Lesvorian source water that, with a little bit of imagination, still has a smokey touch from the violent volcanic eruptions that once put the island on fire? Will they take truck loads of ouzo herbs with them and boxes of Lesvorian chestnut, thyme, heather and flower honey? For sure the recipes were concocted somewhere in a house in Sigri: the beers have a taste full of fresh secrets. They are top beers for the beach, to be drunk under a scorching sun, at the water’s edge. And if we keep the consumption high, next year Sigri will have its own brewery.

Since June the big ferries to and from the mainland have reappeared in Sigri: the crates with beer can be easily loaded on the boats and shipped all over the world. Sigri is no longer just the village of the Petrified Trees, but also of Nomad Beer!