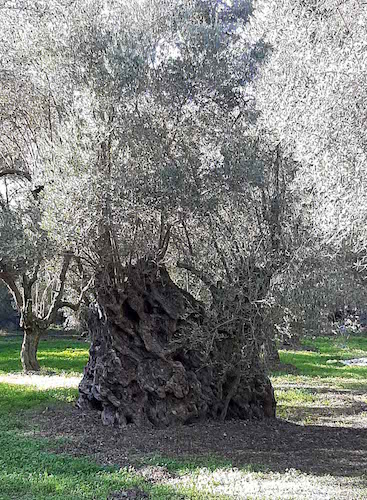 Lesvos is blessed with at least eleven million olive trees. Many idyllic little dirt roads crawl timelessly through hidden olive groves. Looking at the great knarled old trunks and seeing the play of the sun on the silvery leaves is as good as watching a sensational sunset.

Last week I took a walk among olive groves on the Gulf of Yera and was surprised to see so many really thick olive trees lulling in agentle sea breeze. Many were thicker than four people hand-in-hand around the trunk. A farmer said that some of them could easily be five hundred years old. There are more of these huge fellowson the island and I keep discovering more that had survived the slaughter of the Big Cold in 1850: in January for daysa freezing cold (that started with an unexpected fall of temperature from 10oC to -8oC)hadthe sap in the trees frozen, resulting in the death of most olive trees on the island.

Several countries claim having the oldest olive tree in the world. There are thousands-of-years old trees in Israel, Malta, Croatia, Portugal and Italy. The oldest Greek olive tree is on Crete, in Vouves and scientists think the tree might be 3000 to 5000 years old. That is even many times older than Methusalem!

According to Greek mythology the very first olive tree grew in the Greek capital on the Acropolis. There now remain only stories about how strong that tree was. Goddess Athena offered the tree to the capital of Attica, which preferred the tree above a saltwater spring made by the seagod Poseidon. The city took her name and the olive tree became a symbol for peace, prosperity, hope and resurrection

Poseidon, a bad looser, had the tree struck by a screaming bolt of lightning, turning the tree to charcoal. The next day however a new green shoot gave the tree new life: resurrection. In 480 BC the tree again was burned by the mighty king Xerxes who turned the entire city of Athens to ashes. Again new shoots saved the tree. I don’t know how the tree was finally destroyed: now there is a relative new one standing guard on its holy place, just besides the Ereicthion.

Besides olives and oil the olive trees also provide fire wood, strong enough to slay lions. That is at least what the myth says about Hercules who knocked down two lions with a club of olive wood, after which he strangled them with bare hands – first the lion of Cithearon and much later the Nemean lion; he had to kill the last one as one of the twelve ‘labours’ which were laid upon him by the King of Mykene, as a punishment for having killed his own children.

The olives themselves are knocked out of the trees by long sticks of chestnut wood (debla), a wood even harder than olive. The smaller more flexible little branches are good for woven wreaths to crown Olympian champions. One twig offers the possibility for peace. The oldest image of peace-twigs was discovered in Egypt, coming from a time long before the Greeks made it their symbol for peace. The olive twig is depicted on many Greek coins from ancient times.

Now the olive fields are scattered with heaps of these symbolic twigs. It is harvest time and everywhere you hear the clicky-de-click of the long sticks. Harvesting on the island has not changed much since ancient times, even though some now use little machines to empty the trees. Bigger machines are of no use on the island. Lots of trees hide in remote or difficult to reach areas and on impossibly steep slopes. Thousands of terraces were built to give olive trees a place to thrive (pezzoulas), along with the same number of little retaining walls. The invention of the car, especially the little trucks used by most of the Greek farmers, must have been a gift from heaven: the bags used for the transport of olives can weigh 60 kg. These used to be carried by donkeys and mules. In earlier times donkeys were even used to press the olives: they walked endlessly in circles to keep the heavy millstones turning. Nowadays a donkey is only occasionally seen bringing the sacks down from the terraces to a waiting truck.

Lesvos counts about 122 olive trees per inhabitant (for the whole of Greece that figure is 9.5, in Spain 5.4, in Italy 3.0) but is doesn’t have many big farmers. Hard work is required to attain ‘liquid gold’ (as Homer once called the olive oil). 3 to 5 kilo of olives produces 1 liter of oil, this year a liter fetches about 1.80 to 2.10 euros (according to the quality). That is not much to live on, but for many people it is a welcome supplement to their meager incomes. Since the crisis many neglected olive groves have been resurrected and given new life.

In 500 BC Herodotus wrote that olive trees were so sacred that only virgins and eunuchs should be allowed to touch them. That must have given happy sights during harvest times! Antique trees must have many stories to tell, could they speak. Those hundreds of years old trees should, just like the petrified trees, be considered as monuments of the island.