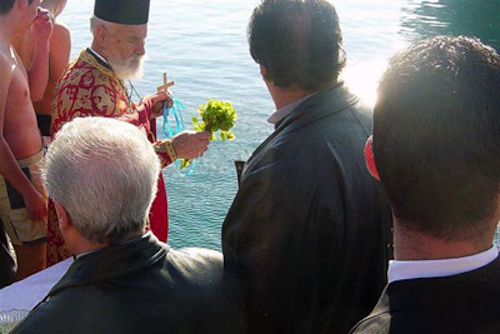 Today is a day you can write about each year. In many countries the 6th of January is Three Kings Day, in Greece this day is called Epiphany, the day of Cross-throwing, the day that the priests go through the villages and cities, followed by everybody who is important in the municipalities. The priest holds a cross and a bunch of basil, which he uses to bless everything he encounters. The procession ends up at the waterside, where boats and water are blessed as well.

This is the most sensational part of the day, because the pappas throws the cross into the water and some stout young men will dive into the freezing water in order to get the cross back. The one who finds the cross will win some money.

Epiphany is also the day when the Kallikanzaris will disappear until the next Christmas. I already wrote about those little creatures (see Boulevard News 18 December 2006) that during the twelve days from Christmas Eve to Epiphany, will tease the people by destroying their food or climbing on somebody’s back. Epiphany, the day when Greeks will go in procession through their villages after which they will enjoy a large meal, is finally the end of all those celebration days.

The so-called Three Kings Cake is then already long gone. The Greeks eat this cake, the vasilopita, in which they hide a bean or a coin, on New Years Eve. And although those Three Wise Men have a place at the Greek crib, they have no day of honour. They do participate in some processions, as do the Kallikanzaris that are represented as hairy trolls, apes or angry looking dwarfs. In some Greek areas these processions look like a merry carnival.

In Molyvos it’s only the priest followed by the notables dressed up in their Sunday best and spiky heels, that parade through the village. A little sun tries to give the day more feel of celebration. The strong cold has left the air, so the people don’t have to suffer from the cold during their village procession and the cross-throwing.

Tomorrow there will be another celebration day. It will be the Name Day of Yannis, a name which is given to all too many Greeks. That will be another day of festive meals. Then we will have to wait for the Carnival, after which Lent begins. And then, yes, then summer will start again with Easter.