Where is the Greek sun? 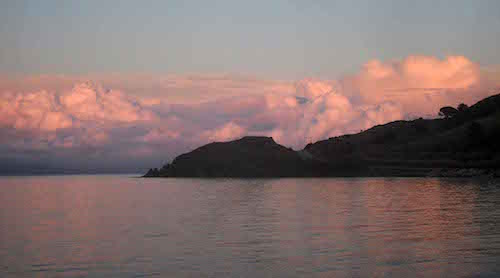 More than once, at the beginning of this summer I said: “It’s good that there are no tourists around”. The weather kept putting on and off her winter coat and, except for a tiny heatwave in May, the summer has kept hesitating to start.

Summery temperatures trying to reign over the island are sometimes chased by a chilly wind or a roaring thunderstorm — sometimes with hail, making you look for a pullover. The clouds keep on sneaking into the sky and a cloudless day has yet to be seen. Although even with those pop-up showers, the island has had more sunny hours than cloudy ones.

They look cozy, those small woolly clouds in the sky. White sheep clouds (cirrocumulus) make me very happy, but waking up to thunder does not encourage me to get out of bed. That happened a few days ago, when a nearly black sky hung over Turkey and growled menacingly. The falling rain was clear to be seen, as was the lightning tearing crisply through the air.

Turkey sends boats full of desperate refugees and it regularly overawes the island with deafening jet fighters. It is also able to send those thunder showers across the sea. It’s good they are not bombs: as you cannot steer those thundering clouds, they use the air streams and have their loads fall wherever it suits them. They cannot be controlled by the Sultan.

I don’t like those sermons of Zeus,who reigns over the weather, and stay inside. Pitch black skies sometimes take hours to decide where to go. I have to console myself with the idea that when they empty their buckets, I won’t have to water the garden. But here, on a point at the northern coast of Lesvos, it seems there is an invisible defense line against the rain. We get that scary thunder, but not the welcome water from heaven. Full of jealousy I view pictures of a garden of friends, living elsewhere on the island, who have received plenty of heavy showers.

That shower of a few days ago turned very cleverly around the north of the island to drop the rain elsewhere. But that did not clear the sky. Everywhere above the island the mighty cumulus clouds grew with their white water particles and ice parts like enormous cauliflowers — snow white against a pure blue sky. It took your breath away to observe their slow dance across the sky. You seldom see them as that beautiful.

Today it is time for white broccoli: above Turkey small cabbages silently revolve around each other, not as spectacular and totally unsure about their plans. The temperature rises, which forces the clouds to form an anvil to slay the lightning in it. But the Turks don’t always share their rain, often we just see the rain, even smell it, but do not feel a drop of water. A tantalus torment.

I wonder if the weather also has corona: the clouds a spitting breath. There are days that the clouds sail across the sky, keeping a socially reasonable distance. The bulging cumulusclouds however don’t keep enough distance. I presume that they have a better ventilation system than airplanes, so that embracing each other high in the sky will not be contagious. And all that water from heaven is very good for the economy.

Lesvos is a paradise for anyone afraid of corona. There is nearly no public transport. On the beaches you would have to go through a lot of effort to be able to engage with other beach users. On the restaurant terraces you can easily keep four tables’ distance from the other guests — if indeed there are any. The little breezes will have shifted bad bacteria high into the sky. Many people believe that high temperatures and the sun’s rays will make the virus disappear like a cloud before the sun.

It could also be that the clouds are taking advantage of the nearly airplane-free sky and having their playground extended to including the normally cloud free summer destinations. By July 1 airplanes from abroad will be welcome on the island. I wonder if they are able to chase away those bullying masses of clouds.