They are coming: the Cool and the Green Pope! 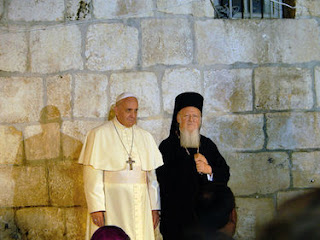 (The Cool and the Green Pope)

The only man in whose hands I would trust the world is Pope Francis. I said that recently in a discussion about failing world leaders. To me he is the only charismatic person with a bit of influence who cares honestly for our world. Although the influence of the church has shrunken a lot in our godless society and even when he holds the mace, I am afraid that big money nowadays has more power than God.

These days the islanders have lots to chat about: the deportation of refugees that is contrary to human rights, the hunger prevailing in the refugee camp at Moria, and possibly the worst tourist season ever that is approaching. The arrival of movie stars, artists or musicians provide a welcome diversion in the generally sad discussions and now the island is happily murmuring over the latest news: the Pope is coming to Lesvos.

I have never been a fan of the Pope. Earlier Popes were no more than plaster saints. I was shocked watching the television series Borgia, which related the story of the family of Rodrigo Borgia, also known as Pope Alexander VI. He did everything God ever forbade and he would have joined ISIS if that would have given him another kingdom. After him the popes became more pious, maybe even too pious.

I have lost faith: in a God who accepts so much sorrow in this world and in those old crooked men wearing clothes adorned with gold and jewellery in the Vatican. That has changed a bit with the arrival of Pope Francis. For the last three years he had a fresh wind blown through the corridors of the Vatican: not only refusing to wear too much bling-bling, this Vatican enfant terrible loves the simple life and has a wise tongue which he uses to tell the rich and powerful which responsibilities they are neglecting. A really saintly man who has to take it up against the complacent and old-fashioned bishops in order to humanize his religion.

As only the second Pope to visit Greece since the Big Schism in 1054 (when the christian church split into the Roman Catholic and Easter Orthodox churches) Francis seeks rapprochement between the two religions. But until now they have not even managed to make Easter for the East and West coincide every year, instead of only once every four years. The Orthodox Church still calculates the day of Easter according to the Julian calendar and the Catholics according to the Gregorian calendar. This means that this year in the West all the Easter eggs have already been eaten, while in the East they are in the midst of Lent and only on May 1st will the lambs be put on the spit.

The Pope does not come alone. Visiting the refugee camp at Moria, he will be accompanied by a man who, just like him, wishes for rapprochement with other religions: the head of the Orthodox Church, the ecumenical Patriarch Bartholomeus I, who has his seat in Istanbul (a town still stubbornly called Constantinopel by the Greeks). So for all Greeks once more the song: Istanbul (not Constantinopel).

Bartholomeus I earned his nickname Green Patriarch or Green Pope because of his manoeuvring for a better environment. I imagine that these two gentlemen like each other: the Green and the Cool Pope. Who knows if their visit together may bring more than just solidarity with the refugees. They should join each other to fight evil and put themselves forward as examples to their believers. Certainly the Orthodox Church also needs some fresh air: to teach their pontiffs some mercy and less bling-bling. In the garden of Bartholomeus I you will find priests who, like disobedient thorn bushes or overconfident ramblers, look more like bankers and are not prepared to help Greece out of its ocean-deep recession. If the Greek Church paid taxes for all its land and monasteries Greece would flower again.

According to the media the Popes will not have time for a touristic excursion. But I think they really should visit the grave of Papa Stratis from Kalloni, a priest who is the example of a Good Samaritan. For years he helped the poor and refugees. Last summer, as ill as he was, he kept on taking care of all those thousands of refugees who passed through his home town. He died last September and for me is a Saint.

It will be the first time in history that a roman catholic Pope visits Lesvos. This poor and crisis-ridden Island (and Greece) will be happy to receive this Holy man. I hope with all my heart that Francis will not only cast blessings with the flutter of his hands, but will also use his mouth to voice judgement on inhuman Europe. Long live the Cool and the Green Pope!