The village of Djam 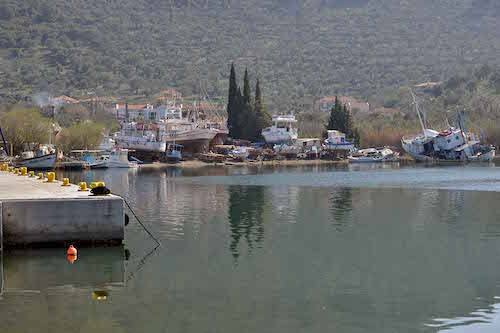 You can wake me up for rebetiko music. I love the melancholic tunes. It does not make me homesick for my country, it makes me long for the days in Greece before the crisis, when everybody seems to be happy and lots of live music sounded in the kafenions.

But this music has its origins in expatriation. It came with the more than one million refugees after the Greek-Turkish war, that ended in 1922, followed a year later by a huge exchange of people. The oriental tunes and the swollen singing are clearly of Arabian roots. The words speak of homesickness, longing, love and later revolution. The first rebetiko songs were about a happy world the Greeks had to leave and about the horrors they lived through during the last days in the Ottoman empire, like in Smyrna (Izmir). Later some songs were about the wine and drugs that could soften their unhappiness.

I liked the movie Djam immediately upon seeing the first scene: a girl on a mountain dancing along a gate, singing a beautiful rebetiko song, her movements nearly unorthodox. It gave away what the movie would be about: a pretty crazy girl (her mother a well known rebetiko singer who lived and died in Paris) living with her uncle on Lesvos, in Skala Loutron on the Gulf of Yera. The uncle sends Djam to Istanbul to get an important motor part for his boat. It is a kind of road movie where Djam dances and sings rebetiko whenever it suits her, just to forget, to celebrate, to please or to comfort.

There might be two reasons why the French director, Tony Gatlif, chose to begin and end in Skala Loutron. This little hamlet has one of the very few shipyards left on the island. Its old wooden docks clearly remembrances of another world, when rebetiko still could be heard on each corner of the street.
The other reason could be because the village has a little museum about the Greek refugees who last century poured into the island from Turkey. Many of them settled in Skala Loutron, but also elsewhere on the island. In the museum you will find a treasure of photographs, documents and objects of these Ottoman Greeks, giving an excellent image of how they lived and what they lost. No wonder they needed music to comfort their souls.

Gatlif could not have foreseen that when he shot the movie on Lesvos, it was the time when the refugee crisis was at its highest point on the island. And he could not ignore it. So he wove that actual situation through his movie about refugee music and the current Greek crisis. More than once Djam sees signs of the refugees on her way back over the Turkish mainland to Greece, with as a giant climax images of the most sad monument of Lesvos: the big mountain of life vests at Eftalou.

Djamis a modern rebetiko movie: not a historical document but a movie that shows in an original way the Turkish roots of the music and the actual problems of Greece.

Last week I was in Skala Loutron, enjoying a rare spring day with sun and I sat at the terrace of one of the kafenions, looking out over the water. At the end of the shipyards there was a white boat, I thought it was the boat that plays such a beautiful role in Djam (it was not, I later realized). I thought about this splendid movie I enjoyed so much, saw the crazy Djam singing and dancing. And I thought about the refugees who still come daily. I wonder if they also carry their music with them and if, when they settle, they will create a new music style.

The popularity of the Greek blues, the old rebetiko music, reached its peak during the Second World War and the Greek civil war, when they also became protest songs. In the Fifties and Sixties they lost a bit of power but remained popular. Nowadays the old rebetiko songs pop up again, because of this new crisis. They haunt us with their melancholy and touch the heart.

When you walk around in the little village of Skala Loutron, you might think it is boring there. But it has more history than you see at first sight and it has made it all the way to the famous film festival in Cannes, where Djamgot its premiere in 2017. It did not win any golden calves, but it did receive good reviews. However, the kafenion of the uncle of Djam could not be saved by this beautiful movie.