The miraculous world of Maria 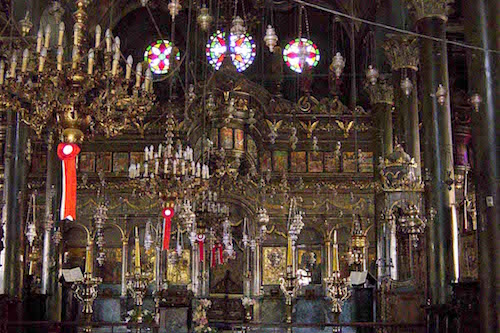 (Interior of the Maria Vrefokratousa church in Agiasos)

On Monday August 15 it will be Maria Assumption. After Easter this is the biggest holiday in Greece: when Maria will be taken into heaven. It is said that Maria spent the last years of her life in Ephesus, across the Aegean in Turkey, just opposite Samos. The Virgin Maria had been taken there from Jerusalem, by the apostle John, in order to escape prosecutions.

On a hill, just besides a source John built her a house. Maria died after nine years living in Ephesus. The apostles buried her coffin in a cave a few kilometres from her house. St. Thomas however couldn’t make it on time for the funeral and when he did arrive, they all returned to the cave. Opening the coffin so that St. Thomas could have a proper goodbye, it was revealed that Maria’s body was gone, although the coffin had been properly locked before opening: Maria had been taken to Heaven.

A German nun, Anna Katherina Emmerich (1774 – 1824), had during her life experienced plenty of visions from the lives of Jesus and Mary. When, at the end of her life, she became seriously ill, there were few people she allowed around her. One of them was the German poet Clemens Brentano who wrote down Emmerich’s stories and later published them.

She also described very seriously the house of Maria in the surroundings of Ephesus. Curious people, reading her visions, started to look for that house. In 1881 a priest from Paris found the location, but nobody believed he had found the house of Mary. Ten years later a group of people found the same location and this time they were believed. It was the ruins of an old monastery, with behind a path leading to the top of a mountain, a little stream passing by and a source. It is amazing to think that a German woman, who had never been there, had described this place so accurately. Later scientists revealed that under the remains of the monastery from the 6th – 7th century, there were indeed walls from the first century. Today the house of Maria has been rebuilt and it is a very popular place of pilgrimage.

Greece’s number one place for Maria pilgrimages on the island of Tinos – say: the Lourdes of Greece – is also connected to a story from a nun who had a vision. The nun Pelagia was aged only fifteen in 1822 when Mary told her where to find an icon. People went digging in the field she described and at the second try they indeed found an old icon, which is said to have been made by the evangelist Lucas. It has been attributed with so many miracles, curing people from illnesses, that the church Our Lady of Tinos (Panagía Evangelístria) was built to house the icon. It now attracts thousands of pilgrims. Even today many people pray to Maria to be cured and in return they promise to travel to her church on their knees, or even rolling or on their stomach..

Lesvos has two pilgrims centres dedicated to Maria: the Maria Vrefokratousa church in Agiasos and the Maria Glikofiloussa church in Petra. The story of the icon in the church on the rock in Petra says that the icon belonged to a fisherman who always took it with him. In a rough sea the icon was lost. Once ashore, the fisherman saw a tiny light glowing on a huge rock and there he found his icon. He took the icon back to sea and again the icon got lost. When he found the icon for the second time on the huge rock, he realised that he had to build a church and leave the icon there. The church is from the seventeenth century and was rebuilt in 1840.

Another miraculous story is that of the Church of Lagouvarda in Markopoulo on the island of Kefalonia (Cephalonia). Each year in the first weeks of August this church is visited by snakes! When the people come to honour Mary during the 14th and 15th of August, the little snakes not only crawl around the icons, but are also passed from hand to hand by the believers. When Assumption Day is over, the snakes disappear as quickly as they came. These snakes belong to the Catsnake family (Telescopus fallax ) and are said to bring luck. Their non-appearance in the church during two years was seen as a bad omen: in 1940 when the island was occupied by the Italians during World War II and in 1953, in the midst of August when serious earthquakes destroyed large parts of the villages on the island.

It is another story involving nuns explaining these odd visitors. Once a monastery with nuns in Markopoulo was besieged by pirates. The nuns were very scared and they prayed to the Holy Mary saying that they preferred to be changed into snakes rather than fall into the hands of the pirates. And so it happened. When the pirates finally penetrated the monastery they were met by hundreds of snakes and they fled as fast as they could, leaving the monastery unharmed.

Here in Greece Mary keeps people occupied with her miracles during the month of August; the faithfull flood all the different places of pilgrimage, such as Agiasos and Petra, where it’s so busy you wouldn’t think there is a crisis going on.

I myself am not such a big believer, but I have to thank Mary on my bare knees for bringing back my dog Humpedumpy. We had to take her to the vet in Mytilini and when she arrived in the city she panicked, got off her collar and ran away. For ten days she was lost in the big city. Then a friend phoned me saying that she had seen the dog walking in a busy street outside of Mytilini where I was later able to pick her up. In the meantime my beloved Labrador Black Jack has died after a short illness, but I guess no miracle can be produced to bring him back.