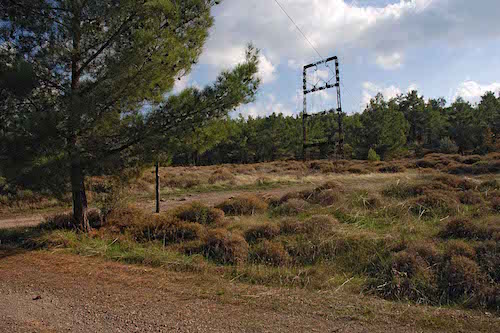 (Remnants of the cableway near Pessas)

Life and Times of Zorba the Greek from the Greek writer Nikos Kazantzakis was published in 1946, but became really famous in 1964, when a movie was made of the book by the Greek director Michaelis Kakoyannis. Believe it or not, the movie not only made Zorba world famous but also introduced a new popular dance in the world: the sirtaki.

Actually the sirtaki is an invention of the choreographer of the movie, because the leading actor Anthony Quinn was too stiff to dance the traditional dance hassapikos which is described in the book. Sirtaki is such a merry dance that you get even the most stubborn donkey up a mountain with it (see this cheerful movie). Just like the sirtaki is an invention, the protagonist in the movie is fictitious, even though Kazantzakis’ friend Yorgos Zorba was the inspiration for the book and the man who conquered the hearts of so many.

The story is about an English/Greek writer, Vassilis, who wants to open a mine on Crete. He meets a miner called Alexis Zorba and asks him to come and work in the mine. Zorba turns out to be a man full of stories and philosophies, a source of information for Vassilis who is trying to write a book about Buddha. Zorba loves women, satirizes the small mindedness of the villagers and that of the pious monks; he is full of ideas, looks at life as a challenge and is not afraid of death.

Was there a predecessor? The book The Colossus of Maroussi by the American writer Henry Miller also is about a friendship between a writer and a Greek. Miller met Yorgos Katsimbalis (1899-1978) when he visited Greece in 1939. This Greek writer and founder of the magazine Ta Nea Grammata lived just like Zorba: having a spirited mind, a love for drinking, long discussions and social outings. Maybe this Greek way of life – taking life as it comes – made even more impression on Miller than all the archaeological sites that they visited together (even though Miller described them as fabulous). Miller did met his Zorba, but was forced to go home when the Second World War became a serious threat.

The Colossus of Maroussi (the title refers to the name Miller gave Katsimbalis) which he wrote upon returning home is a strong ode to Greece and was published in 1941. In the Fifties and Sixties the book made many people decide to visit the country of the Greek Gods and I guess in those times there was no better publicity for Greece than this book.

Neither Henri Miller, Katsimbalis nor Jorgos Zorbás visited Lesvos, as far as I know. Of all famous people produced by the island, maybe it is the painter Theophilos who comes closest to the Zorba character: a man living without conventions, dressing as he wanted and all the while studying the people around him in order to make paintings.

Also Sappho dearly loved life and wrote about it. But this lady was more into the dark blues. She introduced poems based on the stirrings of her soul, mostly causing pain in the heart.

Another free-minded person coming from the island was the famous Barbarossa. Whether this pirate greeted the days as if everything was new, is not known.

But there must have been a Zorba on the island, who just like Alexis, build a cableway. Not for a sawmill, but for the resin, which last century was harvested on the island, especially in the woods around Megali Limni and around the waterfall of Pessas (Polistami). There you can see some of the remains of a cableway going all the way down to the Gulf of Kalloni near Skala Vassilika, from where the resin was shipped. And it seems that (unlike the fictional character) this one did do the job.

Lots of people visiting Lesvos, return yearly: the island might be the spot with the largest number of repeaters of all of Greece. There are even some among them who have come here since the Sixties. When you hear their stories about the past, you might think that they too met their Katsimbalis: they spent hours in the cafenions drinking and talking, making adventurous trips into nature, and mostly accompanied by one or more locals. It seems that in those early times the island was full with Zorbas.

It is sometimes said that time has come to a standstill on Lesvos. It is a fact that the island is not flooded with masses of tourists. In the sleepy villages men sip at their ouzo, men who were sitting there long before Zorba appeared in the cinemas. The mysterious monasteries (some still habited by dusty monks, others regularly busy with visiting pilgrims) make you realize that there is another life besides the one in the over populated western world. Even the few modern windmills, towering high on inhospitable mountaintops already seem part of history.

Timeless or not, there still are Zorbas on the island: men keeping some sheep and some olive trees and having a simple but happy life. You may meet them in the cafenions where they take their daily ouzo and eat their Mèzes. Enjoying life with a small income, it is what lots of Greeks still do, forced by the crisis or just because it is their way of life.