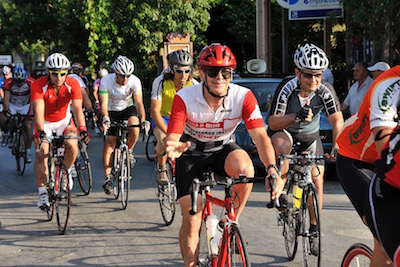 Last Sunday Molyvos was filled with cyclists instead of with refugees. Big and small, old and young, it seemed like every bicycle owner in the village was participating, under the burning sun. The steep mediaeval streets, the bumpy boulders and sharp bends are an ideal challenge for the village ride which was running for the second year.

For centuries the donkey served as transport in Greece. Until last century when they were (sometimes literally) parked beside the road to make room for the car. Lots of Greeks still see an aftekineto (car) as a motorized donkey, thus creating dangerous traffic situations. It still is very common to stop in the middle of the road in order to greet a friend coming from the other direction. And passing another car on a bend is also very common because on a donkey you did the same, without taking too many risks. And I won’t even talk about all those sidelined donkeys that are parked on the streets in order to eat the green green grass at the side of the roads.

There is a new road user, seen more and more often emerging from a difficult bend or on winding roads: the cyclist. Cycling in Greece is getting hot and drivers now should seriously get used to this group that might come sailing down a slope or bend in the road at full speed. Do you recall ever seeing a cyclist many years ago in Greece? It seems that a first one was seen in 1880, according to a book about bicycles in Greece, from 1880 to 2012 (Το ποδηλατο στην Ελλαδα).

Cycling is not expensive and the bike is a very good way of transport in these times of crisis. Although I can imagine that not all Greeks have the money to buy one. But bike lovers are doing their utmost to promote this vehicle: in the big cities as well as on the islands more and more bike events are being organised, like the Athens Bike Festival, this year taking place on September 18 – 20, and also Mytilini, who, in spring for some years in a row, gets a part of its inhabitants onto two wheels, so that its streets are crowded just with bicycles.

Probably due to the mountain stages in the famous tours, sport cyclists also love to go around on the island. For years now the Lesvos Brevet event is organised for some tens of fanatic cyclists who are more than amateurs. Throughout the year they go to different islands and places on the mainland of Greece to obtain another brevet and the distances grow longer and longer. This year in the Lesvos Brevet there was a choice of two distances. The 400 km race has already taken place in March and the 200 km (with the start and finish in Molyvos) will take place on Sunday June 7 (last year the distance was 300 km). The course clearly is not for foreigners (for years my brother is the only non Greek speaking participant) because all information is only in Greek. Which is a pity, because this tough course leads you in one day all over this beautiful island. Imagine if the Tour de Lesvos becomes as popular as the Tour de France?

The very newest road user however is the refugee. They trudge over the many roads of the island towards the capital of Mytilini, protecting themselves against a burning sun with t-shirts on their heads, with all the belongings they have left carried on their tired backs. For them, there are no checkpoints where water or a bite is distributed to revive their spirit in order to accomplish this two (or three) day tour. And you will see them everywhere: going to Plomari, Sigri, Mandamados, Kalloni or Molyvos. They are not difficult road users, but in the night I can imagine that they are at peril, because they are difficult to see on the dark roads of the island.

Do we have to wait until an accident occurs, like the one in Macedonia, where 14 refugees were run over by a train, while they followed the rails in order to find a safe place? Is it humane that we let women, children, elders and wounded people make this long journey on Lesvos?

I live at the border of Europe. In the south this border is flooded by refugees. But the northern countries don’t care about their own borders. When the refugees safely reach the shore here, they cheer because they think they are in Europe. Well, I don’t think so. They have arrived in Greece and there will be another long journey before they reach Europe. Europe is ruled by its northern countries who loaned so much money to the southern countries, who now can no longer pay their debts and will soon become as poor as most of the refugees. I bet the northern countries would love to install an iron curtain across the middle of geographical Europe between the poor south and the rich north (was the European Union not created just to have this frontier disappear?).

All that those very well paid people in the European capital Brussels have come up with, is to catch the smugglers in Libya (no one talked about smugglers in Turkey) and they even intend to destroy the boats the refugees come on, afraid they will be re-used. Well, here that job is already done by the refugees themselves: all boats reaching the Greek shores are destroyed. How stupid is Europe?! Put international police at its frontiers to take in the refugees, to register them and give them a ticket to a country they can go. Show everybody that it is Europe’s border, and not only that of Greece, Italy or Spain.

I am afraid my country (the Netherlands) is one of the worst. They do not want to take in more refugees from the southern countries and the government will take ages to decide if they agree with what is decided in Brussels. The Dutch government behaves like a class of little children and I bet they first want to go on holiday before taking any serious decision (hoping that this flood of refugees might be over then).

Well, all European politicians: I challenge you to come for a holiday to Lesvos and bring your bicycle with a little cart, in order to be able to distribute water and bread to all those refugees who have to walk for days along Lesvos’ roads, looking for Europe.

PS I am happy to tell that there are some exceptions: Norway has announced to help and will amongst others finance a new refugee centre (on Lesvos). Bravo Norway!