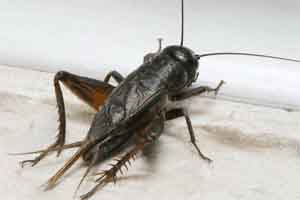 On these lovely late summer days crickets are still singing a lot; the weather is magically warm and sunny. For most people a cricket is a cricket although, as with other animals, there are many different kinds of crickets: tree crickets, prairie crickets, bush crickets and field crickets. They all look a bit different, one resembles a grasshopper, another, like the field cricket, looks more like a black bug with long hind legs and small wings. It is easier to hear a cricket than to see him. When listening to their singing, it is difficult to detect this maestro.

Crickets are known for their singing. The Chinese especially love them. Chinese history can even be divided into dynasties­­– those without crickets, those with singing crickets and, later on, those with fighting crickets. I can’t believe that crickets are loved as pets because of their musical talents: the sound of a cricket close up can only hurt your ears. And I do believe that cricket fights can be better than bull fights; but as I don’t like violence, even between two crickets, I can’t see the fun in watching two animals fighting.

The general sound of crickets does give the landscape a nice atmosphere, as does the tinkling of the bells of sheep and goats. Technically speaking, crickets don’t sing but ‘stridulate’. By rubbing one wing over another they can produce a sound of many decibels. And some stridulations  are more melodic than others.

The Chinese put their singing crickets into small and elegant cages and in the Forbidden City those cages – made of fine bamboo or even gold – were far more beautiful than the crickets themselves. The Communists didn’t approve of this cricket business, as it was a bourgeoisie past time, so for several years the crickets were banished back to the nature. Nowadays caged crickets are back in the markets, not only for their singing or fighting, but for their cultural value: a cricket in a Chinese house brings luck. Not everybody agrees with that. In different regions in Brazil they believe that a black cricket in the house will bring sickness and in another region it can bring death. But there is also a Brazilian region where a singing cricket in the house might bring money and in another region it may announce a pregnancy.

I’m with the Chinese in believing that crickets in the house bring luck, because last week I had the Cricket Rush on my house, a phenomenon that also happened last year and for which I have not found a scientific explanation. On Lesvos it seems that each season brings a small plague. In the spring the house is attacked by thousands of caterpillars that climb up the walls, the mid summer heat waves can cause ant invasions, along the end of August a certain kind of beige spider runs around and now we get a Cricket Rush.

Last week when opening the door of my house, I was greeted by an army of black crickets ready to jump into the house. Tramping my feet and clacking and quickly shutting the doors could not prevent this rush: the house was invaded by crickets and some even had the nerve to start shouting: it was deafening!

I think that these culprits were field crickets, fall crickets to be precise (there are also spring field crickets and, as you can guess, they are to be seen in spring). They were black, looking a little like cockroaches suddenly running and jumping around in the house. The rush took some days and even now I am still finding plenty of field crickets on their backs: stone dead.

There was one plague that did not come this year: the wasps in August. In the past wasps could spoil many dinners by aggressively begging for food and making you flee into the house. I do not know if the absence of wasps was only at my place (I have seen only a few), or in the north of Lesvos, or on the entire island or even in the whole of Greece. If there also were not many wasps everywhere, this might be a cause for concern. Bees are disappearing in large numbers and this phenomenon is considered by the scientists as a threat for humanity. Wasps have the same function in nature as bees: they fertilize plants and however awful a bee or wasp sting can be, without these insects there will be fewer flowers and less food. So really a wasp plague should be considered a healthy one. But even though the Chinese consider crickets in the house a happy event, I don’t see the advantage of these little monsters in my house.