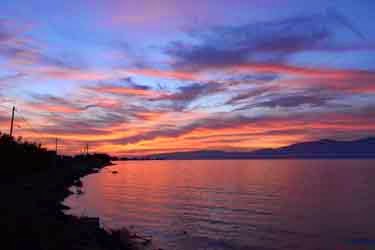 (Cloudy sunset at the Gulf of Kalloni)

When I awoke this morning and went outside, it took me a while to see what was missing. Many times I have looked out over the sea and mountains, but today there were no clouds in the sky. Would this day be one of the very few cloudless days of this summer?

Clouds arise when humidity is sufficiently high that water vapour high in the sky condenses into raindrops and ice crystals. Clouds seem to do whatever they like and often make unexpected moves. Yesterday, I had a telephone conversation with a friend and I told her that at any moment there could be rain on the island, because huge thundering ‘cauliflower’ clouds above Turkey seem to attack the Lesvorian coast. When the call was finished and I went outside, the threatening culprit had totally vanished and the clouds had retreated far into the Turkish countryside. Now you probably think the telephone conversation was hours long, but the disappearing act took only fifteen minutes.

This cloud theatre above Turkey is not new. Over the summer, more than once, you could enjoy a performance that consisted of attacking and retreating rumbling thunderclouds, while the island didn’t get hit by even one drop of rain. But equally it also happens that this voluptuous mass continues its surprise attack so quickly, that before you can run for cover, you will be soaking wet. And they are smart, those clouds, because after discharging their water, they disappear as quickly as they dropped the rain and suddenly you will be looking into a cloudless sky.

This summer the cloud theatre was pretty active in Greece. Many a tourist did not appreciate their performances at the beginning of the summer, because the rain continued repeatedly until the middle of June. But also in July and in August clouds were hanging out in the sky, a bit bored but ready for some action. They were just like naughty kids: as soon as they saw an opportunity, they caused some uproar. They made it rain on several occasions in July as well as in August, which is very rare for a Greek summer.

Some weeks ago they even presented a very special night performance, so unusual for Lesvos. One night, I had dinner with some friends in Vafios and when we were driving back down to Molyvos we saw low clouds besieging the village with long stretched fingers. Our first reaction was that there must be a big fire somewhere, but upon approaching the village, there was so much condensed humidity that it could only be clouds that seem to have fallen from heaven. It did not roll out of the sea, like sea mist, but came in a mysterious way from the land. First the castle was swallowed and then the entire village and when we arrived in the village you could not see a hand before your eyes (a Dutch expression saying that the view is very poor). The people that we could see roamed around in a kind of chaotic way, because nobody knew what was happening. For a while Molyvos seemed to be the village out of the famous movie The Fog (1980), where a coastal village gets engulfed in a thick fog, bringing with it the ghosts of mariners who had died in a shipwreck.

It could have been a nice finale for the summer theatre season, but obviously the clouds were not yet ready to give up showing their tricks. As soon as September started, they ganged together, multiplying themselves and took the colours of frightening grey and black. This time they were ready for some heavy ‘pop-up’ performances. So when I wanted to show the beautiful place of Agia Anayeri to friends, we were surprised with a thunderstorm play that was so heavy that for a few seconds I was afraid that the Mt Olympus (on Lesvos) had joined the play with a volcano eruption and for days after my eardrums were still roaring. The show did not move from the mountains and had us captured for ninety minutes in the local taverna, where we happily found shelter, and drank lots of coffee. After we finally were able to be on the road again, in half an hour we reached the coast and you probably will guess it: all clouds had disappeared from the sky.

This cloud company stayed for many days above the island and enjoyed itself with many such performances all over the island. They even frightened tourists who had fled the island in May or June due to the bad weather and who had returned to the island hoping for a second chance holiday and a cloudless vacation. The rains also woke up the snails much too early (they usually finish their big summer sleep after the first rains at the end of September or in October) and drunk from the rain they were chased onto the roads where they were picked up by greedy Greek hands to be thrown into the stew pots. Snails are said to taste the best just after their summer siesta.

The advantage of a summer full of clouds is that on most evenings you will be presented with a sparkling sunset. To be honest: a cloudless sunset is boring and these water masses are the ones who can add spectacular colours at the sky as daylight is fading. Even the last Supermoon, who performed this summer three times, was less sensational than the cloud theatre. Last night he shined big, bright and yellow over the Lesvorian landscapes, but the orange ball going down into the Aegean Sea was just as impressive due to some clouds.

I am wondering if sardines like clouds. This summer most of the sardine nets in the Gulf of Kalloni, remained empty. It seems that there are some years that sardines do not come to the island in their usual big numbers and so my favourite dish of salted sardines (sardelles pastès) was hard to find this summer. Was it the clouds that stopped them from coming because they could not show off their silver coats in the sunshine or was it a bunch of dolphins guarding the entrance to the Gulf, feasting upon all the sardines trying to get in? This year for sure one speciality of Lesvos will be rare: tinned salted sardines from Kalloni.

Meanwhile some minuscule clouds have appeared over the horizon. But they look friendly and innocent – in Holland we call them sheep clouds. I hope they predict a beautiful end to the summer, free from a cloud theatre: kalo ftinopero!