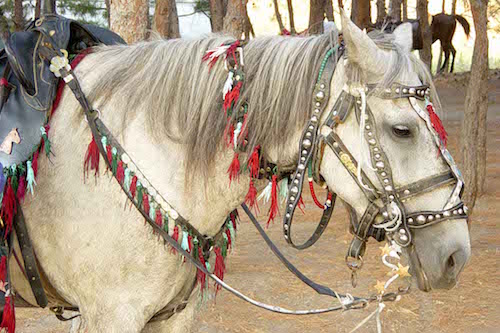 It is about a year ago that the Donkey King of Lesvos died. I do not mean that he was as stupid as a donkey (are donkeys really stupid?). He might have been stubborn, yes. But he embraced life as it came, loved to have a filled glass to hand as well as a woman to flirt with. He was a Greek like Zorba, a character never to forget.

It’s not only Michalis who is missed: but also his donkeys who used to ride with tourists on their backs into the mountains or cause traffic jams on the boulevard of Eftalou. The clappetyclap of their hooves now died away.

The horses have another story. They seem to be pretty busy on the island. The garbageman in Molyvos for example tromps his donkeymulehorse early each morning over the cobbled streets, there where no car can pass. The same for the olive harvest: in the areas difficult to reach, horses are used as pack mules. In the summer horses are fully booked for the many traditional celebrations. Every village and each church, even those far afield, organizes a yearly festivity, some even have exciting horse races. For a small group of horse lovers, the tradition is to attend all those small festivals on horseback.

Lesvos does have a tradition with horses. Its capital Mytilini is named after the sister of the legendary horse rider Hippolyte, queen of the Amazons. There are archaeological finds proving that once the island was part of an Amazon Empire, where the women, who ruled without men, were skilled in making war and love.

More and more myths seem born out by real history: it can no longer be denied that there once existed women tribes. Some think the Amazons once drove their horses around in Libya, or in Anatolia or in some of the eastern Greek islands like Lemnos and Lesvos. An archaeological site in southern Ukraine, where they discovered the remains of female warriors who rode horses, may prove that the Amazons came from there. Or maybe in ancient times you had more than one state, where women after emancipation, took up all the roles of men.

So it is possible that once, many centuries BC, an approaching cloud of dust on Lesvos meant that men had better hide – because the Amazons did not care about the ‘#me-too’ rules and just killed men right away or towed them away as slaves behind their horses. If a man was handsome enough, before dying he might have been given the experience of a good shag. Those sturdy women did need men for their propagation.

Clouds of dust now follow 4WD’s, driving on the dirt roads, trying to get a glimpse of history. They might meet an Amazon, but those are mostly not-so-dangerous tourists who have rented a horse at Ippos in Molyvos or in Toumba, high in the mountains above Plomari.

For sure Lesvos is one of the most authentic islands of Greece, but also here history is advancing slowly, burying donkeys and Amazons under its dust. At Thermi there is the biggest excavation that proves that once this mythical tribe of women lived here. The city that now arises from the dust thanks to careful digging has lots of parallels with the Amazon town on the neighbouring island of Lemnos. This fortified city, dating from the bronze age, has been named after another notorious Amazon: queen Myrina. She ruled over an invincible army of women warriors, that even defeated more than once the mighty army of Atlantis. She came and conquered all the way to Turkey, further even than Ephesos, a city which is said to have been built by Hippo, another Amazon Queen.

Last weekend Agia Paraskevi celebrated its controversial bull festival, where the only bull participating was ‘sacrificed’ and eaten. I am not sure if they still butcher the bull in a ritual way in public. In any case it is more of a horse festival, where most horses of the island and even some from neighbouring islands, come to participate. Beautifully decorated, they thunder through the streets, have a drink at terraces, try to win some of the many games and they do dance, just like the people.

It is here that new Amazons will be born. More and more women come on the back of a horse to share the festivities. Beautifully dressed, they mix with the excited horsemen. The women of Lesvos slowly emancipate. Be careful, gentlemen: when they start liking what they do, maybe, just maybe, they might set up a new army of Amazons.