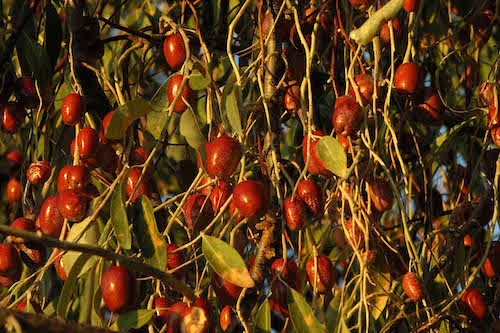 (Sweets from the Russian olive tree)

Even after two years the leaders of Europe could not save Greece from an economical downfall, nor could they stop the crisis in Europe. Alexander the Great only needed ten years to conquer half the world.

Imagine that just to travel on foot to India nowadays would take you more than a year. And Alexander, who dragged an army of ten thousand behind him, wasn’t simply doing a pilgrimage like a walk to Compostella (Spain). His forces did more than kilometres per day; during their travels they were busy fighting bloody battles, Alexander entertained himself with the people he conquered and made sure that his army was invincible.

His army was good at inventing military devices, like the torsion catapult, but it is also said that Alexander invented shaving. He insisted that his soldiers shaved every day in order that during battle the enemy had no grip on his soldiers’ beards.

Alexander not only conquered half the world; he also changed it. He spread Greek culture far and wide and in return his soldiers experienced and acknowledged new cultures. And, believe me, they certainly brought home lots of things, like apples and aubergines, from these foreign countries,.

Alexander came across the Sardian nut tree, not so far from home, in Sardis, the capital of the ancient empire of Lydia (West-Turkey), which had been conquered by the Persians before Alexander himself. Obviously much taken by that tree, he ordered his army to plant Sardian trees all over Greece. Later the Romans dispersed this tree even further through their vast empire.

And this is how the chestnut tree, as the Sardian nut tree is now known, came to Europe. In Asia, chestnuts had already been known for thousands of years as a staple food and when people couldn’t afford to grow corn, or when a harvest went wrong, they would use the chestnut to make flower for their breads.

Even though the Greek kitchen has a large variety of chestnut recipes, like stuffed turkey, garlic sauce with chestnuts, rice with chestnuts and chestnut cakes, nowadays you will mainly be served roasted chestnuts when visiting one of the chestnut festivals in Greece: in Kastanitsa (Arcadia), Paleochori (Kavala), Damaskinia (Kozani), Karitsa (Larissa), Arna (Laconia), Elos (Crete) and in Agiasos on Lesvos.

I love chestnuts, but I also hate this fruit. I enjoy eating them a lot; but I hate to peel chestnuts.

When I go to the chestnut wood above Agiasos I am always tempted to bring home a large bag of chestnuts. There are thousands that wait to be picked up. Once home I roast some and then I gather courage to peel some for a chestnut puree. To do this requires some time. With a sharp knife you make a cross in the outer shell, then you cook them in some water for a few minutes and then you can remove the outer shell and start peeling them.
Chestnuts don’t have a smooth skin, but rather like walnuts, the skin has a ribbed surface with folds with requires a lot of patience remove.

No sooner have I made the puree, then this delicacy is consumed. And even that I intend to make another one, I usually don’t fancy doing it — so I will never make it nor do something else with the rest of the chestnuts.

Now I find myself with another basket full of chestnuts brought back from Agiasos. The first ones have been roasted. And even though it was a real job to peel them I enjoyed them a lot; but preparing another chestnut puree, pfffff, I just can’t face it. Last night I took a look on the internet, hoping to find an easier way to peel them. And I did. I found a new tip to get rid of these nasty skins. I immediately commenced work to test the tip.

Eureka! It does work! And it’s even more simple. So instead of the dangerous job of making a cross incision on the flat side (when before you know it your knife shoots across the hard surface of the outer shell and causes cuts your fingers)– with a big knife you just have to chop the chestnuts in half. You put them in a casserole, cover with cold water, boil the chestnuts for some minutes and then you pull off both their skins with pincers. If I do like this peeling method, I might use all the chestnuts to make a nice chestnut bread and I might even try out a recipe for the famous French marrons glacés.

While experimenting with the chestnuts, I took some sweets from the ‘Sweet Tree’ to roast them on my new woodstove. They come from the Russian olive tree or silver berry (Elaeagnus angustifolia). A neighbour told me that when she was a child they used to roast and eat them. According to her they tasted like marshmallows. The tree looks like a weeping willow and its fruit is like light brown olives. When raw the inside looks like candy floss but their taste is dry and mealy. My finding is that when you warm them up (slightly roasted), they don’t get a taste like a marshmallow but more like a warm candy floss. Which is not bad for a sweet you can get free from nature. I can imagine that roasting these Russian olives will be a good substitute when chestnuts are not around.