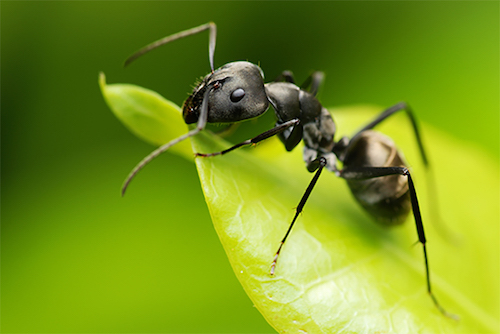 When reading about the ant world you will come across plenty of surprises especially in regard to their super organized life. When living close to ants, you will have plenty of irritations. Even though they are very smart buggers, you’ll want to declare war to them.

Recently ants discovered the bread bag hanging on the door in my house. The shock was huge: cutting into a loaf where tens of ants jumped out. I found it so unbelievable that after so many years they had finally discovered the hiding place of my bread that I first thought there must be ants at the bakery. But, of course, the baker does not bake bread with ants.

By early spring the invasion of ants has already started. There are different kinds of ants terrorizing the house: just barely visible bonzai-ants and the somewhat bigger black bullies. One night I even found an albino-colony hiding under my sport shoes. In the morning I shook out the shoes, but no stowaways were to be found, it bothered me nonetheless when walking — imagine your toes resting in a squirming ant’s nest.

Those little bitches force you to clean all the time, something I really hate. Whenever you put an empty coffee cup in the sink: ten minutes later it will be full of ants; whenever you don’t clean the chopping board where you cut the bread, you will be confronted with a bunch of ants having a picnic; breakfasting with toast while working on the computer encourages the ants to steal the crumbs. I have given up brushing my desk afterwards with a towel: let the ants clean the mess, they are known as big cleaners, I am not.

Ants do bite, float, fly, swim, search, carry, look after, lay eggs, steal and kill. They are mostly female, men are only used for a one night stand with the queen. They have solutions to everything and can live in all kind of climates, like a desert. When a queen finds a safe place where she can house her people, her empire can extend to millions of subjects and her town, mostly underground, can grow as large as several football fields.

I’d best not think about the idea of such a room and tunnel system under my house. The royal suite is where the queen does nothing else other than lay eggs, alongside it are the nursery rooms with the larva and the nurses, and around those are the rooms for the workers, soldiers and scouts.

My house, above it, is a sort-of Ali Baba’s cave, full of sweets. Like the pot of honey. But that has, for years now, stood like an impregnable rock in a pool of water. I once saw a group of soldier ants taking swimming lessons in order to get to the pot; they probably were desperate for food but this trend never caught on — keeping the honey still ant-free.

Outside I see a trail of ants marching over a path, then through the dry grass towards elsewhere. They might be moving into a new house, because they carry plenty of stuff like pieces of grass and odd little white balls. Maybe they are marching towards their new house, after their city was flooded by that first shower after summer that dropped masses of water on the island — or to a cozy winter palace, to stay warm during the colder months. Most of the ants are supposed to retreat to their warm nests, but now that the summer does not want to go, the ants have not settled in their nest but continue their raids.

Living an ants’ life is not without risks: they regularly battle for weeks against different ant populations, they eat their enemy or naughty sisters and when they are very hungry they even eat their children. That is why they grow must (mold) and keep lice to ‘milk’, a regular source of food. The must is grown inside, the lice are kept outside. I wonder if my garden is part of their meadows, because my flowers do not lack lice.

Ants sometimes do work together with other populations, insects, plants or trees. They obtain living space in return for food, or get food in return for offering protection. I also would like to have such a partnership: for instance, if the ants would go through the house at night between 2am and 6, making it all dust and crumb free, if they would do the dishes and make everything shiny then I would give them – say – two spoonfuls of honey a day. Nice dreaming: to be released from those troublesome ants, you have to live on Hawaii, Iceland, Greenland or Antarctica.