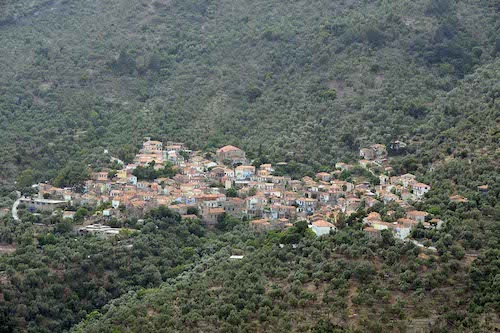 The name of the most ugly town of Lesvos is Beauty: Kalloni. Better for it still to be named Arisvi, a very old city now absorbed by the much newer Kalloni. Arisvi was once an independent state and was named after one of the daughters of the legendary Lesvorian King Makara. The other four daughters also were given namesakes: Mytilene, Mythimna, Andissa and Issa. That last name is uncertain. It could have been Eresos, although historians say that Eresos was one of the sons of Makara.

Some will wonder where you can find Mythimna or Issa. Issa is far from Lesvos, in the Adriatic Sea. Nowadays a Croatian island called Lissa. It was the Greek tyrant Dionysius the Elder who, in the 4thcentury BC, founded a colony on the island, called Issa. The only thing left of Issa on Lesvos is a mysterious portrait in rocks, not too far from Kalloni.

Greeks do not like to use foreign names – Istanbul is still called Constantinopel – but they cannot get rid of one Turkish name: Molyvos (city of lead), the Turkish name for Mythimna. This Greek name you will only still see on road signs, leaving uniformed tourists lost and confused.

That won’t happen with Ayvalik, because that little town is at the other side of the sea, in Turkey. When it was still mainly populated by Greeks it was called Kydonies. After the Greek-Turkish war in 1922 Greek refugees from Turkey built a new village on Lesvos: New Ayvalik or Nees Kydonies: a boring little village with relatively new houses and straight roads. Below, at the sea, is Skala Nees Kydonia, a much prettier harbour hamlet. Skala means stairs in Greek, making it easy to remember that all Skala’s are down at the sea: Skala Eresos, Skala Sykaminias, Skala Loutron and so on.

Up until the 19thcentury, villages preferred to keep themselves hidden high in the mountains. At the coast you would find some humble fishermen’s huts, but it was not safe there. The sea was a popular place for pirates who came ashore regularly to get provisions and women. That did not happen in a nice way and often entire villages were put to the torch. The coastal village of Petra (rock) has been named after the monolith on which a little church with an icon of Maria is settled. This Maria could not prevent the village from regularly being raided and burnt to ashes.

Once, on a beautiful day, pirates disturbed a wedding. The party was just beginning when the barbarians came onshore. The bride had a narrow escape with her groom. They fled into the mountains on horseback and even though the bride lost first a shoe and then a sleeve left hanging at a tree, they only stopped when they thought they were safe. This is how the long stretched-out village along a sandy beach at the very end of the Bay of Kalloni got its name: Nifida (bridal). The story goes that areas in the vicinity were named after the lost shoe (Papouzia) and the sleeve (Maniki).

On each Greek island you may find a village whose name ends with chorio (village). In ancient times the capital of Lesvos was above Plomari (although that didn’t yet exist): Most chorio’s are found around there: Megalochori (big village), Kato Chorio (under the village), Neochori (new village) and Paleochori (old village). Only the village Skalochori (stair village) is in the north of the island. After Megalochori was destroyed by wildfires and piracy was under control, the city of Plomari was founded (its name a derivative of flomos, a plant you can find in its surroundings).

It is said that Lisvori (named after Lesvos) was built on the ruins of the old city of Lesvos (that gave its name to the island). Archaeological finds prove that this region was already populated in 2000 BC, making it possible that once Lisvori was the capital of the island.

Another popular name for villages is Pigi: water well. On Lesvos you will find Pigi close to Komi (city). I would have called these two villages Kalloni and Kato Kalloni: they are beautiful! At the Gulf of Geras you will find an even smaller village called Pigadakia (plural and diminutive for pigi). At the other side of the Gulf is Pirgi (one character more), meaning a fortress. But there is no castle to be found in the neighbourhood, nor when you drive down from Pigadakia to another Pirgi.

Vafios, where they used to paint fabrics, Ypsolometopo, situated up high and offering splendid views, Thermi, named after its healing hot springs, Sigri, known for its safe harbour. Driving around Lesvos means driving through history. You can also just look at the map and dream away about how life once used to be on Lesvos. Kounouroudi, Faneromeni, Lapsarna, Tzythra, Mystegna, exciting names that all can tell fascinating stories.