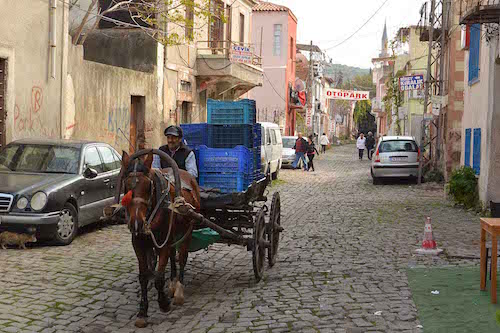 Finally, after a lot of wrangling, the international customs post in the harbour of Petra has been opened. The only remaining question is: for whom? Is it for sailing boats from Turkey? The post has been created for an excursion boat, which however has not yet shown up and probably will not arrive this year. So now we have a custom post with officials who have nothing to do and it is still impossible to go to Turkey from Petra.

If you want to visit our neighbouring land from the north or south of the island, you still have to travel very early in the morning to Mytilini to take a ferry to Dikili or Ayvalik. Although it still is worth going, especially to Ayvalik which is a nice place with historical interest to visit.

Once Ayvalik, also called Kydonies, was even pretty famous in Greece. In 1773 this little Ottoman city, with a majority of Greek citizens, had so many privileges that it could operate like a free city. This came about because a Greek priest saved the life of a Grand Vizier. Hospitals and all kind of schools were built. Education was taken so seriously that Ayvalik soon became the Greek literature centre of the whole of Asia Minor. The Greek Language School was reknowned for its number of well known Greeks teachers, like Benjamin of Lesvos.

In those times there was also plenty of commerce between Lesvos and the Anatolian coast. On both sides people lived from trade in oliveoil, soap, leather, fruit and fish and many boats sailed between both sides of the Aegean. There were no customs barriers and the only obstacle was the possibility that you had to pay a small harbour fee.

In 1821 the Greeks started their revolt against the Ottoman occupation. Many pockets of resistance sprung into life, amongst them one in Ayvalik with about 600 members. However the Greek fleet did not succeed in liberating the eastern islands and the coast of Asia Minor, where many Greeks lived. Only part of central Greece managed to shake off the Turks. After some attempts Ayvalik was besieged by the Sultan’s army and put on fire. Most of the inhabitants fled the city (it was estimated to have a population of 40,000) to find security on the nearby islands (one of which, I guess, was Lesvos). However in 1832 the Sultan allowed the citizens of Ayvalik to return to their city and they started to rebuild the town and their fields.

Soon Ayvalik flourished again thanks to its commercial and cultural life. But at the beginning of the 20th century Turkish nationalism arose, which caused Ayvalik to begin to lose its privileges. When the Ottoman Empire choose the side of Germany in the First World War, lots of Greek Ayvaliotes were conscripted into the army and priests and wealthy civilians were accused of being spies and executed. According to Wikipedia there were so many men taken that the production of oliveoil came to a stop. Because the Greek oil from Ayvalik and Edremit was so famous, some 4500 Greek families were ‘imported’ to ensure the continuation of the production of this quality oil.

Turkish Nationalism grew even more after the loss of the war, partly because of the (for them) humiliating Treaty of Sevres. The Greek – Turkish war of 1919-1922 (in which both parties were guilty of massacres) ended with a large population exchange (exodos) between Greece and the new state of Turkey. More than a million Greeks, whose families had lived for centuries in Asia Minor, were forced to move to Greece. The majority left for the Greek mainland, but some sixty thousand of them ended up in the North Aegean islands (amongst them Lesvos). In Mytilini there is a commemorative statue of a refugee mother and children and in Skala Loutron there is a small museum displaying all kind of artefacts brought by the refugees.
Some 40% of the Greeks now claim that their ancestors came from Asia Minor. The Greek inhabitants of Ayvalik were sent to different parts of Greece, while the Turks from Lesvos (and from Crete and Macedonia) settled in Ayvalik.

From most parts of the island (excepting the south-west) one has a view over Turkey. It is strange to realise that the far side of that country is now overrun with hundreds of thousands of refugees. For years now smaller numbers of refugees enter Greece (including Lesvos). But what’s happening now at the Turkish-Syrian border resembles a biblical catastrophe and reminds me of the masses of refugees during and after the Greek-Turkish war, when warmongering produced such fear that large groups of people fled their homes and lands.

Now, not even a century later, the old world is again on the move and conflicts flare up everywhere. Even though for some people the conflict seems to be far away, it has reached the Turkish borders. And soon enough the whole of Europe will be involved, just like in the times of the first World War and the fall of the Ottoman Empire.

I have just been reading a novel that takes place in that time when the nationalists led by Kemal Atatürk were fighting the Treaty of Sevres and did not listen to any of the Allies who occupied Istanbul: L’autre Rive du Bosphore (as far as I know not yet translated in English) from the French writer Theresa Révay. Historically, it is reasonably well researched and gives a good opportunity to learn about that frightening time. A book, praised by everybody, that describes the international politics of that time even better is from the American journalist Giles Milton: Paradise Lost: Smyrna 1922. It’s a bloodcurdling report about the heartbreaking fall of a beautiful city, not a century ago. If we may believe the report of an Ottoman doctor in Tracing the memoir of dr. Şerafeddin Magmumi for the urban memory of Ayvalik, then Ayvalik once was a little Smyrna (now Izmir): with colourful inhabitants, a lively nightlife and a big cultural life. The above mentioned document shows that there remains plenty of the old Ayvalik, so it is still worthwhile travelling to Mytilini and boarding a boat to a part of Turkey that for such a long time was so Greek.