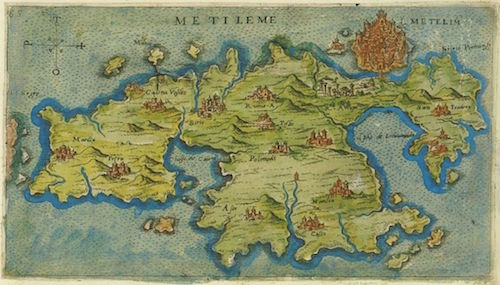 The murmurring of little waves lapping over coloured pebbles on the beach sounds like a sweet symphony lulling you asleep. The sun embraces you like a comfortable blanket, the rippling water stretches to the horizon where the dreamlike contours of another land emerges: this is the magic of a summer on the Aegean coast.

The skyblue Aegean Sea was created by unimaginable forces of nature. First there was the primeval sea Tethrys, serving only one continent Pangea, in times when homo sapiens did not yet wander around. Then parts of land broke off, the earth crust falling into different tectonic plates and the world divided into continents, separated by water. That is how we got our seas and oceans.

The Aegean sea was named after an ancient city, or after an Amazon Queen, both named Aegea — or after king Aegeus of Athens. When his heroic son Theseus boarded a ship to go to Crete where he wanted to kill the virgin-devouring Minotaur in his labyrinth, he promised his father that coming back he would hoist white sails as a sign that he had survived this dangerous expedition. Theseus defeated the monster and drunken with euphoria and love he forgot his promise: with boiling black sails he approached his hometown, making Aegeus so sad that he threw himself into the waves of a sea, soon named after him.

Nowadays thousands of people jump into the sea, only to paddle around. In the times of Aegeus swimming was not yet a recreational sport; although maybe there were a few people knowing how to cross a river or dive for fish, sponges or pearls.

It was around 1850, when it was said that sea baths were healthy and the beach became a place to be. Over a century later mass tourism invaded the Mediterranean coasts, thanks to the new rights like holidays and better wages for the working class. Before, it was mainly the rich who could afford to explore the mediterranean countries where they rented or bought villas at the seaside.

Now lots of people dream about having a house on the Aegean Sea, but in earlier times this would have been a nightmare: the beach was a dangerous place where bloodthirsty pirates came ashore and sad shipwrecks landed. There were only a few poor fishermen living on the shores, their daughters no chance of having a good marriage.

Times have changed enormously, just like the coasts. Millions of years ago when crashing plates created the volcanoes that spewed up lava from the boiling inner earth, Sigri was not a place by the sea. There was a primeval forest there, evidenced by the many petrified sequoias (trees that can reach mythical heights). Maybe Lesvos wasn’t even an island in those times and still chained to the African continent and full of prehistoric animals endangering the place.

After the island was born during a horrible tantrum of nature, the earth crust didn’t stop fooling around with earthquakes. Thus was the Gulf of Kalloni born, giving Lesvos’ ancient city of Pyrros a seaman’s grave close to Achladeri. Also the main parts of the proud city of Antissa got buried in the sea, leftovers of its city and harbour walls now sadly staring over the waves in Ancient Antissa. Recent digging prove that around (or even under) Lisvori, there once must have been another flourishing city.

During the historic wars around Troy (which brought us so much literature and many brave heroes) Petra – if she was already around – was not where she is now: the harbour where Achilles moored his ships in order to conquer the north of Lesvos, was more inland, towards the Mill Valley. The flat lands where Petra now stretches herself lazily under the sun, was caused by land and mud slides. The famous Maria-Church on the giant rock in the village centre was then surrounded by water.

Mytilini was founded on an island just off the coast. It was separated from the mainland by a canal that connected the south and north harbour, until the city started to expand, the canal silted up and the elegant marble bridges were of no further use. The major shopping street Ermou follows the line where this canal once was. On a map of Lesvos from 1597 the bulging island of Mytilini with pretty buildings beams like an evening star. The maker Giacomo Franco seemingly was not so impressed by the rest of Lesvos, because the north and west were poorly represented, making you wonder where is Mythimna (Molivos) and its castle, he placed Petra with her feet nearly in the Gulf of Kalloni and Sigri probably taken away by pirates. On other maps you see the same misinterpretation, or would they have been all copies? Another – better – map from 1607 or 1612 clearly shows Mythimna, but has forgotten Petra. Old maps of Lesvos, full of mysterious castles, rivers and islands, have plenty of these enigmas.

The sea has not finished with its monkeyshine. Scientists say that the continental plates keep on floating towards each other by just a few centimeters a year. In a very long long time the whole of the Mediterranean sea, including the Aegean will disappear. But that will be long after humans may have destroyed Mother Earth.