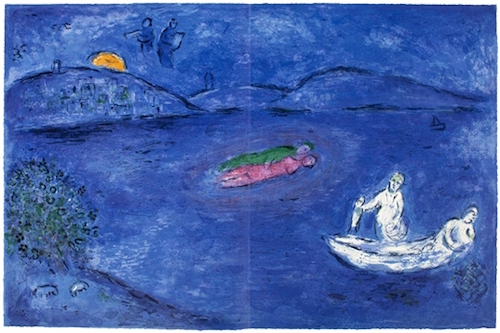 With majestic grand pianos, whining violins, some brass instruments and other instruments that make up an orchestra, some international musicians have for four days tried to reach out to the stars. The 4th Molyvos International Music Festival, whose main program was played out in the medieval castle above Molyvos, has again moved hundreds of people.

There has always been music on Lesvos, but mainly folk. Or it is the wind, descending from the mountains, rushing over the treetops, looking for other murmuring instruments. Lesvos does not have a tradition of classical music. The island has produced more writers than musical stars.

Terpandros lived in the seventh century BC. He was born in Andissa, not far from the place where the head of Orpheus along with his lyre washed ashore. That might have been what inspired Terpandros to go into music. Other sources say that he was summoned to write music by the Oracle of Delphi. He added some strings to the lyre, changed some things in the traditional rhythm of the songs and thus became famous for drinking and party songs.

Around the same time there was Arion. Born and brought up in Molyvos, he became a successful and beloved singer and zhiter player at the court of Corinth. One day, sailing back to the court after a round of performances, the sailors stole all the money he earned and wanted to throw him in the sea. He begged to sing one last song, which was a song in praise of Apollo. The Gods listened and when he was thrown into the waves a dolphin saved him and brought him to land. Coming back to the court, the king did not believe Arion, but when the sailors returned, telling the king that they ‘lost’ Arion, the king realized Arion had told the truth and he richly compensated him for his misfortune.

Tambouri Ali Efendi was born in 1836 and raised in Mytilini, in those times still part of the Ottoman Empire. When he became 18 he went to Istanbul, to expand his musical gift as a tamboura player and became one of the best of Turkey. The tamboura is a Turkish string instrument, the resonance box as big as a water mellon, with a long neck and two strings. A famous pupil of Ali Efendi was Tambouri Cemil Bey, who became the greatest composer of Ottoman classic music.

Lesvos did not progress any further in the history of classical music, until now with the Molyvos International Music Festival. The island instead has a rich history in literature, starting with Sappho, whose poems are translated and known all over the world

The island is the cradle of a Novel Prize winner: Odysseas Elytis, who received this prize in 1979. Although born in 1911 in Crete, both his parents came from wealthy families on Lesvos. The airport at Mytilini is named after him. Elytis’ poetry might be a challenge for novel readers. They might enjoy better the books of Stratis Myrivilis, who was born in 1890 in Sykaminia (he died in Athens in 1969).

Myrivilis fought in the Balkan war (1912-1913), that inspired him to write his most famous book: Life in a tomb. Later he wrote two socially inspired novels, both situated on Lesvos: The Mermaid Madonna, about refugees from Turkey in Skykaminia and a foundling who grows up into a more than beautiful girl. The other novel, The School Mistress with the Golden Eyes is about a teacher in Molyvos, the harsh traditions and village gossip. Even though those entertaining books were written about half a century ago, their topics are still relevant: refugees and gossip.

Another lovely book situated on Lesvos, but with no actual topics, is considered as the first pastorale novel in literary history: Daphnis and Chloe, a touching Greek Romeo and Julia, played out in the times that Mythimna (Molyvos) and Mytilini were at war with each other. Marc Chagall made colourful lithographs for this lovestory.

Molyvos is said to be a paradise for writers. Lots of them are inspired by the medieval little city, like William Golding, who stayed for a bit on the island and seeing children play, got his idea for his famous novel Lord of the flies. Fingers are still dancing over the keyboards to write stories, inspired by village life or the magic spell. You may even find courses given by prominent writers such as the South African Rahla Xenopoulos, also from South African, Marita van der Vyver and the Canadian writer and excellent teacher of creative writing David Layton. (see: The Talking Table.)

Now that the music has died down in the castle, it is time to start writing again. Since Myrivilis’ sad story about the teacher, in the narrow streets the tongues have not stopped gossiping. And the island has been caught in the refugee crisis, where not only terrifying stories are heard, but also strong moving ones about people reaching out to help. The island remains a bubbling source of inspiring stories.